Forest Burning and Clearing by Hudson Valley Indians 1000 Years Ago

(This is the second in a series of posts about the environmental context of human ecosystems and archaeological sites, ca. AD 800-1700). 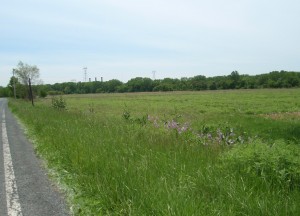 In describing and interpreting the results of her investigation of the Goldkrest Site near Albany, New York, archaeologist Lucianne Lavin (2004) referred to the radiocarbon dating of burned soil patches with associated charcoal as evidence of forest clearing through the use of fire.  This evidence was found near the transition between soil strata that indicated a stabilizing landscape about AD 1000.  The implication of this information is that as floods became less frequent and less violent due to changes in the Hudson River channel; this section of the Hudson River floodplain became more attractive for gardening to the ancestors of the Mohican Indians.

Thus began a process of clearing the Papscanee Island forest at the Goldkrest site by cutting trees and burning the timber and understory.  Over time, these fields were expanded, and beginning in the 1400s, a small Mohican settlement was established at the Goldkrest site.  This settlement may have been occupied most often during the warmer and drier months.  Although flooding most likely limited year-round settlement at the Goldkrest site, excavation has revealed ample evidence of corn production during the time of year when the site could be used.  In addition, the Mohican name for this site, Nanosech, may have referred to warm-season fishing in this location (Huey 1996).  Perhaps the use of a traditional fishing site grew to include farming as the floods slowed and became less frequent.

The knowledge that Indians burned the Northeastern forests in order to clear settlement space and gardens, or to remove under-story, replenish soil nutrients, and encourage new growth in 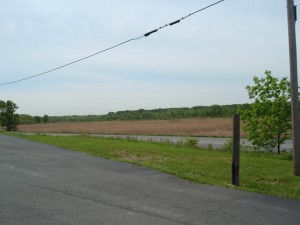 recurrently managed forests is not new, but, it seems, this information may be overlooked too frequently.  Too few archaeological surveys and data recovery programs have found evidence of these practices, although Lavin’s interpretation of the Goldkrest site helps to illustrate the role of forest burning in human ecology.  The ethnologist Gordon Day (who had already enjoyed a first career in forestry and botany) provided a seminal synthesis of this subject as early as 1953.  Day discussed in great detail the ethnohistorical literature on the Northeastern Indian use of fire for land clearing, finding that extensive agricultural fields surrounded Indian villages during the early historic period (or otherwise were available for European settlement on abandoned or relinquished tracts during the initial contact period).  Day also described the effect of set fires in the forest to clear out underbrush to make hunting and traveling easier, and foster new growth to attract game animals.

Day’s findings often are repeated by other researchers.  The ecologically-minded historians Stephen Pyne (1982) and William Cronon (1983) developed this subject of forest burning further and brought it to a wider audience, sometimes challenging the conventional wisdom of natural scientists, and influencing a new generation of archaeologists and anthropologists in New York, New England, and the mid-Atlantic region.

A little later, in time for the Christopher Columbus quincentennial of 1992, the Association of American Geographers devoted considerable attention to the pre-contact domesticated landscapes of Native America.  They contemplated an ancient world significantly shaped and managed by human activity, much of it not only intentional, but involved in complex, intricate, and traditional cultural practices.  In doing so, geographers such as Butzer (1992), Denevan (1992), and Doolittle (1992) worked to identify and dispel the “pristine myth” of Native America.  According to Denevan (1992:369), the pristine myth relates that the landscape encountered by the first European explorers in the Americas was “primarily pristine, virgin, a wilderness nearly empty of people”.  Or as the science writer Charles C. Mann (2006:5) has observed, the pristine myth is ‘the belief that the Americas in 1491 were an almost untouched, even Edenic land, “untrammeled by man,” in the words of the Wilderness Act of 1964…’

In another publication marking the Columbian quincentennial, the botanist Stanwyn Shetler (1991:225-226) continued to emphasize the iconic view of the pristine Americas, referring to this world as the “First Eden”.  Primarily concerned with environmental change since 1492, and using contrast to illustrate change, Shetler overemphasized the pristine view compared to the transformation of the Americas after European contact.  While noting that the First Eden began to change when humans first entered the New World, he wrote that the Americas before European contact largely remained “a pristine natural kingdom…The native people were transparent in the landscape, living as natural elements of the ecosphere.”

But what about all that use of fire to clear forests for planting, and to create park-like hunting grounds described by early European explorers and settlers, so nicely researched by Gordon Day?  What of the alternative to the pristine myth that Denevan (1992:369) asks about?  Was the pre-Colombian landscape, in Denevan’s words, actually “a humanized landscape, with the imprint of Native Americans being dramatic and persistent?”  (Denevan [1992] considers not only the effects of set fires, but also road, earthwork, terrace, and other Native American construction in his perspective of a dramatic and persistent human imprint).

At the same time that Lucianne Lavin and colleagues (1996) began to publish on the Goldkrest site, archaeologist Roger Moeller (1996) brought an ecological perspective to the archaeology of the late prehistoric period, exposing the pristine myth and adopting the perspectives of Day, Cronon, Pyne, Denevan, and others who had been concerned with showing that American Indians could not be considered as “transparent” on the landscape, or “living as natural elements” during the long period before contact with Europeans.  Moeller importantly drew attention to the long time frame during which humans altered the environment by creating settlement space and taking advantage of the changes that their activities created, including increases in the frequency and spatial distribution of useful plant and animal species.

Moeller also focused attention on the edge-effect, the increase in plant and animal species diversity and abundance at the forest edge.  Making clearings and expanding them over time increased the edge-effect, in turn increasing the richness of locally available food sources and other products, and effectively adding resilience to the human ecosystem.  Integrating agriculture into this patchy system could further increase resiliency, especially if different micro-environments were used for gardens.  Given today’s concern with the effects of climate change, it is particularly intriguing to think about Moeller’s (1996:65) observation that the successional effects introduced by ancient land-clearing in the Eastern Woodlands “exceed those of climate change over the short term.”  Could it be that the environmental diversity associated with humanly-created patchworks of woods and clearings– containing ample edge area– buffered Native American populations from the effects of climate change during the Medieval Warm Period (AD 800-1300) and the Little Ice Age (AD 1300-1860)?

Cronon, William
1983  Changes in the Land:  Indians, Colonists, and the Ecology of New England.  Hill and Wang, New York.

Day, Gordon M.
1953  The Indian as an Ecological Factor in the Northeastern Forest. Ecology 34(2):329-346.  (Reprinted 1998 in In Search of Native New England’s Past:  Selected Essays of Gordon M. Day, edited by Michael K. Foster and William Cowan, pp. 27-48, University of Massachusetts Press, Amherst).

Doolittle, William E.
1992  Agriculture in North America on the Eve of Contact:  A Reassessment.  In The Americas Before and After 1492:  Current Geographical Research, edited by Karl W. Butzer.  Annals of the Association of American Geographers 82(3):386-401.

Huey, Paul
1996  A Short History of Cuyper Island, Towns of East Greenbush and Schodack, New York, and Its Relation to Dutch and Mahican Culture Contact.  In A Northeastern Millennium:  History and Archaeology for Robert E. Funk, edited by Christopher Lindner and Edward V. Curtin.  Journal of Middle Atlantic Archaeology 12:131-147.