1491: New Revelations of the Americas before Columbus by Charles Mann came out

in 2005, long before I started writing in Fieldnotes. As I write this brief review, trucks are delivering and bookstore employees are unpacking 1493: Uncovering the New World Columbus Created, Mann’s history of what happened since (and largely because of) the enormous cultural exchange between the New World and the Old World.

Why should you read 1491? One big reason is related by Charles Mann himself: in the 1990s, Mann grew tired of waiting for a book to be published on the exciting new discoveries and perspectives concerning Native American history, which he had covered in publications such as Science. He states “The wait grew more frustrating when my son entered school and was taught the same things I had been taught.” So Mann wrote a very readable book you can go to as a source on some current (as opposed to many outdated) ideas about such major topics as the size of American Indian populations before contact, the origins of Indian populations, and Indian ecology. Some of what Mann says may be controversial among some specialists, but typically he has gone to the source, interviewing active researchers, reading the literature, and visiting places key to the discussion.

Now for a word on my perspective: I perform archaeological surveys in places across New York State, in fields and woods and along lakes and rivers, in places such as Coxsackie, Colonie and Queensbury, Syracuse, Ithaca, and Owego. I especially appreciate the major perspectives that Mann conveys in 1491, such as the views that Native American populations were relatively large, involved in dynamic ecological relationships, and shaped the environments in which they lived, expanding clearings, gardens, and rich forest edges, or in some cases, constructing various kinds of earthworks. I take this into account when I search for archaeological sites and interpret the results of my investigations. While I find specific relevance in Mann’s discussion of North American subjects, the portions of 1491 dealing with South America are especially important to get a fuller sense of the variety of American Indian cultural achievements. In South America, too, Indians built monumental works and shaped the world to their purposes. Here Mann explores diverse and crucial information on the antiquity of humans in the New World, the previously unexpected great age of early civilizations, and the complexity of Amazonian societies. 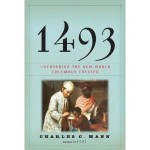 I have looked forward to the publication of 1493: Uncovering the New World Columbus Created for several months. It promises to deal with increasingly global histories of travel, exchange, and migration, and attendant ecological and economic changes affecting both hemispheres. 1493 has received glowing promotional write-ups from several authors I have enjoyed immensely: Nathaniel Philbrick (author of Mayflower), David Grann (author of The Lost City of Z), and Alfred Crosby (author of The Columbian Exchange).  I hope this review steers you to some reading you will enjoy.  Have you read 1491?