Environment Change in Northern New York: Was it the Little Ice Age or Iroquois Forest Clearing?

(The fourth in a series of posts about the environmental context of human ecosystems and archaeological sites in eastern North America, ca. AD 800-1700).

Recent articles and press releases have reported the Delaware valley study by Stinchcomb et al (2011) in which multidisciplinary research was able to conclude that Native Americans in the last 1,000 or so years had significantly changed the environment through forest clearing practices related to agriculture.  The breakthrough of the Stinchcomb study was achieved through combining an array of environmental analyses with archaeological research.

Having read my June 16, 2011 post on this subject, my friend Tim Abel shared with me an important 2002 dissertation by Roger Brown.  Brown studied sediment cores sunk deep into 3 northern New York lakes, finding evidence of arboreal (tree) pollen; non-arboreal pollen such as grasses, composites, and a variety of familiar weeds; lake bottom sediments; and frequency of charcoal deposition in the sediments, and evaluated this information in terms of the possible influence by Iroquois village populations on the accumulation of these deposits. 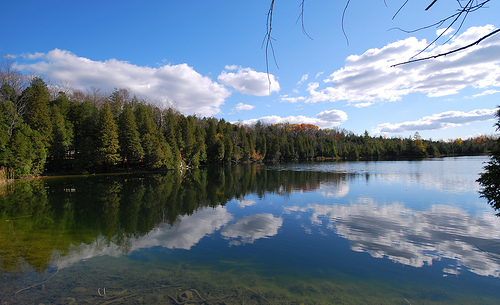 The region and sites that Brown selected for analysis provide an excellent context for this study, in some ways superior to many others.  But first, some background.  As Brown relates, in the 1980s and 1990s a controversy developed over the role of ancient Iroquois in modifying the forest, centered on environmental information retrieved from Crawford Lake, Ontario, and the investigation of a nearby Iroquois village site.  Very briefly, researchers who had initially claimed that a shift in the vegetation surrounding Crawford Lake was caused by human alteration of the environment revised their position to conclude that the changes were caused by the increasingly cold climate of the Little Ice Age (A.D. 1300-1860).  The environmental

change in question was from a landscape dominated by beech-maple forest to one more dominated by pine and oak, but with open areas indicated by increased non-arboreal pollen (including corn, and the weed plantain).  Beech and maple were expected to dominate in areas with uncleared forest, while pine and oak are typically regarded as species that come to dominate where fire has been at work. Pine in particular is considered to be indicative of the reforestation of cleared agricultural fields.

But increasing pine over time may also indicate a cooling climate, and this is the second interpretation given to the Crawford Lake data.  In this revised opinion, the nearby Iroquois village location is essentially coincidental to the pollen data believed to record a shift to Little Ice Age conditions.  However, this revised conclusion by the original researchers was challenged in a debate held in the paleoecological literature.  Now it seems more widely accepted that the Iroquois village significantly affected the forest ecology around Crawford Lake.  In addition, a 2008 post by McAndrews and Turton discusses a major impact to the lake ecology, apparently caused by the geese that came to feed on the Iroquois cornfields.

I recall the issue of ancient human impacts around Crawford Lake coming up when I worked at the New York State Museum around 1990.  Some of the young scientists in the Biological Survey were focused on the Crawford Lake data, which stood out in part due to the paucity of information about similar combinations of ancient environmental data and nearby Iroquois village sites.  I was also aware of the dearth of comparable information from upstate New York.  Roger Brown’s dissertation addresses the need for this kind of information with a thorough study based upon a strong research design.  In designing his study Brown focused on Rutland Lake in Jefferson County, which is located near numerous Iroquois village sites.  He also looked at data from cores in Goose Pond and Clear Pond, small lakes located at increasing distances from the Iroquois villages, and progressively farther into the Adirondack Mountains.  Reviews of the existing archaeological data indicated that there are no recorded archaeological sites (Iroquoian or earlier) in the vicinities of Goose and Clear Ponds (although it is noted that archaeological survey intensity is generally low in the Adirondacks).  The research was designed to show whether there were greater changes to the forest near Rutland Lake during Iroquois times; or whether the observable changes at each lake are similar to each other, more likely suggesting a pervasive effect of climate change than Native American forest clearing, and the subsequent reversion of old corn fields to pine woods.  These results can be compared to the pattern observed at Crawford Lake, answering the question as to whether changes in forest composition there were more likely caused by native land use or the Little Ice Age. 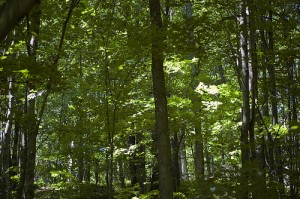 environmental change around these various lakes.  At Clear Pond, located farthest from both Iroquois villages and the ameliorating effect of Lake Ontario, beech gradually decreased at the time of the Little Ice Age, while cool climate species such as spruce and birch increased.  There was no extensive replacement of beech and maple by pine and oak.  At Goose Pond, an early beech decline ca. AD 1050 is correlated with an increase in non-arboreal pollen, suggesting human land clearing, and possibly the cultivation of Eastern Agricultural Complex crops such as Chenopodium (a.k.a. goosefoot and pigweed).  If this does represent human alteration of the environment, there must be as yet undiscovered archaeological sites in the vicinity.  About AD 1500, the seemingly Little Ice Age-related decline in beech correlated with increases in cool climate spruce and birch. 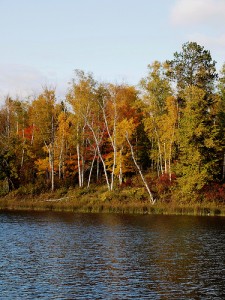 Mixed forest with birch and pine. Photo by Stpaulgirl

At Rutland Lake, there were marked fluctuations of vegetation recorded during the period from about AD 1200-1575, when Iroquoians occupied a succession of villages within a 10 km (6.2 mile) radius of the lake.  Beech declined while white pine, oak, birch, and poplar increased; that is, the replacement of beech was accompanied by a variety of species, including those that colonize abandoned fields.  In addition, declines in cedar-juniper pollen may indicate the selective harvesting of these rot-resistant woods to use as construction materials.  A decrease in willow may be related to the use of this plant for weaving material; or possibly the local extirpation of beavers, whose pond-edges enhanced or increased moist soil habitat favored by willow.  Increases in hickory and black walnut pollen may indicate Iroquois planting and protection of these trees in order to produce nut-foods. The increase in non-arboreal pollen at Rutland Lake was greatest during 3 inferred periods of forest clearance.

The finding that there are measurable differences in environmental effects 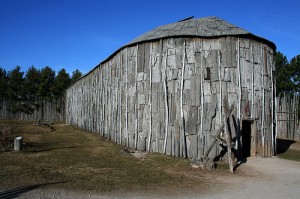 correlated with distance from Iroquois village sites, and that the Rutland Lake location shows expectable correlations with Iroquois land use both provide strong indications that, while the effects of the Little Ice Age were widespread, they are most observable in areas where human population was low or not present.  Where human population was significant, evidence of forest clearing is apparent.  Brown goes on from here to revisit the Crawford Lake data, finding that the strongest observed changes were indeed human-caused.  Brown estimates that some 45% of the land around Crawford Lake was cleared for Iroquois uses, and notes that since both corn crops and beech forest favor the same kinds of soils, beech probably declined particularly because of agricultural field clearing.

Brown’s dissertation illustrates an approach useful to distinguish between climate-forced and human-induced environmental change.  It is important reading for those interested in ancient human alterations of eastern North American forests.  There are many aspects of Brown’s study that I have not mentioned, including the very intriguing situation in which Iroquois populations abandoned the northern New York study area for about 200 years (late 1500-late1700s), and no one else moved in during that period.  This gave the forest around places such as Rutland Lake an opportunity to redevelop without significant human interaction, providing a basis for additional comparisons over a longer period.

I do most of my archaeological investigation in the Hudson and Mohawk valleys of eastern New York State, where the Little Ice Age also occurred, and where Native Americans expanded settlement space, gardens, and clearings increasingly after AD 800.  These are places where information in local lakes and Adirondack or Catskill lakes may provide suitable controlled comparisons to help understand human and climate change effects on past environments.  I wonder what evidence for changes to the forest resides in underwater sediments near my study sites, in places such as Bronck Lake in Coxsackie and Round Lake in the Town of Malta?