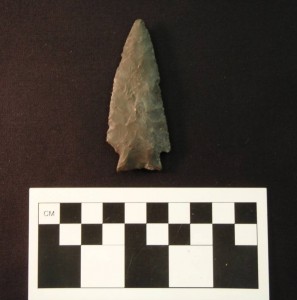 On September 16, 2011, Kerry Nelson and I enjoyed the hospitality of the Incorporated Orange County Chapter, New York State Archaeological Association at their monthly meeting in Middletown, New York. I gave a talk on “The Missing 2000 Years”. This is the period associated with Kirk Corner-Notched, Palmer, St. Charles, and perhaps other projectile point types. These point types are relatively rare in New York State, but when found indicate evidence of human occupation following the end of the Paleoindian period about 10,000 years ago.

The “Missing 2000 Years” refers to the period 8,000-10,000 years before present (BP). The former New York State Archaeologist Robert E. Funk (2004:130) used this concept to refer to the poorly known Early Archaic period. It pertains to evidence of occupation earlier than the widespread evidence of bifurcated base projectile points. Bifurcated base projectile points were in use in eastern New York by approximately 8,000 BP, and some early bifurcates may fill part of the chronological gap after 8,500 years BP. 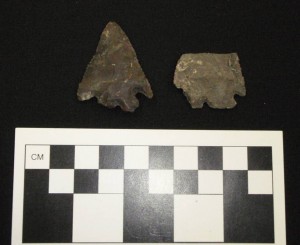 Bifurcated base points from Coxsackie and nearby New Baltimore

In the 1960s, Funk (1966:246-252) grappled with the implications of a similar 2,000 year gap in the prehistoric record of the Hudson valley, perceived then as the period between the Laurentian tradition and the Paleoindians, about 7,000-9,000 BP as reckoned at that time (research since the 1960s has refined the chronology earlier than the Laurentian, and pushed the poorly known Early Archaic period about 1,000 years deeper into the past).

Bucking more established positions, Funk (1966) argued that Early Archaic cultures must have been present in the Northeast, but were undocumented except for rare bifurcated base points and Plano-like, unfluted, lanceolate points (often referred to as late Paleoindian points). Based upon intriguing discoveries at Sylvan Lake Rockshelter (east of Poughkeepsie), Funk (1966:246-252) developed the hypothesis that the typical projectile points of the Early Archaic period would be early side-notched points that resemble Laurentian tradition point types such as Otter Creek and Brewerton Side-Notched (also see Justice 1987:61-62). Although Funk (1966) documented an assemblage with Otter Creek-like points apparently older than about 7,000 years at Sylvan Lake Rockshelter, additional evidence this old involving the Laurentian tradition (or an immediate ancestor) has been lacking at other New York sites.

Meanwhile, a more clear chronology involving stemmed, bifurcated base, and corner-notched points has been developed, largely based upon Funk’s (1993) research in the Susquehanna valley. At the same time, a complex of early side-notched points has been identified in parts of the Southeast (Anderson and Sassaman 1996; Sherwood et al 2004). Since the known Northeastern Early Archaic point forms generally have Southeastern cognates, it seems a fair question to ask whether evidence of early side-notched points also occurs in the Northeast, but may be “hiding in plain sight” if these points have been misidentified as more familiar Late Archaic point types (this harkens to Funk’s 1966 position, and the somewhat similar view expressed by Justice 1987:61-62). 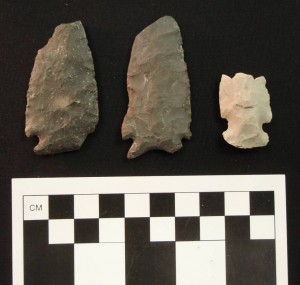 Left to right: Kirk Corner-Notched point, Palmer point with deeply concave base similar to Hardaway-Dalton, and possible early side-notched point. All from one small site in New Baltimore

My talk in Middletown on September 16 examined some of the evidence for the cultures or cultural phases that seem to have been present in the Hudson valley 8,000-10,000 years ago. Much of the evidence I presented derives from archaeological surveys and excavations conducted in the Greene County Towns of Coxsackie and New Baltimore, while some evidence was presented from Moreau in Saratoga County, and Guidlerland in Albany County. Some of the Early Archaic point types that have been found in the Hudson valley include Kirk and Palmer Corner-Notched (prevalent about 9,000 BP); and Dalton or similar triangular points (about 10,000 BP). Rare examples of Agate Basin or other Plano-like points have been recovered (suspected age, 9,500-10,000 BP). Certain corner-notched points with deeply concave bases may by intermediate between the Dalton and Palmer-Kirk types (see Ward and Davis 1999:53-54). Certain side-notched points are suspected of being very early (9,000-10,000 years old) due to association with Early Archaic corner-notched points, or the presence of Early Archaic technical attributes such as end-thinning, pronounced opposite face, alternate-edge beveling, or blunting of the base by burin removal (Justice 1987). 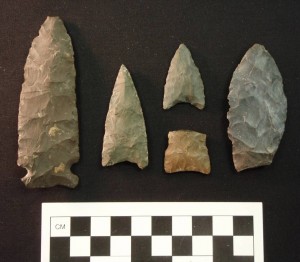 Although a general, time-sequence involving some of the point types can be constructed, extending from Dalton-like triangular (10,000 BP) to Kirk-like corner-notched (9,000 BP) to bifurcated base point types (8,000 BP; Funk 1991:53), some of the point type variability may signify traces of cultural diversity as the geographical ranges of Late Paleoindian and Early Archaic cultures overlapped across the Hudson valley (see Petersen 2004); or as migrating Early Archaic populations with different concepts about projectile points coalesced into new societies.

1991 Late Pleistocene and Early Holocene Human Adaptations in the Lower Hudson Valley. In The Archaeology and Ethnohistory of the Lower Hudson Valley and Neighboring Regions: Essays in Honor of Louis A. Brennan, edited by Herbert C. Kraft, pp. 49-67. Occasional Publications in Northeastern Anthropology, No. 11, Bethlehem, Connecticut.