(This is the fifth in a series of posts about the environmental context of human ecosystems and archaeological sites in eastern North America, ca. AD 800-1700).

A press release last year by the University of Manchester (2010) reported on the oldest evidence of a dwelling yet found in England, some 10,500 years old.  It also notes that this ancient community “kept domesticated dogs” and burned “part of the landscape to encourage animals to eat shoots”, presumably as an aid to hunting “deer, wild boar, elk and enormous wild cattle known as auroch”.

The practice of burning underbrush to encourage food for browsing herbivores and facilitate hunting also was practiced by North American Indians, as related by anthropologist Gordon Day (1953) in a wide survey of early records of North American exploration and colonial life. 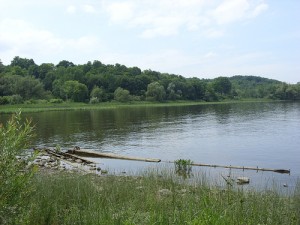 Indians in many regions also cleared large tracts for settlements and agriculture.  For example, in the acclaimed 2006 book Mayflower, Nathaniel Philbrick tells us that when the Pilgrims chose to settle at Plymouth, “The biggest advantage of the area was that it had already been cleared by the Indians.”  Land already cleared by the Indians similarly seems to have been an advantage to the Dutch settlement of the area around Albany, New York (then Fort Orange) at about the same time.  In later years, the presence of already cleared land was often a determining factor in Dutch land purchases from the Mohicans in the Hudson valley (Dunn 1994, 2000).  These cleared tracts included islands such Papscanee in East Greenbush and Schodack, other stretches of floodplain on the Hudson and its tributaries, and uplands such as Coxsackie in the Glacial Lake Albany basin.  Managing the forest and selectively clearing it away with fire and stone axes may predate the early colonial observations by hundreds or even thousands of years.

In the 1970s, when I was an undergraduate student taking archaeological field 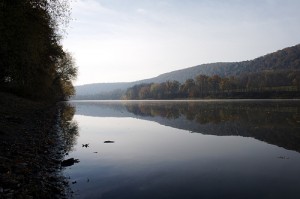 methods at Binghamton University we dug at the Cottage Site, located along a stretch of the Susquehanna River between Binghamton and Owego.  Evidence of Indian settlements had accumulated here over a period of 1000+ years, beginning no later than about AD 140 (according to radiocarbon dating).  The evidence of artifacts, hearths, and refuse pits was found in layers at different depths in the soil, with the older material buried deeper, and the more recent, from about AD 1000, closer to the surface.  In between the layers that contained artifacts were pale sediments speckled with flecks and pieces of charcoal, but containing little else.  This is something I wondered about—Was the charcoal washed in by floods? Did it come from washed-out, ancient campfires that had been located upstream?  Was it the evidence of natural fires?  If the charcoal was from natural fires, they must have happened frequently, because the charcoal was rather common in the soil between the artifact-rich layers.

Many years later, having read Gordon Day and others, I have become acutely aware of the Indian use of fire to create and expand clearings for dwelling and gardening, and, as the University of Manchester report says of ancestral Englishmen, “to encourage animals to eat shoots” in hunting grounds.  The American archaeologist Roger Moeller (1996) has observed the importance of forest edges in creating biological diversity within forest environments, as well as the role of humans over periods of time in expanding the edge areas, especially through the use of fire.  Berries and herbaceous plants grow in the edge areas, and browse is abundant for deer and other grazers, such as elk.  The practice of making clearings and expanding edge area would lead to the deposition of charcoal across landscapes that were used only for hunting and foraging, as well as those sometimes used for settlements.  In addition, controlled burns to clear out understory and alter vegetation would also deposit charcoal over wide areas. 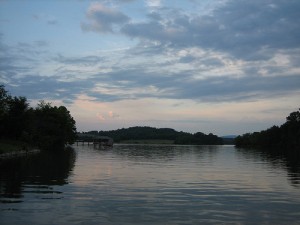 When did Native American ancestors begin to use fire in order to clear-out the underbrush, encourage new plant growth, or make clearings?   These may be very old practices, whose antiquity may only be guessed at presently.  However, studies have been conducted in a few locations that help to answer this question; some of these studies have been in the archaeological literature for a number of years.  Some of the evidence indicates that these practices were familiar and becoming more frequent 3,000-4,000 years ago.  For example, an analysis of ancient Tennessee environments by Chapman, Delcourt, and Delcourt (1989) using charcoal and other botanical data found a shift about 4,000 years ago in the frequency of species used for firewood:  from mature bottomland forest species to red cedar and Virginia pine, two species typical of new growth woods (i.e., new woods colonizing formerly cleared fields or meadows).  Based on this trend, they surmised that along the Little Tennessee River about 4,000 years ago, the forest was shrinking and the landscape was becoming more open, an effect of human activity.  Whether the human activity was primarily related to gardening, hunting practices, clearing settlement space, or a combination of these is not clear.  However, other evidence indicates that people may have been taking the initial steps toward gardening at this time, planting and encouraging native wild squash, as well as starchy seed plants such as maygrass (species of the Eastern Agricultural Complex). 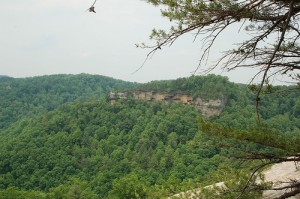 A study conducted in eastern Kentucky focusing on evidence of early plant cultivation and related environmental changes also produced some very interesting results concerning ancient human-induced changes to forest composition.  Analysis of pollen from Cliff Palace Pond shows that “Late Archaic and Woodland peoples cleared forest gaps to cultivate plants in the Eastern Agricultural Complex and that anthropogenic fires served to increase populations of fire-tolerant oaks, chestnut, and pines in upland forests of the northern Cumberland Plateau” (Delcourt et al 1998:263).  Increases in fire frequency, forest openings, and the abundance of fire-resistant species are documented at about 3,000 BP (also see Gremillion 2004:227).  It is believed that the forest openings used for early agriculture were created on limestone benches and lower colluvial slopes in the uplands, as the local floodplains were “largely unsuitable for human habitation” during this era (Gremillion et al 2008:367).

The archaeological investigation of Kampoosa Bog near Stockbridge in western Massachusetts also has produced evidence of ancient forest burning, with strong circumstantial evidence that ancient Native Americans were responsible for the fires (Johnson 1996).  Johnson and his coworkers found evidence of extensive forest burning in and near the archaeological sites under investigation.  Sediment cores from Kampoosa bog studied by biologist Charles Laing contained several forms of evidence of increased forest burning between 3,000 and 4,000 years ago.  These include an increase in the number of small charcoal particles in the section of the core from this time period.  In addition, there were increases in the number of spores from ferns that colonize burned areas, and there was an increase in the pollen frequency of a fire-resistant tree species, chestnut (As just noted, an increase in chestnut pollen was also observed at about the same time in eastern Kentucky).

As Johnson (1996:19-22) relates, there was also some archaeological evidence from chert debitage (the waste material from making tools from the fine grained stone, chert).  The patterns with which chert suffered heat damage, and the locations where heat-damaged chert was found provided important information.  In making stone tools, chert is fractured in a carefully controlled way into relatively flat pieces of debris, or “flakes”.  Flakes have two sides, referred to as dorsal and ventral faces or surfaces.  The dorsal surface is exposed to the environment before the chert flake is detached from a larger core or object that is on the way to becoming a stone tool.  The ventral side is the interior stone part of the stone; it is only exposed after the flake is detached from a larger object.  Since the majority of the flakes were found away from hearths (where accidental burning could have occurred), and because the ventral surfaces often were heat damaged, Johnson reasoned that the flakes were widely dispersed on the ground when fires swept over the ground surface.  He distinguished this pattern from one in which only the dorsal surfaces would have evidence of heat damage: If only the dorsal surfaces had heat damage, it could mean that the chert was being intentionally heated, a practice sometimes used to improve chert’s fracturing properties.  Since the heat damage (in the form of small “potlid” scars) was not restricted to the dorsal surface, but often occurred on the ventral surface or both surfaces, Johnson rejected the possibility that evidence of burned chert indicated intentional heat treatment of the chert.  Rather, he inferred that the widespread occurrence of the heat-damaged chert flakes provided evidence of forest burning that had affected artifacts from earlier occupations of the area.  Archaeological surveys and excavations at these sites indicated earlier occupation between 4,000-6,000 years ago; but an apparent intensification of human use occurred 3,000-4,000 years ago, about the same time as evidence of increased forest burning that had been obtained from the bog sediment core samples.

These analyses indicate that human modification of the Eastern Woodlands began several thousand years ago, at least in some locales.  Patterns of forest modification and clearing are probably more widespread than has been documented to date.  Meanwhile, however, evidence of ancient forest burning continues to accumulate from other places and time periods, such as the 2010  report of increased incidence of forest burning in the Ohio drainage about 2000 years ago–  a time-frame associated with Hopewellian cultural practices that may have included adoption or incipient expansion of maize gardens (Ohio University 2010).

Two future posts in this series will examine some additional evidence from Archaic and Late Woodland period sites in the Hudson River drainage.