Last week the radiocarbon dating firm Beta-Analytic, Inc. provided a radiocarbon date for an archaeological feature excavated by Curtin Archaeological in the Town of Wilton, Saratoga County, New York. The date is 8760 +/- 40 years before present (BP), which when calibrated to the actual range of calendar time (with near-100% certainty) is 7610-7950 BC. This age falls within the poorly understood period that archaeologists in eastern North America refer to as the Early Archaic (8,000-10,000 radiocarbon years BP), and it is one of only a small number of radiocarbon dates of similar age associated with archaeological sites in New York State. We are excited to receive this news at Curtin Archaeological because it greatly aids our ability to understand the Native American history of the series of small sites we have been investigating in Wilton, as well as broader aspects of Early Archaic period land-use in eastern New York.

The radiocarbon date was obtained from charcoal remaining from pine fuelwood found in a shallow, somewhat irregularly oblong pit (most likely an oven) excavated in a location known as 708 Route 9 Site 3. The pit is referred to as Feature 8, and the portion discovered in the archaeological investigation is the part that remained after 19th-20th century agricultural plowing had removed the top of the pit. 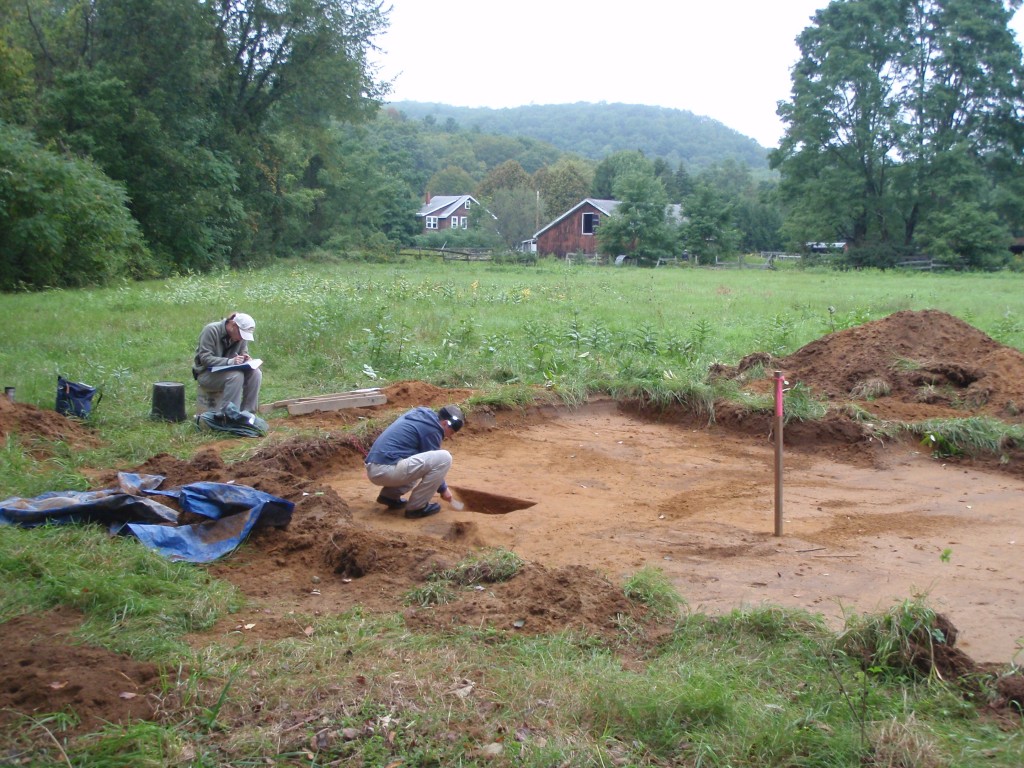 708 Route 9 Site 3 is a small archaeological site with low artifact density. The artifacts found outside of the pit include 4 chert flakes, 2 of which have traces of use-wear from cutting or scraping. Items found within the pit (besides charcoal) include two handfuls of gravel and pebbles, most of which are reddened from exposure to heat. It is not clear whether these various stones are artifactual, or simply incidental to the pit fill.

In addition to the stones, the soil within the pit had turned somewhat red from the burning of the fuelwood and presumably an episode of baking sometime around 8760 BP. Archaeobotanist Justine Woodard McKnight has recently found that charred evidence of plant foods did not occur within the pit, but that the wood in the pit was the aforementioned pine, plus other conifer wood (that cannot be identified by genus or species). It was the pine that was submitted for radiocarbon dating. It is generally assumed that the most available woods were used for fuel (Asch Sidell 2008); pine may have been especially available for use as fuelwood in 8760 BP because of the abundance of pine in the evolving, early post-glacial forests of the Northeast (as identified by Deevey 1939 and discussed more recently by Lewis and Funk 1993).

Other New York sites or locales where dates of similar age have been obtained include a group of sites on Staten Island (Ritchie and Funk 1971, 1973), a cluster of sites in the upper Susquehanna valley (Funk 1993), the Haviland site near Cobleskill, Schoharie County (Ferguson 1995), and the Dutchess Quarry Cave No. 8 site in Orange County (Funk and Steadman 1994). One aspect of the significance of the 708 Route 9 Site 3 radiocarbon date is that it resonates with the earlier obtained dates from these other locales, specifying with some precision when people occupied New York’s post-glacial landscape. This information provides a rare indication that ancient people were settling and exploiting a very ancient, eastern New York environment– a world of high-energy river systems and pine forested uplands and back-country that was quite different than the native ecosystems that would evolve in later times.

However, this radiocarbon date (and associated pit feature) also may be significant in another way. It provides an indication that Early Archaic people were active in back-country areas away from rivers and lakes, while demonstrating that their campsites and off-camp activity may result in only faint imprints upon the landscape– a few chert flakes here or there, possibly in association with a cooking feature. This level of evidence contrasts strongly to archaeological sites with more abundant evidence, sites that are often located along lakes and rivers, and that date to later periods such as the Late Archaic (ca. 4000 BP) or Late Woodland (500-1000 BP). 708 Route 9 Site 3 provides an archaeological record barely detectable (when visible at all) to archaeological methods, and exemplifies a type of site much less often selected for investigation than sites with larger and more diverse artifact assemblages.