Until recently, archaeologists combing archives for information on ancient Indian sites in the Town of Wilton, Saratoga County, New York have been able to identify only sparse references. These include a report from the 1950s of an approximately 13,000 year old Paleoindan fluted projectile point found near the Little Snook Kill headwaters (Ritchie 1957). Also available is a brief mention of from the 1920s of Indian campsites found near a mill pond on the Snook Kill (Parker 1922).

In addition to the scant archaeological references, the historians Colden (1727/1747) and Sylvester (1877) have told the story of the Battle of Wilton, perhaps the most widely known event of Native American history in the local area (the Battle of Wilton is noted on the Town of Wilton website, and described in a Fieldnotes post made on February 17, 2012). The Battle of Wilton occurred in February 1693 when New York militia and Mohawk Nation warriors pursued, caught, and attacked the French and Canadian Indian force that had just raided the Mohawk homeland, killing people and taking prisoners. Reading these accounts is fascinating, such as when Colden infers that the New York commander, Peter Schuyler, slowed down for the Mohawks to catch up with him, so he wouldn’t be undermanned when his militia attacked the enemy.

After a series of engagements near what is now the intersections of Route 9, Gailor Road and Parkhurst Road in Wilton, the French and their Indian allies fled north, escaping across the Hudson on an ice jam just before it broke up in the rising, thawing river.

Sylvester (1877) calls the escape route they used out of Wilton the “Great Northern Warpath”, and also references a recurrently used western trail through Wilton, Greenfield and along the Kayaderosseras range. The western trail is mentioned as providing a route to and from the Mohawk valley that avoids settlements at Schenectady and along the lower Mohawk; it is also a more direct route than the water route using the Hudson and Mohawk Rivers. Where the western and northern trails met (no doubt a local landmark and rendezvous point), the French and Indian allies quickly threw up rough log ramparts and fought the Battle of Wilton against their pursuers.

Recently, an archaeological investigation conducted at 708 Route 9 in the Town of Wilton has provided important new information on American Indian history in Wilton. 708 Route 9 is about 1 mile south of the battle site, and arguably, located along the old north-south trail (but south of the intersection with the western route). The archaeological investigation at 708 Route 9 fills in some of the gaps in the long native history in Wilton prior to 1693. The sites investigated are referred to as the 708 Route 9 Precontact Sites 1-4.

708 Route 9 Precontact Sites 1-4 are in the western part of the Town of Wilton, some 7-8 miles from the Hudson River. They are situated on stream headwaters near the foot of a limestone and dolomite escarpment running north and south along the western edge of the Glacial Lake Albany basin. 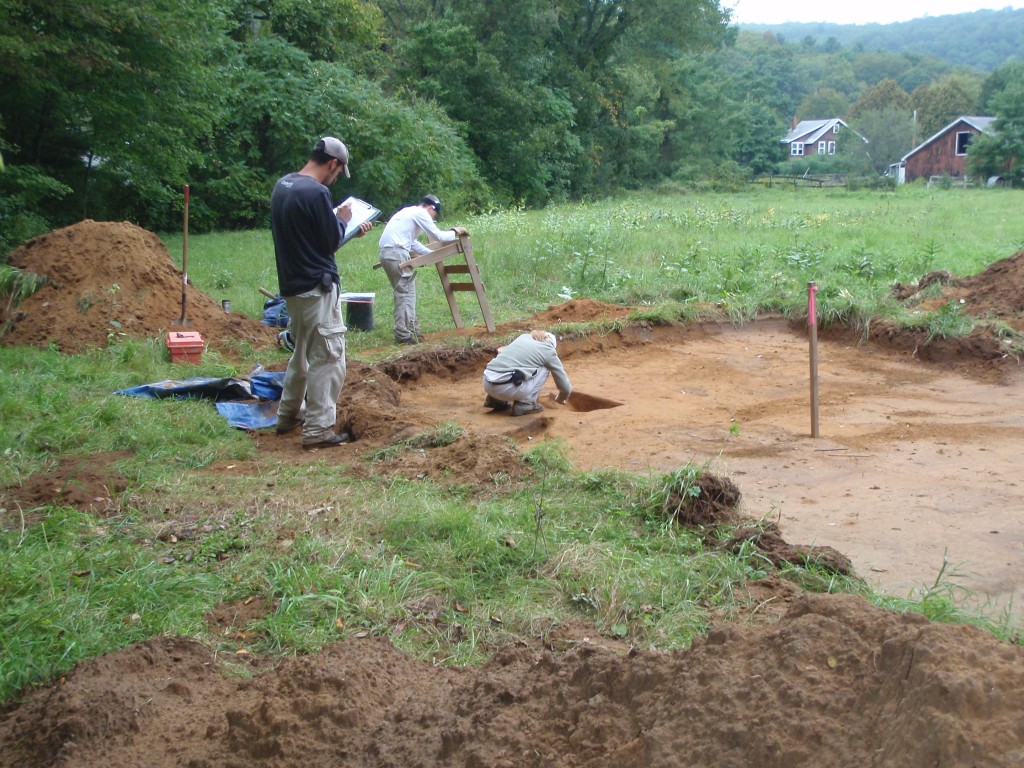 The archaeological discoveries made at these sites include a rare, Early Archaic period campsite (Site 3) radiocarbon dated to 8760+/-40 years before present (BP). This date is calibrated to 7610-7950 BC. This discovery (which included a small cooking pit) is described in more detail in an earlier Fieldnotes post. The discoveries also include a small campsite– Site 1– which was occupied repeatedly in more recent times, from the late 13th century AD to sometime after AD 1400. This later period of occupation is very interesting because some of the evidence suggests that the trails were being used more intensively as time went on, during the two to three centuries preceding the Battle of Wilton. Perhaps as native cultures changed and interacted, long distance travel became more important. The discoveries at Site 1 and the interpretation of the data will be described in more detail soon in an upcoming post.

Colden, Cadwallader
1727/1747 The History of the Five Indian Nations Depending on the Province of New-York in America. Reprinted 1985 by Cornell University Press, Ithaca, New York.