Before the Battle of Wilton: Native American Campsites near the Great Northern Trail

The investigation of 708 Route 9 Precontact Sites 1-4 was conducted before construction in order to recover important archaeological information. Not all of the sites were equally productive of new information, but Site 1 yielded data that offer a glimpse into Indian activity near the intersection of important western and northern trails during the centuries immediately preceding the 1693 Battle of Wilton. The archaeological information was obtained systematically, asking important research questions, excavating artifacts, recording their contexts in the ground, and performing analyses designed to address the research questions.

The New York State Historic Preservation Office (SHPO) determined that Site 1 could provide information important to the study of prehistory. As result, in consultation with the SHPO, the following research questions were developed to guide further study: 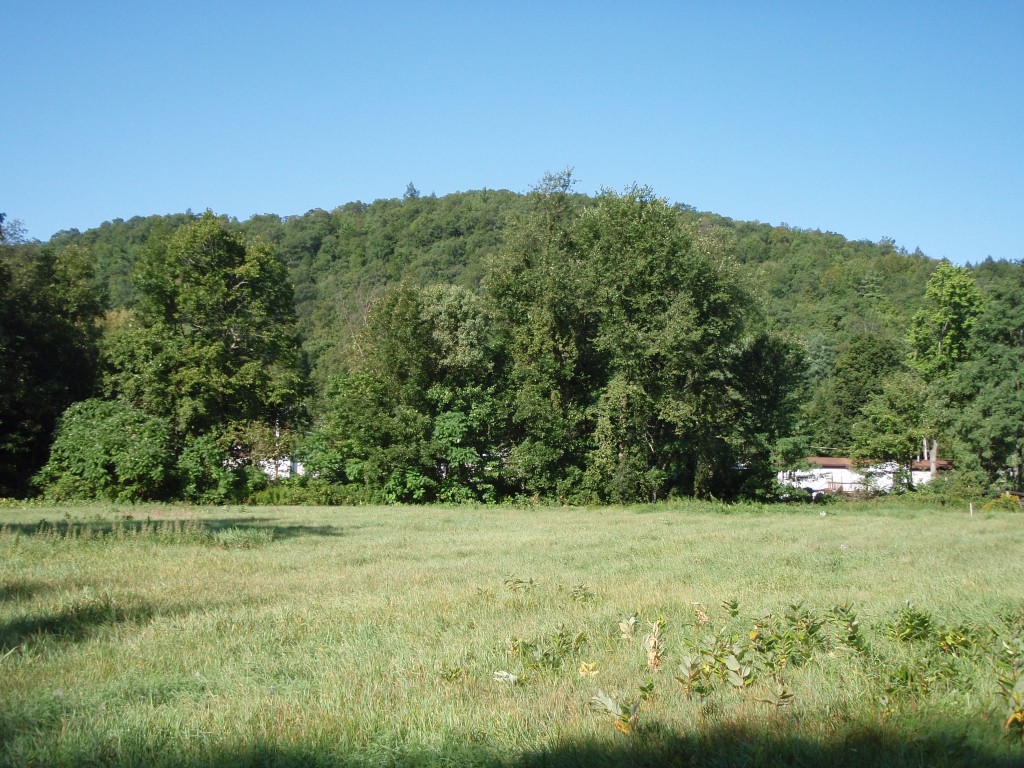 The setting of the 708 Route 9 sites. The escarpment in the background orients the north-south travel route.

The archaeological data recovery project involved a search for traces of facilities such as hearths or pits (which are referred to as archaeological features); and the recovery of additional artifacts or other data such as charred plant material that could be identified by genus or species and radiocarbon-dated.

The drama of searching involves looking but not finding, and– sometimes– finally finding after significant effort. At Sites 2-4, there was much searching but little finding, until a small but very ancient cooking pit was uncovered and documented at Site 3. At Site 1, the search involved substantial hand excavation according to different soil strata and levels, and sifting the soil through ¼ inch mesh hardware cloth before the rest of the topsoil could be removed by scraping with a smooth-edge backhoe bucket. The careful hand-excavation revealed that the soil was stratified, with a layer of fill from 20th century construction at the top; the old topsoil layer immediately below the fill; and the present-day subsoil immediately below the old topsoil. 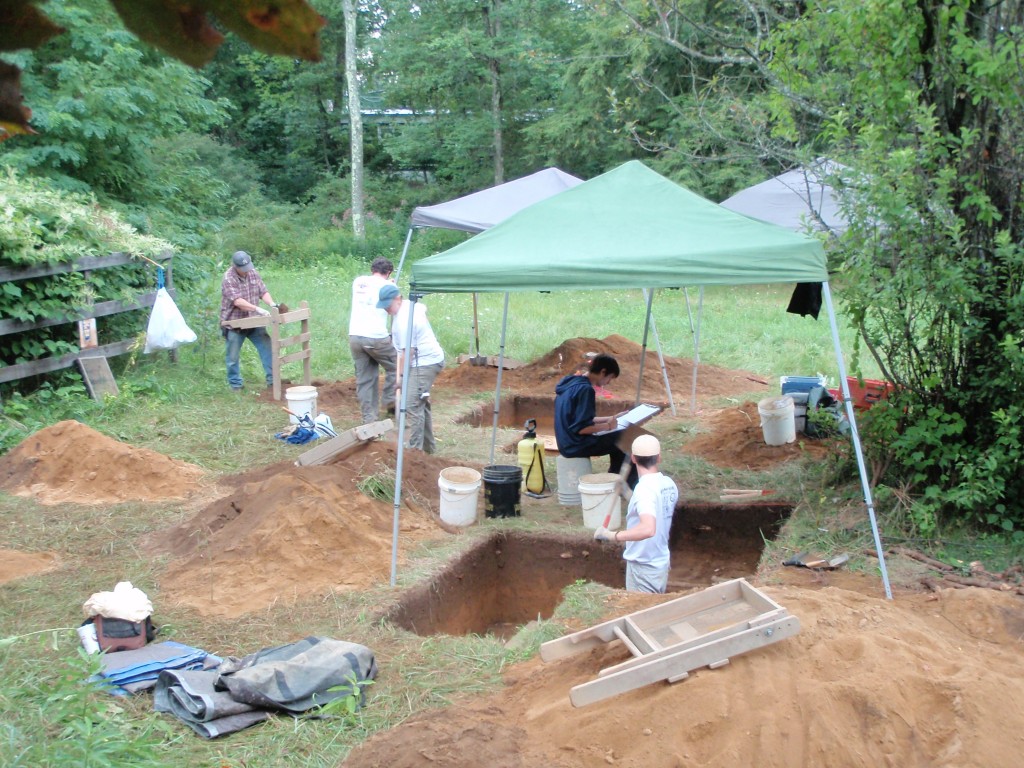 The 2011 excavation of Site 1 progressed through variable late summer weather. The dig site was covered with plywood and tarps during tropical storms Irene and Lee.

During hand-excavation, the following archaeological features were identified: (1) a small hearth composed of fire cracked rocks and charcoal in the subsoil several centimeters below the topsoil; (2) a cluster of rocks including a broken anvilstone found at the same level a short distance away (this may be a stockpile of rocks for hearth construction or cooking by heating water with hot rocks); and (3) a broad, shallow pit at the base of the old topsoil (this pit had been disturbed by animal burrowing and the growth of tree roots). A small but interesting artifact assemblage was recovered from each soil stratum. This assemblage included Native American pottery from the old topsoil stratum, as well as varied assortments of chert, quartzite, chalcedony, and slate flakes, indicating many different geographical sources for the tool-stone used at Site 1.

The analyses and findings are aptly summarized in terms of the research questions. First, the age of Site 1 is identified through a combination of radiocarbon-dating and comparative artifact analysis. The hearth in the subsoil contained maple wood charcoal that was radiocarbon-dated 740+/-30 years before present (BP). Using the current calibration procedure (INTCAL09), this is calibrated to AD 1260-1290. The pottery found in the next higher soil stratum– the old topsoil– is thin and hard, and has decoration made in incised, parallel lines. Comparative analysis shows that this kind of pottery was common at other Hudson and Mohawk valley sites about AD 1400-1600. These periods are close to the early historic era when the Saratoga vicinity was within the lands of the Mohicans (Brumbach and Bender 2002). However, during the 17th century, as Sylvester (1877) relates, the Mohawks were using the region for hunting and fishing, and eventually were involved in negotiations to sell the Saratoga and Kayaderosseras Patents to Europeans in the late 17th and early 18th centuries. It is therefore difficult to attribute a cultural association to 708 Route 9 Site 1, unless the site is recognized as within spheres of use by both the Mohicans and Mohawks. It is probably reasonable to assume that early use was more often by Mohicans, while Mohawk use may have increased later.

Second, with respect to technology, almost all of the stone recovered at Site 1 consists of flakes, the by-products of stone tool manufacture and maintenance. This being said, most of the flakes (some 66-67% in the subsoil and old topsoil contexts) are relatively small (<1.5 cm across), indicating more finishing and maintenance than manufacturing, and suggesting strongly that the stone tool assemblages during both periods were reduced in weight elsewhere, and thus geared toward transportability and mobility.  This is consistent with two patterns of site use:  (1) camping by foragers from a more permanent settlement; and (2) camping by long-distance travelers along the northern and western trails.  Both uses would have been by people residing elsewhere, but the scale of travel was greater in the second case, possibly involving travel between the Mohawk and Hudson valleys, or even more distant locations such as the Champlain and St. Lawrence valleys.

With respect to chipped stone raw material variation, the variety of stone sources increased greatly over time (from 6 to 12 major classes), while the use of local, Hudson valley, Normanskill chert decreased over time, and stone types from farther away, or with unidentified sources increased over time. For example, the old topsoil to subsoil flake ratios for the six stone types used in both strata include: 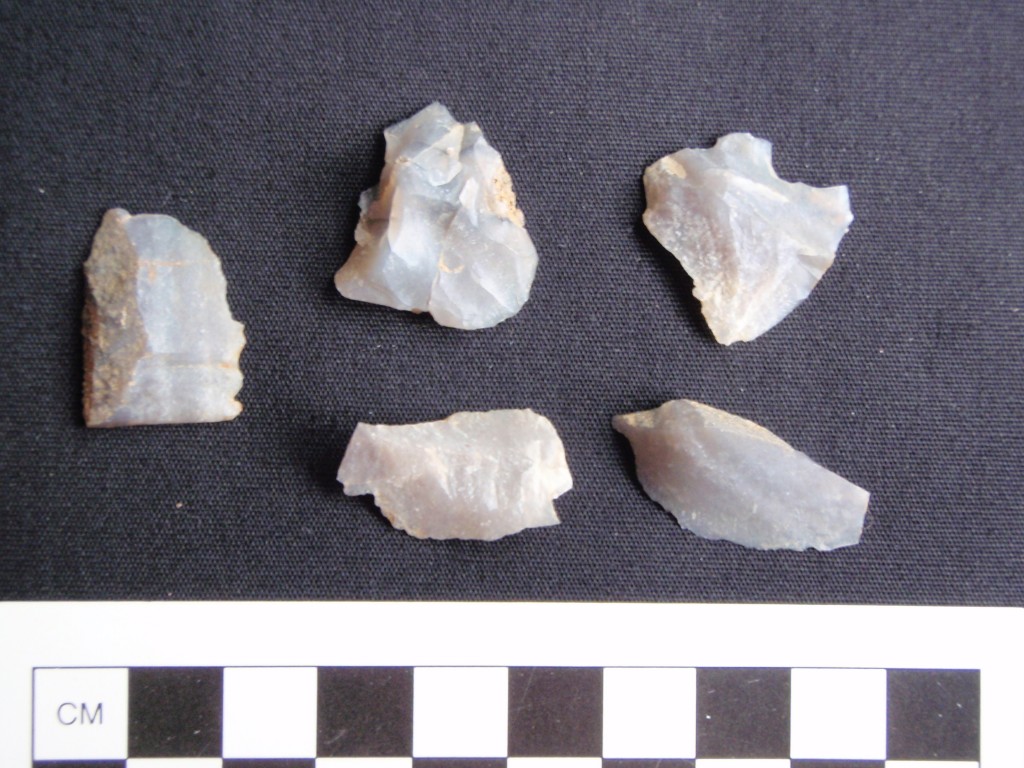 Normanskill chert outcrops to the east, within 12 miles of 708 Route 9. The other identified source-regions are at least 20 miles away, and sometimes more than 50-100 miles away. Fort Ann chert is from northeastern Washington County, New York, while the other stones shown above have unknown sources (quartzite may have been obtained at least in part from local glacial till). Several kinds of stone are not listed above, and were recovered from a variety of old topsoil, fill, or unsure contexts. It is known or suspected that small amounts of Cheshire quartzite from Vermont; Eastern Onondaga, Kalkberg, and Esopus cherts (all from south of the Mohawk River); exotic-appearing black, white, and brown-mottled chert; and slate from eastern or northeastern Washington County began to appear late in the site’s history, probably around AD 1400 or later (based upon the visual appearance of the stone, site stratigraphy, and dating).

The unidentified stone material may or may not have local sources. It is possible that at least some of the gray chert is from the Gailor dolomite that underlies much of the local region, and is reported to outcrop several miles to the west, near the route east from the Mohawk valley. Gailor chert may have provision travelers’ stone supplies before they arrived at the northern trail; or it may even outcrop near Site 1.

What the data on stone material and technology indicate about settlement patterns and land use is that Site 1 was used initially by people with good access to Normanskill chert, who probably traveled a few miles from the Hudson valley or Fish Creek area to forage in the vicinity of the site. Later, this type of use may have decreased, but people continued to camp at Site 1 as they used the important travel routes nearby. However, these folks seem to have had less access to Normanskill chert; or site use may have varied between people with and without access to Normanskill chert (possibly Mohicans and others, respectively). The increased variety and sometimes exotic nature of the stone from the old topsoil stratum is seen as related to increased use by people from a greater variety of places, sometimes traveling from rather distant places.

Finally, with respect to the question concerning substantial processing of food resources, the investigation found no evidence of this in terms of either artifacts, the types of facilities that were present, or food remains themselves. However, this question in essence presents a null hypothesis– that these sites were used for substantial food processing– and has the scientifically valid purpose of being disprovable. In the end, the finding that there is not evidence of major food resource processing is consistent with the other evidence that indicates short stays, high mobility, and modest meal preparation, when meals were prepared at all.

Taken as a whole, the archaeological information from Site 1 provides a history for the general vicinity during the several centuries preceding the 1693 Battle of Wilton, a history suggesting that the trails themselves were older than the events of the colonial wars– possibly by several hundred years.