Archaeologists cite 10,000 radiocarbon years Before Present (BP) as the end of the Paleoindian period and the beginning of the Archaic. This reflects a certain reality in the approximate timing of technological change in many regions, but as a year 10,000 BP is arbitrary. In northern New York cultures using lanceolate projectile points, most often called Paleoindian, persisted after 10,000 BP, while in much of the Hudson and Susquehanna valleys cultures using notched, Early Archaic points appeared about the same time. This has been stated succinctly by James Petersen (2004:xviii):

“Early Archaic remains are seemingly coeval with Late Paleoindian remains before 9000 B.P., occurring near the coast at Staten Island, in the lower Hudson, and in the New York portions of the Susquehanna and Allegany valleys…”

Petersen also indicated that while the Early Archaic appeared by 10,000 BP in the mentioned southern areas (as well as points south), in northern areas of the Northeast the Early Archaic emerged between 8000 and 9000 BP, replacing a longer-lingering, Late Paleoindian culture.

Arguably, the period from 9,000-10,000 years ago has the greatest lack of archaeological data of any period of New York State prehistory (the still more mysterious first half of the period once referred to as “The Missing 2,000 Years”; Funk 2004:130).

Considering the calibration of radiocarbon to calendar years, the period from 9000-10,000 radiocarbon years BP is actually a 1,400 year interval, from circa 10,085-11,485 calendar years BP. Thus, this period of the earliest Archaic is indeed a long time lacking important archaeological data. The gap in available information is especially felt in areas south of the somewhat better-documented occurrence of post-10,000 BP Late Paleoindian cultures in the St. Lawrence River-Lake Champlain-northern New England region.

Robert E. Funk (1991, 2004) focused on the possibility that the earliest Archaic in New York may be characterized by triangular, eared triangular, and weakly notched triangular points that resemble, and thus are easily confused with projectile point types of later periods.

Considering the likely early appearance of triangular projectile points in the Northeast, Funk (1991:60) discussed how closely Northeastern Late Archaic point types such as Brewerton Eared Triangle and Beekman Triangle resemble so called ”Transitional Paleo” points of the Southeast, implying that when found, some of the earliest Archaic projectile points may be mistaken for Late Archaic period points. Funk included the apparently early triangular points within a hypothetical phase or tradition he referred to as “Triangular Dalton”, equivalent to the Dalton horizon in the Southeast.

The Dalton horizon is considered to be late Paleoindian or Early Archaic by different investigators. Many assign a range of about 10,000-10,500 BP to the Dalton horizon, despite numerous radiocarbon dates that suggest it may be younger (Goodyear 1982). Alternatively, Funk (1991:59) has argued that a more accurate chronology may be 9000-9700 BP, based on well-reported data from Oklahoma and Illinois. More recent data from Dust Cave, Alabama suggest that a 10,000-10,500 BP age may pertain to Dalton occupation there. However, the occurrence of projectile point types considered “Middle Paleoindian” in the same soils at Dust cave as the Dalton points indicates that the Dalton points cannot be dated distinctly from possibly earlier occupations (Sherwood et al 2004). The issue remains unresolved, while the known Paleoindian chronology in the Northeast suggests that Funk’s view may be more accurate in this region.

A site in Saratoga County, New York has produced the kind of intriguing artifact assemblage that may be attributable to the earliest Archaic in the region. Indeed, I argue that it contains a very Early Archaic sub-assemblage representing Funk’s hypothetical Triangular Dalton phase. The site’s other sub-assemblage includes a fluted point preform reflecting an earlier Paleoindian occupation (although the specific Paleoindian cultural phase or sub-period is unknown). It is not certain that the fluted point preform is associated with a larger assemblage, but it was found in a location spatially differentiated from the apparent Early Archaic assemblage, in an area with somewhat different lithic attributes.

Base of fluted point in process.

I refer to this location simply as the Crooked Point site. Although the site was archaeologically excavated and then built upon several years ago, it would still be unacceptable (and illegal) for individuals to trespass into it or adjoining locations for some unauthorized searching or digging.

One of the differences between the lower and higher debitage density areas is found in the percentage of large chert flakes, which is much higher in the lower density area (44% of flakes larger than 1.5 cm compared to 22% in the high density area). This reflects working with larger pieces of chert in the lower density area, and is most likely associated with stone tool manufacturing, and/or the production of relatively large flakes for expedient cutting and scraping. Since relatively few of the large flakes in either area were use as expedient tools (about 3-4%), it is most likely that the large flakes were produced as by-products of forming stone tools from cores and bifaces brought to the site.

The lower percentage of large chert flakes (and conversely, the higher percentage of small chert flakes) in the higher density area reflects less tool manufacture and more tool sharpening and repair (This is because more refined work yields smaller pieces of stone waste). Thus, the spatial division between lower and higher artifact density is correlated with different kinds work. Whether or not this reflects different stages of work performed in different places during one period of occupation, or multiple occupations at different periods by different kinds of work parties cannot be determined due to the sparse evidence of an early period of occupation.

Nonetheless, the close spatial association between the numerous tools found within the area of artifact concentration seems to indicate one period of occupation in this small part of the site. This is the assemblage that I feel represents a very Early Archaic occupation. It contains the following formally manufactured artifact types:

The end-thinning of the asymmetrical triangular point might also be thought of as mini-fluting, hearkening to Paleoindian and Dalton technology. The eared, weakly side-notched triangular point provokes further consideration of Funk’s statement of expectations concerning the earliest, Dalton-equivalent Archaic in upstate New York. Traces of serration, often considered diagnostic of Dalton and other Early Archaic technology, remains on the side-notched point’s blade. 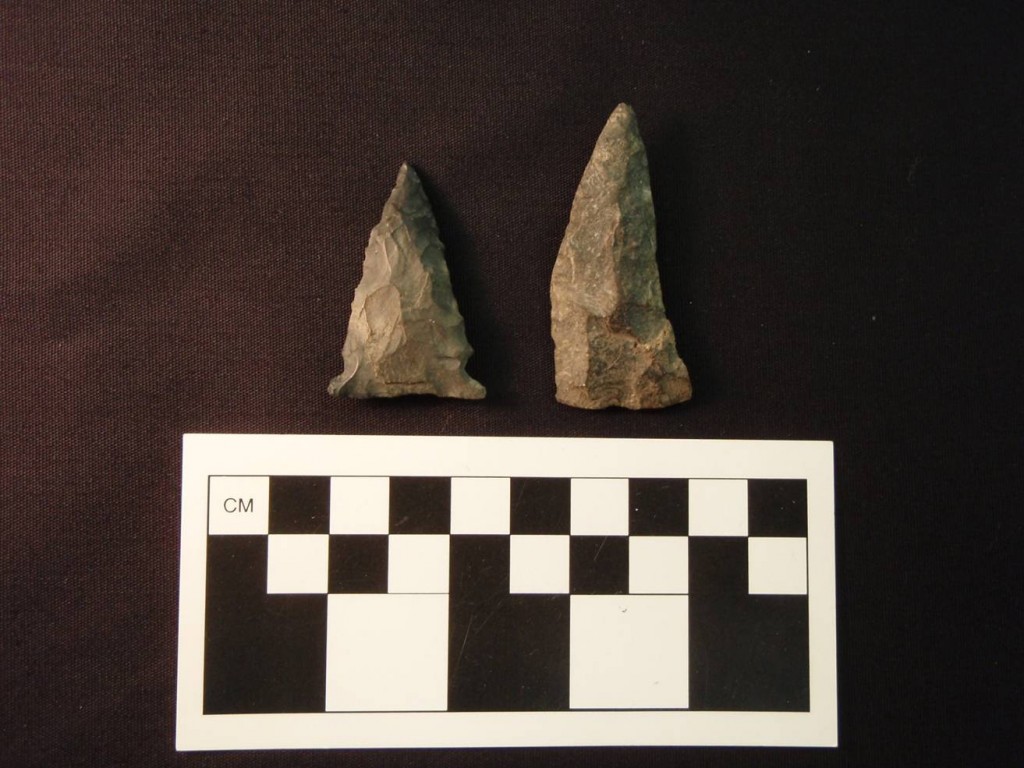 The assemblage is particularly interesting for the diversity of the stone assemblage, indicating that a range of activities was performed at the site, including weapon repair and probably hide working, among others. Hunting forays in the area likely were based at this site. The large number of gravers is very interesting, as it appears to indicate that engraving was an intensely pursued activity at this site. The long, narrow tools shaped like perforators resemble artifacts referred to as drills associated with the earliest Archaic assemblage at the Shawnee-Minisink site in Pennsylvania (McNett 1985:95; also see the illustrated “Early Early” Archaic graver in McNett’s same photo). 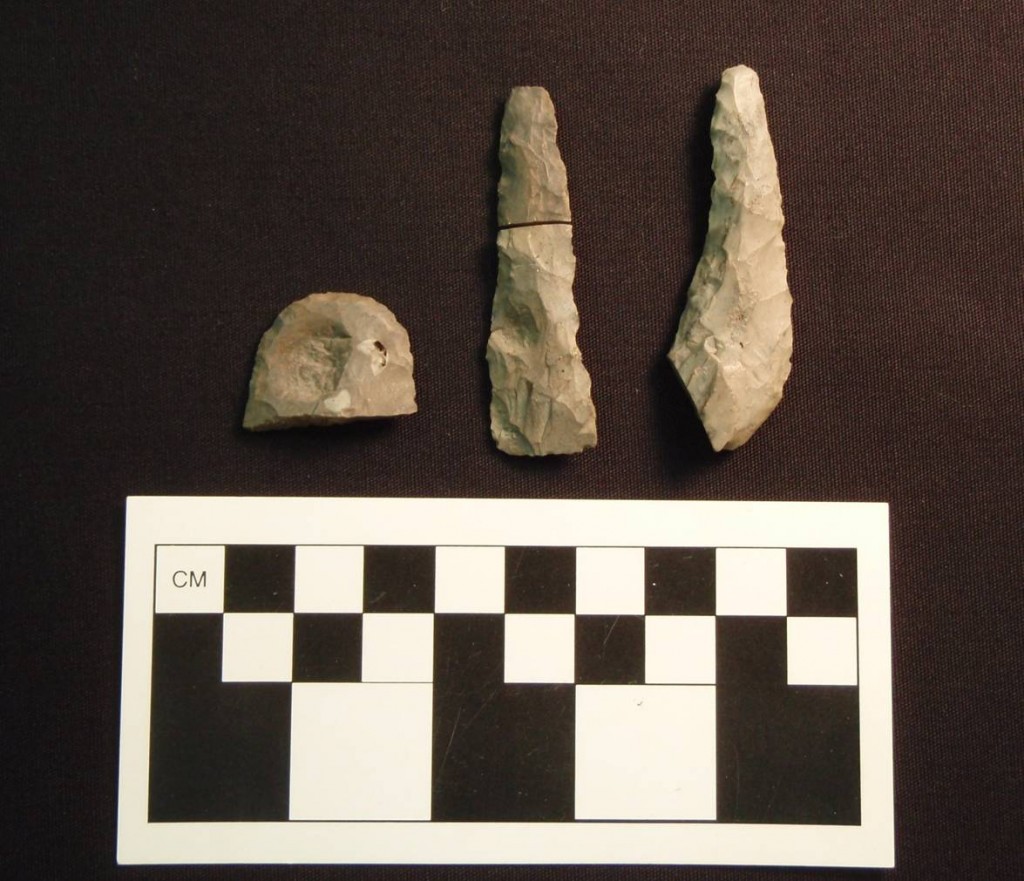 How typical is this site of the earliest Archaic? To answer this question, additional information is needed to confirm the age estimate between 9,000 and 10,000 radiocarbon years BP. At this time, the site’s age is an educated guess. Confirmation of age may eventually come in the form of other, similar artifact assemblages or projectile point types that can be radiocarbon-dated reliably at other sites. Should the age estimate for this assemblage prove accurate, the availability of information from other sites will help to understand activity variation among the sites of this period.

The accompanying photos illustrate the fluted point preform and provide a sample of the inferred very early Archaic artifact assemblage. 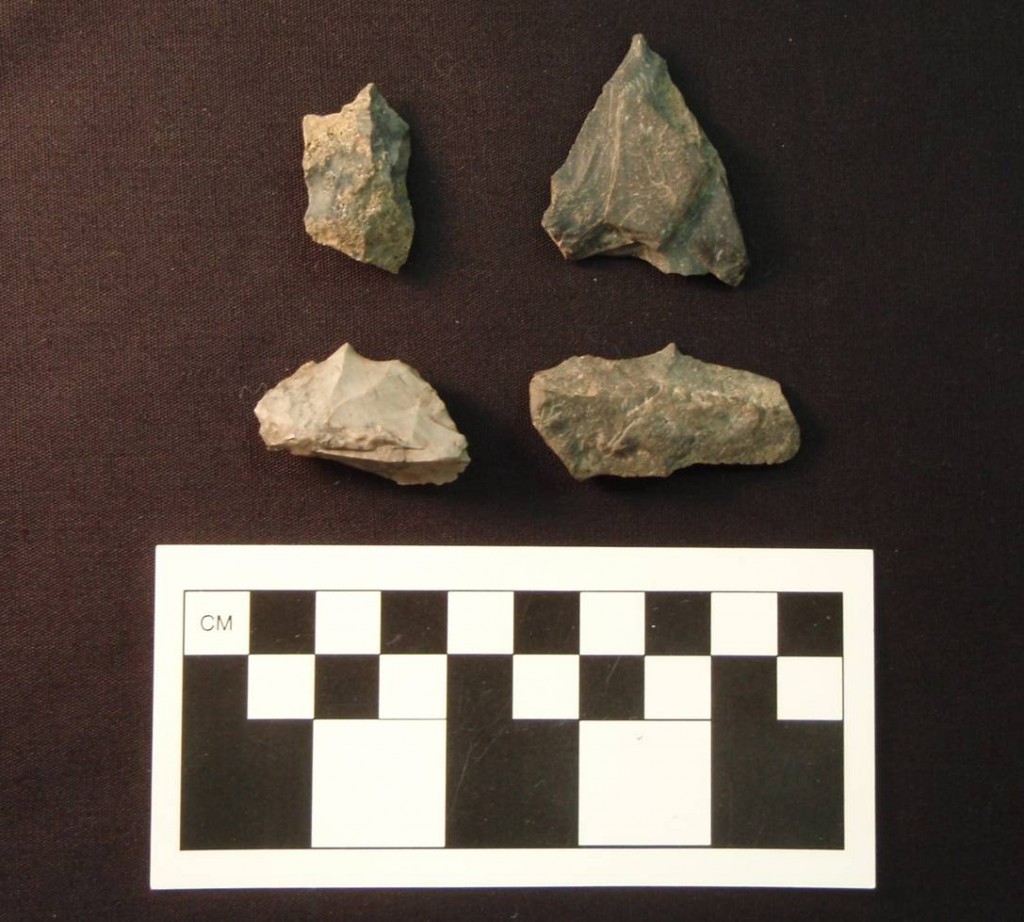 A sample of gravers

Funk, Robert E.
1991 Late Pleistocene and Early Holocene Human Adaptations in the Lower Hudson Valley. In The Archaeology and Ethnohistory of the Lower Hudson Valley and Neighboring Regions: Essays in Honor of Louis A. Brennan, edited by Herbert C. Kraft, pp. 49-67. Occasional Publications in Northeastern Anthropology, No. 11, Bethlehem, Connecticut.

Buffer
If you enjoyed this post, please consider leaving a comment or subscribing to the RSS feed to have future articles delivered to your feed reader.
... other posts by Edward V. Curtin