Sea level has been rising since the glaciers of the last ice age began to melt about 18,000 years ago. In a December 2012 National Geographic article, Laura Spinney brought us a story on evidence of sea level change in the North Sea and adjacent estuaries and shores. In this article, we learn the tale of Doggerland, a vast area now below the ocean between the British Isles, Scandinavia, the Low Countries and France. Less expansive (but still substantial) submerged coastal plains fringe France south of Brittany and northern Spain. Britain and Ireland were not islands then— they were the northwestern European mainland. Doggerland takes its name from Dogger Bank, a sand bank (sometimes a ship hazard) located in the North Sea between Denmark and the north of England.

Modern day mapping and spatial imaging technology allows an increasing ability to depict the ocean floor. The article provides illustrations of how Doggerland shrank in the face of sea-level rise from 18,000 years ago to the present, with 7000 BC and 8000 BC Mesolithic period shores noted in particular. Sea level has never stopped rising, but it slowed as the ice sheets disappeared and much of the low-lying land was submerged.

The archaeological evidence Spinney discusses is fascinating: it includes notched bone projectile points, the bones of extinct animals, a human jawbone dredged from the bottom of the sea, and human and animal footprints pressed into the mud 7,500 years ago on a floodplain that is now submerged (except at low tide) in the Severn estuary. In addition, located on the cliffs above the North Sea in Northumberland, archaeologists have found early evidence of a settled way of life, a suggestion that with crowding caused by sea level rise, hunter-gatherer mobility had become limited, and territoriality was becoming important.  Spinney (2012:243) concludes: “Migration, territoriality, conflict: stressful ways of adapting to new circumstances, but adaptations nonetheless.” 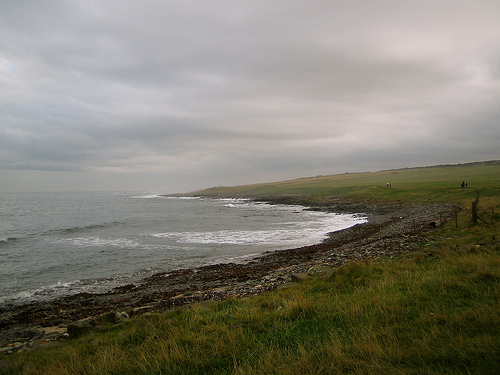 Doggerland no doubt had large hunter-gatherer-fisher populations that were forced inland over thousands of years, sometimes slowly, but perhaps in mass movements during catastrophic events. One of these catastrophes was an undersea landslide called the Storegga slide, which triggered a North European tsunami. Another was the collapse of the Laurentide ice sheet in North America, which released an immense pulse of meltwater into the North Atlantic. Both of these events occurred about 8,200 years ago.

Sea-level rise is global in scope. While Doggerland was disappearing beneath the North Sea, eastern North American coastal plains also were going below the water. Here archaeologist Michael Faught (2004) has conducted surveys for submerged Paleoindian and Archaic period sites in the Gulf of Mexico, southwest of the mouth of the Aucilla River (along the submerged PaleoAucilla River system). Faught has found evidence of Late Paleoindian, Early Archaic, and Middle Archaic occupation. In the study area, radiocarbon dating of charcoal and wood from different kinds of submerged contexts span the range from approximately 5,900-7,200 years ago, and indicate the progression from various terrestrial and freshwater conditions about 6,700 to 7,200 years ago, to brackish conditions (indicating a developing estuary) about 6,100 to 6,300 years ago, to human activity in a near coastal setting about 5,900-6,000 years ago. The last date is from a now-submerged shell midden.

The importance of this work (at least initially) is to document that the submerged coastal plain and coastal river systems were part of significant human landscapes before inundation. At the same time, we need to consider what happened to people living in coastal locations (as they adapted gradually or more drastically). Sometimes sea-level rise accelerated, but it was persistent over the long run, and human response may have been in flux before restabilizing. Faught (2004:277) speaks of a pulse of meltwater flow after 10,000 BP (the end of the very cold Younger Dryas period), as an event “forcing additional reductions of paleolandscape and readjustments of human settlements and foraging ranges. This took place over the next 5,000 to 6,000 radiocarbon years.”

Elsewhere, evaluating evidence of submerged Archaic period archaeological sites in the New York-New Jersey area, Daria Merwin similarly emphasizes that in order to understand this period fully, we need to know more about the submerged archaeological record. Merwin (2010) has studied an assemblage of artifacts called the Corcione collection that derives from sand dredging operations off the New Jersey coast. Merwin also conducted an underwater survey in this area.

The Corcione collection is particularly interesting since it contains a variety of artifacts including Early, Middle, and Late Archaic period projectile points. I had this kind of evidence in mind recently when I mentioned that rising sea-level may have caused a chain reaction among inland populations during the ameliorating post-glacial environment, especially during the Middle Archaic period (6,000-8,000 years ago).

Merwin (2010) has also studied a submerged section of the Hudson River floodplain near Croton Point in Westchester County, New York. The Hudson River crossed the broad Atlantic coastal plain during the Ice Age (before sea-level rise began), and the New Jersey investigations were made in consideration of this old channel. Sea-level rise over millennia has not only submerged the PaleoHudson channel, it has turned much of the rest of the Hudson into an estuary. The estuary has migrated upstream progressively over time, covering the Hudson’s old shoreline and floodplain near Croton probably no later than 2,500 years ago. Soil cores at Iona Island several kilometers north of Croton Point show a change from dry land to wetland approximately 4630-2500 years before present (BP).

Croton Point is the locale of several Archaic period oyster shell middens. Merwin has documented that stone artifacts extend across the submerged paleo-landscape adjoining this area, adding to the diversity of the local archaeological record, and suggesting a possible relationship between the shell middens and other kinds of sites nearby.

One of the recovered artifacts from the underwater survey is classified as a Steubenville type point dating to about 3400-4200 BP. The effects of rising sea level on human settlements and foraging were felt long into the Archaic.

Evidence of human settlement is relatively abundant on now-submerged eastern North American coastal plains. This requires archaeologists to consider more often that in North America, as well as in Europe, sea-level rise probably caused significant inland migration, and that related “readjustments of human settlements and foraging ranges” had implications for inland populations as well.