Earlier this week National Public Radio’s “All Things Considered” had a story on the threat of on-going and accelerating sea-level rise to the archaeological site of the early 17th century English settlement at Jamestown, Virginia. The big question addressed pro and con in the story is whether archaeologists should fully (or at least more fully) excavate the site so that the information is recovered before the site is submerged; or whether excavation should be curtailed so that the remaining site is preserved for study in the future, even though it will be submerged.

An interesting back-story is that it was once thought that the earliest settlement— called James Fort— had been washed into the James River by erosion. A concerted effort was made to find evidence of the fort in 1955, including a survey conducted in the river as well as on land. No evidence of the fort was found. The method of surveying in the river involved retrieving clam-shell excavator bucket-loads of river-bottom, bringing them to land, and hosing the mud away with water to try to identify artifacts. Screening, it was noted, was “impractical”. A variety of artifacts ranging in age from the 17th to the 20th century was found. The attempt was made to take bucket-loads at 50 foot intervals 3 or 4 transects away from the river bank, but the inability to control the barge on which the clam-shell digger was mounted missed this standard, reducing it to approximate but “uniform” coverage. Regarding the fort, the project archaeologist, Dr. Joel Shiner concluded that it was probably nearby, but “In all probability it stood on ground that has been washed into the James River” (Cotter 1958:17). A tidewater river, the James is subject to both sea-level rise and upstream flooding, hence the issue with erosion, which was illustrated in National Park Service archaeologist John Cotter’s report (1958:13). 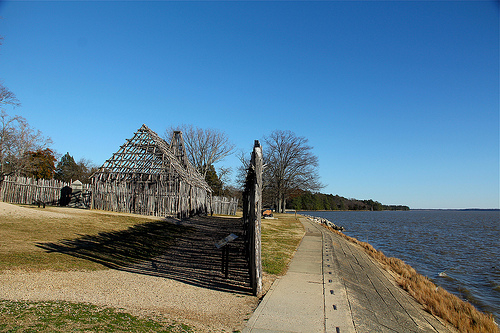 Much later, beginning about 1994, Virginia archaeologist William Kelso rediscovered James Fort. It had lost some ground to erosion along the river bank, but was largely an intact archaeological site. Learning about the early colony has proceeded through excavation and analysis since that time. Much of this was chronicled in a book completed in time for Jamestown’s quadri-centennial observance (Kelso 2007).

Some of the issues to consider today emerge in this brief account. Surely the methods of underwater archaeological investigation are better today than in the 1955 reign of the clam-shell digger. And, mostly left alone, the site of James Fort was there 39 years later for careful, well-informed terrestrial excavation to uncover. Still, it is clear that rising, and especially, turbulent river water is destructive, and the archaeological context of what remains of Jamestown would be lost or significantly reduced if the site suffered the double adverse effect of sea-level rise and associated, enhanced river-bank erosion.

Also in favor of the argument for more excavation now, archaeological methods, techniques, and theories have already advanced a tremendous amount since the 1970s, when I first began to hear stated the position that archaeological resources should be left in place until better methods, techniques, and theories are developed in the future. Archaeology has moved, often rapidly, in the anticipated direction of great effectiveness, often through technical advances in other sciences.

A preemptive excavation program necessarily will assume the continued, very long-term preservation of the artifacts and records of the excavation in secure museum collections and archives. Optimistically, we can hope that this assumption is accurate on the scale of geological time, for the trade-off of now or later is of that scope.

So what do you think? Should the archaeological site of Jamestown be excavated increasingly in mitigation of anticipated sea-level rise, or should the site be left in place for future discovery, when scientists and historians find reason to learn about Jamestown through underwater archaeology? Or is it imaginable that archaeologists will be around when sea-level falls again in a far-distant time, exposing the (greatly jumbled) traces of 17th century English colonial civilization?