When the Summer Gets Hot, Coolly Crack Open a Book: Book Notes, Summer 2014

We all lead busy lives, and although often it is hard to find time to read, summer beckons as one of the best times to open a book you haven’t looked at before.  This time of year can be busy for archaeologists and many others, but why not take a break with a book?  Summer nights with the TV turned low, the much rumored quiet weekend, long weekends, or a summer vacation (that rarest of experiences for many archaeologists) provide the opportunities.  Lately I have looked at an eclectic selection of books that should appeal to many tastes.  These include: 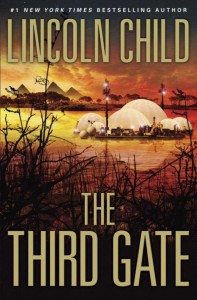 The Third Gate by Lincoln Child (fiction, paperback, Anchor Books, 2012).  Many readers are familiar with Lincoln Child, perhaps most famously as half of the Douglas Preston-Lincoln Child team that has produced so many great adventure novels blending (highly variable measures of) science, science fiction, and detective stories, often in a museum context, sometimes in archaeological fieldwork (as in Thunderhead), or legitimized treasure hunting (i.e., there is a permit and an archaeologist with legitimate research involved, such as in Preston and Child’s Riptide).  In The Third Gate, Child takes us to the Sudd, that murky, watery world of the Nile south of Egypt, where an archaeological expedition is looking for a pharaoh’s tomb that has been submerged over time by the growing, meandering, deepening swamp. The Sudd is a region where the Nile turns in on itself, collecting all the silt and river detritus flowing out of east Africa and forms a shifting morass of improbable dimensions.  Archaeologists (and everyone else), suspend your disbelief as you read about the highest-tech, spare-no-cost, most-expensive-beyond-belief archaeological expedition ever, and the diverse team assembled to find the tomb…and, uh, well, deal with the pharoah’s curse.  The archaeological survey aspect of this story is credible for archaeologists:  at least the approach is plausible, although the backing for it is at a fantastic scale.  Regarding the curse, it is at this point one appreciates the side of the expedition researching near-death experiences and enigmalogy.  Yes that’s right, enigmalogy.  Rolls right off the tongue.  It’s a field where a medieval history professor can regularly encounter mysterious forces and unexplained manifestations.  This book is a page-turner, a fun read, and it is sure to please fans of Child, Preston and Child, or thrill-seeking readers that haven’t yet discovered these authors.

‘A faint smell of dust and decay rose from the mummy, but Tina did not notice it.  She bent in closer, filming, heart beating fast…“Narmer,” Stone whispered.’ (The Third Gate, 278). 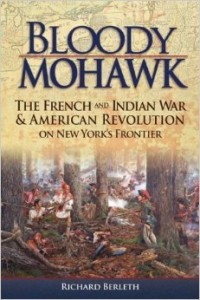 The Mohawk River flows out of the southern Adirondacks carving a course south and then east, merging its stream with others that join it on its journey.  Several have names from the Mohawk Indian language:  West Canada Creek, Canajoharie Creek, Cayadutta Creek, Schoharie Creek.  In a metaphor, the Mohawk also flows through history, an Indian river of the Mohawks and Oneidas flowing out of a prehistoric past, merging with the historical waters of multiple Old World streams, notably the Dutch who settled New Netherland in the 17th century; the Palatine Germans who came as indentured servants to the newly English domain of New York in the early 18th century; the Irish land baron, trader, and Indian agent William Johnson who built his own somewhat-bizarre world of Indians and retainers beyond the regular view of the Crown and its governors; Scotch-Irish, who, crowded-out of the good land, settled in the hills; and after mid-century, New Englanders looking for farms or converts to Protestant religion (i.e. after New England perceived the Mohawk region as a safe place to be with the fall of New France in 1763).  The Mohawk valley was a multi-cultural place learning to negotiate and in some ways appreciate differences throughout the 18th century.

The first five chapters of Bloody Mohawk relate how this world developed, largely through the stories of three individuals:  frontier lord Sir William Johnson, the Palatine German culture-broker Conrad Weiser, Jr., and the New England missionary Samuel Kirkland.  In this telling, Johnson is the central figure (just as he was politically central to all life in the Mohawk valley).  The stories of Weiser and Kirkland are often told in relation to Johnson and the uneasy tension that frequently emerged among these important agents of change in colonial America.  This often positions our view as readers looking outward from the Mohawk valley to the place where Weiser eventually lived in southern Pennsylvania, interpreting for mutual benefit the policies and events that entangled whites and Indians from there to New York; and to the places where Kirkland lived and preached, first among the Seneca at Kanadesaga Castle (now Geneva, New York), and later in the political center of Oneida country (near modern-day Rome, New York).  Centering Johnson and positioning Weiser and Kirkland in his sphere introduces the broader geographic scale needed to understand the Mohawk valley as a warpath and war target during the American Revolution.  It also lets us see the historical basis for the growing split between the Oneidas (allies of both Weiser and Kirkland) and the Mohawks, Onondagas, Cayugas, and Senecas (who were under Johnson’s sway).

The rest of the book is concerned with the American Revolution in the Mohawk valley, depicted sometimes as the crossroads of violent forces, sometimes as the major arena of hostilities.  The war drove Johnson’s heirs and close Mohawk allies to England and then to Canada; brought the war-parties of the Mohawk leader Joseph Brant, Sir William’s son John, his nephew Guy Johnson, and others (including regular British army units) out of Oswego and Fort Niagara and down upon the rebel Mohawk valley communities; and launched American counter-offensives from the Pennsylvania and New York frontiers up and down the Susquehanna River and into the Indian stronghold of the Finger Lakes region.  Some of the points made in these chapters that I found particularly interesting include:

It would be interesting if Bloody Mohawk author Richard Berleth picked up his story again, focusing next on the issue of the future of the Indians, moving his analysis forward and westward for at least for a generation or two beyond the Revolution.

“She named the names of trees, flowers, sycamore, tulip.
He asked her who did she think she was, Gary Snyder?”
From the poem “Fling” by James Cummins (1997) 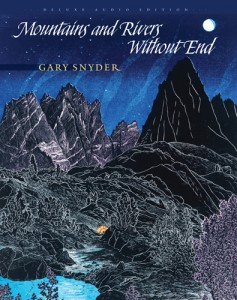 Mountains and Rivers Without End by Gary Snyder (poetry, hardcover/deluxe audio edition, 2013).  The subject and historic context of this book is mentioned briefly on the inside jacket of this hardcover edition:  “Gary Snyder’s epic of geology, prehistory, and mythology was begun in 1956, and not completed until forty years later.”  This statement leaves out that Snyder brings to this work the natural imagery of the western American forests, mountains, and rivers; the basic human connections and sensitivities experienced by a seasonal worker on the road; and Zen mindfulness honed in a life lived in part among Japanese Buddhists.  But geology, prehistory, and mythology are indeed subjects that draw the attention of readers of Fieldnotes, and recommend Snyder’s magnum opus to this review.

Published in 1996, this book was lavishly re-released in 2013 in a deluxe audio edition that is beautifully illustrated and contains 3 cds of the author reading the work.  It also contains Gary Snyder’s notes on the work and an essay on its composition.  Recently, Gary Snyder has been brought to the attention of anthropologists and archaeologists as an anthropology major (at Reed College 1947-1951) who achieved great success, making a counter-argument to those who say “don’t major in anthropology.”  Earlier, Snyder’s poetic connection to the natural environment resonated with many in the 1960s and 1970s, bringing touchstone images to the fledgling environmental movement of that period.  Mountains and Rivers Without End is the long composition of a great poet, a Leaves of Grass for our time.  It is a book you could read in fascination all night.

This is a sample (for archaeologists particularly) from Snyder’s short poem “Old Bones”, encountered early in Mountains and Rivers Without End.  Here, a person (gender not mentioned) from an ancient era of hunting and gathering, moving across the landscape in a quest for food that is at once more meaningful than a struggle for subsistence, speaks of life and transcendence:

Out there somewhere
a shrine for the old ones,
the dust of the old bones,
old songs and tales.

What we ate—who ate what—
how we all prevailed.

Imagine for a moment that you are in an old and still wild part of America.

Then think of this snippet from “The Hump-Backed Flute Player” found deep in the book:

It was whispered to me
by the oldest of trees

And all night long sung on
by a young throng

Enjoy the summer.  We are happy to hear about your recommendations of books for the archaeologically-minded.