Recently Kerry Nelson and I attended a Saratoga Reads discussion of Twelve Years a Slave by Solomon Northup, along with several other avid Saratoga readers (and people who care about local history).  This was a regularly scheduled Saratoga Reads event, but very timely, this being African-American History Month. Northup was a free man of African ancestry living in Saratoga Springs in 1841, when he was lured away from Saratoga by a promise of work as a musician in a circus, and then sold into slavery in the notorious Washington, D.C. slave market. After his return to freedom in 1853 his book was widely read, and seen as an important eyewitness testimony to the inhumanity of slavery.

One of the subjects that came up in the discussion was the controversy over the Fugitive Slave Act of 1850, which required the return of escaped slaves from non-slave states such as New York (and allowed the prosecution of people harboring slaves).

I was reminded then of an event in the enforcement of this law— and the resistance to it— that I learned of several years ago during an archaeological survey of Clinton Square in Syracuse. Clinton Square— located in the heart of 19th century Syracuse, and vitalized in olden times by that essential artery, the Erie Canal— has a modern monument in brick and bronze to what is referred to as The Jerry Rescue.  Jerry, also named William Henry, was working in Syracuse on October 1, 1851 when federal agents (and the local police) seized him and tried to arraign him as an escaped slave (which apparently he was).

However, the tale doesn’t end here, and in addition, there is a significant back-story to this attempt at fugitive slave capture. There is a sense in which Jerry was an unfortunate pawn in the politics of the time. In May of 1851, Secretary of State Daniel Webster had proclaimed to an audience in Syracuse that the law would be upheld despite the efforts of the abolitionists— even if it had to be enforced during a scheduled congress of abolitionists in Syracuse in October. 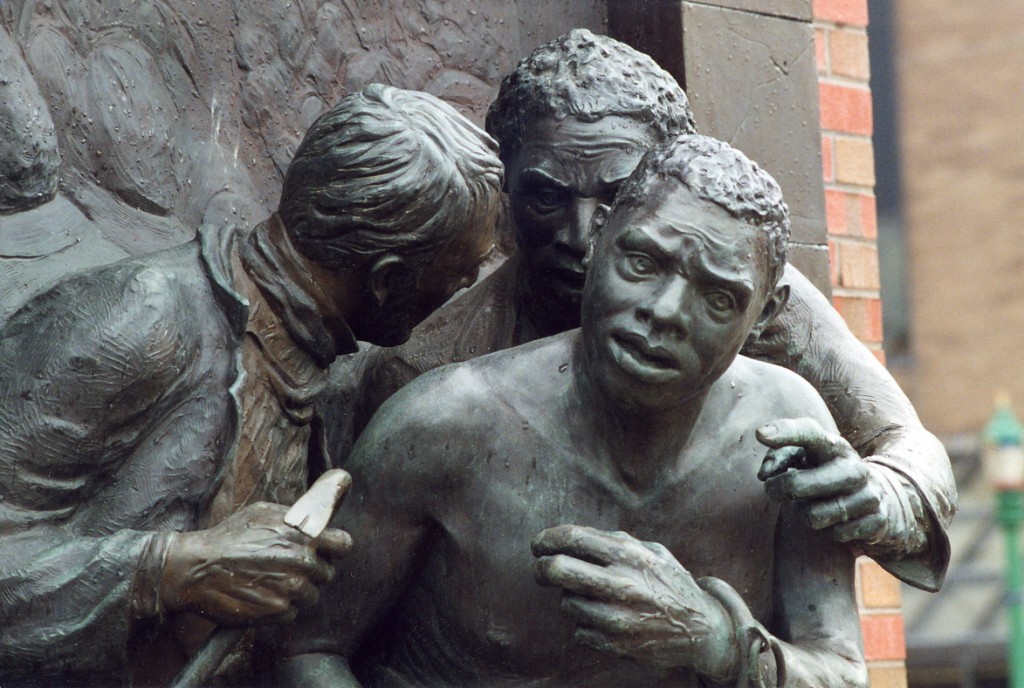 So when Jerry was seized on October 1 under the very noses of the abolitionists meeting in Syracuse, the outrage of this particular (however legal) kidnapping was met with instant, and undoubtedly calculated resistance. The drama quickly played out in the square and at the nearby police station. The federal action was an obvious follow-up to Webster’s speech, and a demonstration of federal power in the face of the radical anti-slavery movement. The abolitionists’ resistance to Jerry’s capture was immediate, even anticipated by those who were ready to ring church bells to alert them.

The bells rang. A large crowd gathered. The abolitionists tried to rescue Jerry at arraignment, and he actually broke free, making it to the street (still manacled) before being captured again. His arraignment was rescheduled and moved to a larger room at the police station, but the crowd did not disperse, despite a warning shot fired by the police. They battered down the door and the police surrendered Jerry, who was hidden in Syracuse, then spirited away to Oswego on Lake Ontario— and from there to freedom in Canada.

A proclamation made by abolitionist leader Gerrit Smith the day after the rescue noted that “2,500 brave men” rose up for Jerry during the rescue. It also praises Syracuse while describing Daniel Webster in most unsavory terms. 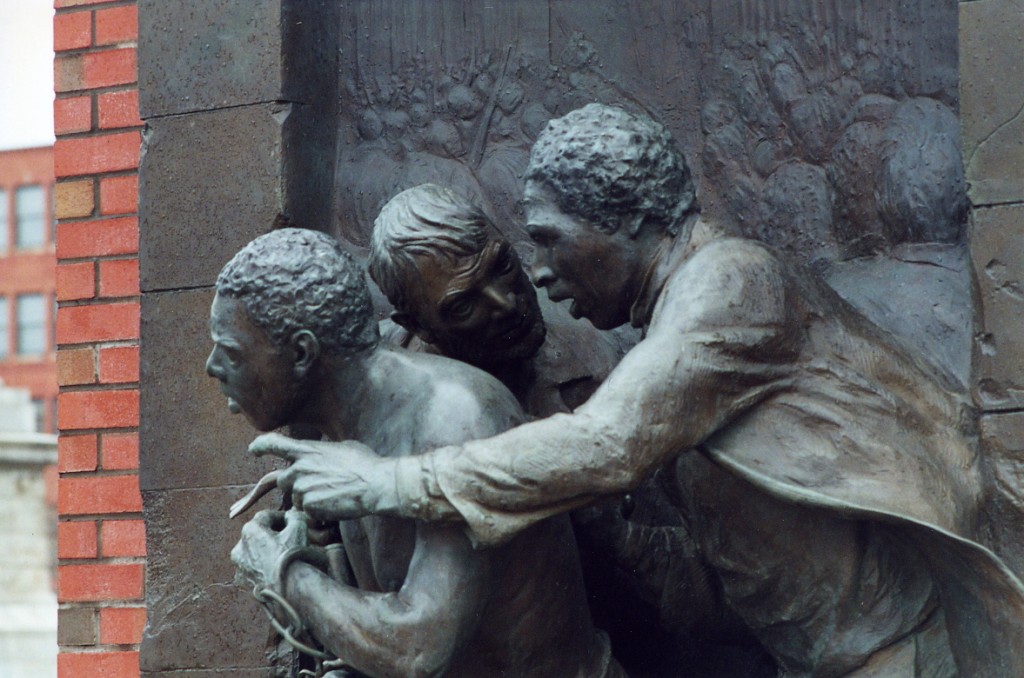 The photos seen here are from the Jerry Rescue Monument in Clinton Square. The monument’s bronze statues were sculpted by Sharon BuMann. They show Jerry, panicked, perhaps in pain, fleeing with the aid of white abolitionist Reverend Samuel J. May, and Bishop Jermain Loguen, an Underground Railroad leader who was once enslaved himself. Later, Loguen and others were arrested for their roles in Jerry’s rescue; May was not. Bail was posted by Senator William Seward of Auburn, New York; almost no one was convicted. However, Smith got the arresting Marshall Allen indicted for kidnapping, taking the opportunity through his argument in this case to figuratively indict the fugitive slave law. In the end Marshall Allen, legally within his authority, was acquitted.