Vikings in the New World: A New Phase of Investigation

It seems to me that there are several phases in the reporting and investigation of Viking sojourns in North America. The first phase (in the 19th and early 20th centuries) focused on interpreting the Icelandic sagas involving Leif Ericson and others. These accounts led to speculation concerning where along the east coast Leif or his successors landed or stayed. The sagas and other medieval references (such as to the 14th century expedition of Paul Knutson) also became linked with possible physical evidence, such as the Newport Tower in Rhode Island, the reports of medieval weapons found in Ontario, and Minnesota’s Kensington Stone (for example see Holand 1940). As the History Channel sometimes reports, the authenticity of the Kensington Stone is still under investigation. Meanwhile, I try not to make the mistake I made a few years ago, when I referred to the Kensington Stone as a hoax in front of a colleague from Minnesota. I would now venture into this territory with due caution and sensitivity.

Interest in Viking voyagers has even touched New York State, with various claims of Viking evidence from the vicinity of Lake Ontario (reachable, with determination, by longboat) to Lake Chautauqua (which would have required some pretty extreme portages). As Mason Winfield (1997) reports, some of these western New York claims were investigated by the science fiction writer Frederick Pohl in the 1960s, who reportedly seemed unimpressed. With respect to eastern New York, some interpretations of the sagas place “Hop” near the mouth of the Hudson River (Hop was site where a Viking colony spent a mild winter early in the 11th century). The possibility of the New York City area as the location of Hop is only one of several viable candidates mentioned by Sigurdson (2000).

Professional archaeologists have generally been skeptical of the reported physical evidence (hence the 21st century investigation of the Kensington rune stone’s authenticity, despite the stone’s first revelation to investigators in 1898). However, awareness of North American Vikings entered a second phase in 1961 when Helge and Anne Stine Ingstad began documenting an 11th century Viking settlement at L’Anse aux Meadows, Newfoundland. Additional work done later by Parks Canada has provided a wealth of information on this complex of houses and medieval iron-working. Too far north to be Vinland, the discovery at L’Anse aux Meadows of butternuts, apparently brought back from a voyage south yet hints at a Vinland connection (Vinland being a place warm enough— perhaps southwest along the St. Lawrence River— for butternuts as well as grapes to grow). 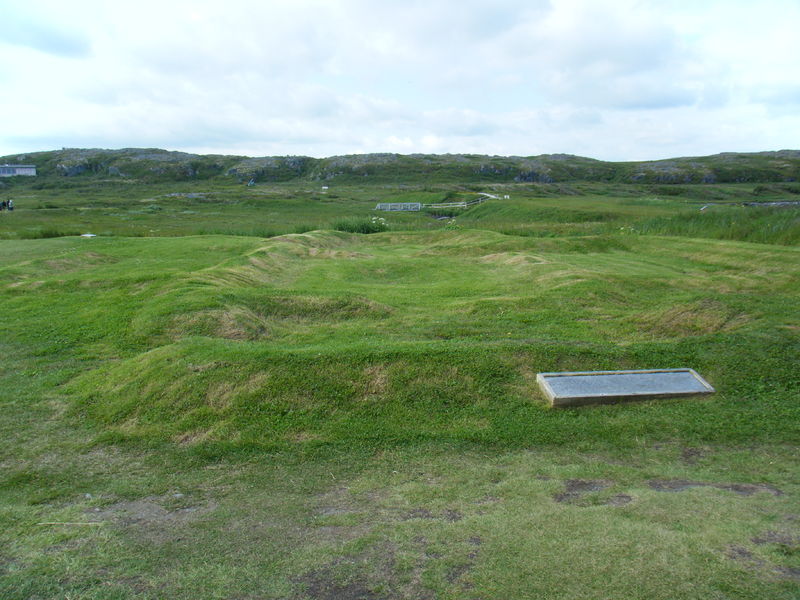 Subsequently, a third phase of investigation involves the recovery of artifacts in a variety of situations, all of which seem to indicate contact between Vikings and native North Americans. These finds include Viking artifacts found in an ancient Eskimo site at Skraeling Island in the Canadian Arctic (opposite Greenland); an Indian projectile point made of Labrador’s Ramah chert found in a Viking grave in Greenland; and artwork made by Dorset (pre-Eskimo) hands, but appearing to represent European faces or clothing.

Among the medieval artifact finds are Viking chain mail from Skraeling Island and an 11th century Norse coin found at the American Indian Goddard archaeological site in Maine. The Goddard site has a lot of evidence of trade north and south, so it seems more likely that the coin moved south from a place such as Newfoundland or Labrador through a native trade network— passing through at least several hands— than by way of a Norse visitor to 11th century Maine.

Various discoveries and claims made in all three research phases just reviewed are covered in a great book on Vikings edited by William Fitzhugh and Elisabeth Ward (2000), where a number of experts (who I have followed here) discuss these subjects. Take note that this book provides a basis to debunk some of the 19th and early 20th century claims.

At the present moment, a new phase of research on Vikings in North America is opening. In an article by Heather Pringle, the November 2012 issue of National Geographic reports on the Baffin Island investigations of Patricia Sutherland (also an author in the Fitzhugh and Ward publication). This research focuses on apparent trade relationships between Vikings and the Dorset, people who occupied Labrador and Baffin Island near the end of the 14th century, as the Vikings sailed the waters near these shores in the far, far north. 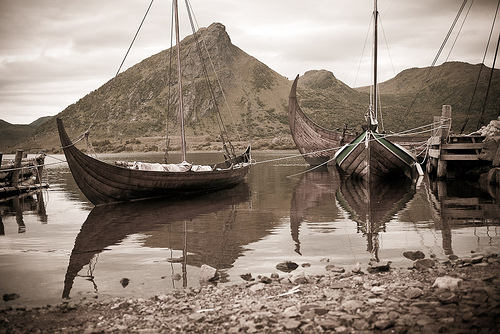 Sutherland’s strategy includes investigating old evidence in museum collections, as well as making new excavations at sites showing a Norse presence due to the occurrence of certain types of artifacts. These bits of evidence are subtle, including such things as notched sticks, drilled whale bone, and cordage made of hairs obtained from the pelt of the arctic hare. Some of the evidence she uses was misunderstood or overlooked by earlier researchers. There is also interesting evidence of a large stone-and-turf house, but definitely not the very obvious sorts of things that grabbed attention in earlier Viking site or Viking-contact claims: such as swords, battle axes, and rune stones at some of the disputed sites; the chain mail or coin from Native American sites showing confirmed contact with the Norse; or a spindle whorl and smelted bog iron, illustrating Viking industry at L’Anse au Meadows.

Yet like good detective work, it seems in this case that subtle clues and deductive reasoning are telling the story, and implicating Viking voyagers sailing to Dorset communities from homes in places such as Greenland or Iceland. Some of the stories told by the evidence? The Dorset didn’t have drills— Viking contact seems like the most logical source of drilled whalebone. Wood was scarce on the tundra near Dorset homes, but the Vikings may have kept notched sticks as a method of tallying trade transactions. Possible tally sticks are among the artifacts from Dorset sites. And the arctic hare cordage? The cordage was made with spun yarn. Spinning was not a Dorset practice: they twined sinew and stitched together clothing. But spinning was a Viking practice. The yarn Sutherland first found in a museum collection from a 700 year old Baffin Island site was similar to the yarn made about the same time in Greenland by Norse women.

This line of evidence— the material record of Norse traditional practices, even when applied to local products— reflects a powerful, previously under-utilized method of documenting the Norse presence in North America. Now Sutherland has been excavating in the large sod and stone house ruin discovered but found difficult to understand by archaeologist Moreau “Max” Maxwell in the 1960s. The scale of this building is uncharacteristic of the Dorset (who lived in small houses). Will this be widely accepted as a second North American Viking habitation? Persuasive evidence is mounting.