…and Back Again: A Viking Family Returns from Vinland

While looking into the subject of Vikings in the New World, I came across a magazine article on an often untold part of the Vinland story, comprising an afterword about what happened next.

The Vikings of the Vinland sagas are said to have stayed at most about three years and then returned home. Eleventh century life went on, with a seeming lack of ambition for sustained colonization west of Greenland.

Leif Ericson returned to Greenland, where his father Eric the Red lived, settled down, and within a couple of years met a sea-faring merchant from Iceland named Thorfinn Karlsefni. Karlsefni soon married Eric’s widowed daughter-in-law Gudrid and they raised a new expedition to Vinland. Exploring the North American coast, they overwintered at Hop, a place-name referring to a tidal pool (Some saga interpreters indicate Hop may have been in or near modern-day New York City, although New England and Canadian locations are also considered).

During this visit, Thorfinn’s and Gudrid’s son Snorri was born, becoming the first recorded person of European descent born in North America (and possibly the first in the future State of New York). Eventually, conflict with Native Americans convinced Thorfinn and Gudrid to make a safer life in an established Viking homeland (safer, that is, if you don’t count the potential for Viking blood feuds).

This is the story told (in much more detail, and in differing versions) by the 13th century sources on the Vinland expeditions, Eric the Red’s Saga and The Greenlanders’ Saga. So let’s follow it forward from where it usually ends. The article I recently found adding to this tale is by Eugene Linden, published in Smithsonian in December, 2004. It tells of Karlsefni’s return to settle in Iceland after the Vinland voyage.

Linden’s article was prompted by the discovery made in the early 2000s by American archaeologist John Steinberg on the grounds of the Glaumbaer Folk Museum in northern Iceland (Steinberg 2003). Using electrical conductivity to identify soil anomalies, and then assigning student assistants to dig at the locations of the anomalies, Steinberg found evidence of a large Viking long-house some 100 feet long and 25.5 feet wide. With walls built of turf, the size of the house indicated that it belonged to an important person. Moreover, the straight cut of the house walls resembled the houses of the L’Anse aux Meadows archaeological site in Newfoundland more than typical Icelandic, bowed-wall structures built about the same time. The age of the structure was the 11th century, as indicated by the layering of ash from volcanic eruptions of known age. 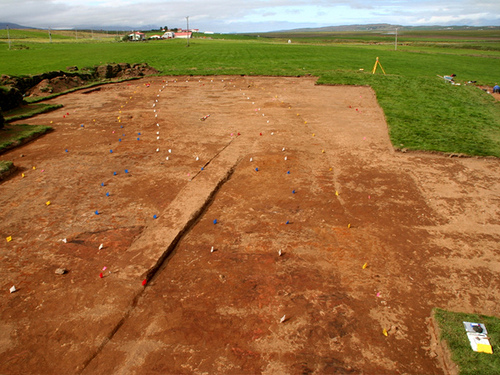 Was Steinberg’s discovery Karlsefni’s house? There is nothing specific to say one way or the other, but according to Steinberg, the impressive scale of the house suggests it was built by someone who would have been mentioned in a saga. And in competing sagas, the Glaumbaer locale is one of two places mentioned as Karlsefni’s new home upon his return to Iceland.

The Greenlanders’ Saga and Eric the Red’s Saga both originated in oral history, and both survive in written versions from the 13th century, 200 or more years after the Vinland voyages. The two sagas differ in several details, including whether Karlsefni settled at Glaumbaer or Reynisnes upon returning to Iceland. Linden makes the point that if the house ruin at Glaumbaer is Karlsefni’s, then the Greenlander’s Saga might be considered more accurate than Eric the Red’s Saga. Knowing which saga is more accurate would help to understand the Vinland voyages. The angle of the Smithsonian article is that the (probable) discovery of Karlsefni’s house provides support for the Greenlanders’ Saga. If so, it benefits those interested in Vikings in the New World. Not being a saga expert, I defer this interpretation to others, while noting the possible elision of these versions in histories that state that Karlsefni founded the Glaumbaer farm after an initial attempt to settle at Reynisnes (for example, Byggoasafn Skagfiroinga 2013).

At the same time, I am pleased to be able to see another side of the historical significance of Steinberg’s discovery (assisted with a few additional sources: Byggoasafn Skagfiroinga 2013; Maugh 2002; Nordic Adventure Travel 2013; Sigurdsson 2000). The discovery is important in a larger context than Vinland exploration. The Greenlanders’ Saga relates that Thorfinn and Gudrid had many descendants, founding a prosperous clan. Thorfinn was highly respected, and is credited with the most extensive reports on the Vinland expeditions (perhaps implying that his oral history became the Greenlanders’ Saga). After Thorfinn died, Gudrid is recorded as making a pilgrimage south, later becoming a nun and an anchoress (Sigurdsson 2000:221). 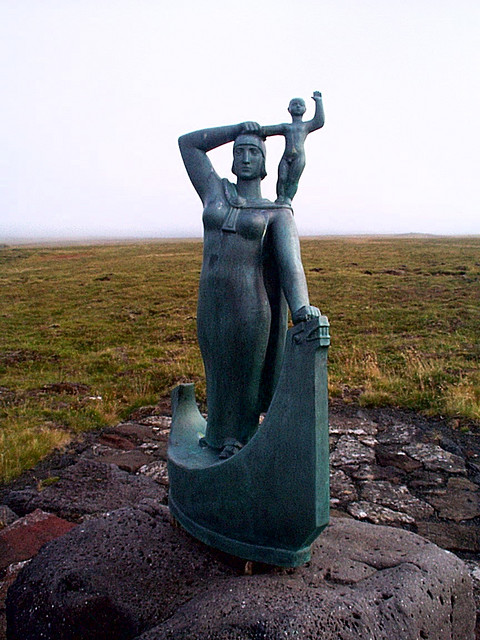 Statue of Gudrid and Snorri. Photo by Lynn Noel

Although placing the family’s home upon return at Reynisnes, Eric the Red’s Saga outlines some genealogy and enumerates some important people descended from Thorfinn and Gudrid through two lines of descent, Snorri’s and his brother Thorbjorn’s. These include a number of important Icelandic bishops (Sigurdsson 2000:224).

In further illustration: as Iceland continued to transform from paganism to Christianity, Snorri is said to have had a church built, while Gudrid journeyed to Rome, met with the pope, and returned to lead a holy life. Gudrid indeed led a remarkable life. She and Snorri are both important historical figures in Iceland– and not just because of the Vinland voyage. Through Gudrid’s travels, in particular, we can see early Iceland in global perspective.

Gudrid and Snorri have long been associated with the Glaumbaer site, where a statue of Gudrid with a small Snorri on her shoulder already stood even before Steinberg’s discovery. Steinberg’s apparent discovery of Thorfinn Karlsefni’s house (sometimes presented as Snorri’s house; Maugh 2002) greatly enriches the interpretation of this important site, in addition to broadening the Vinland story.