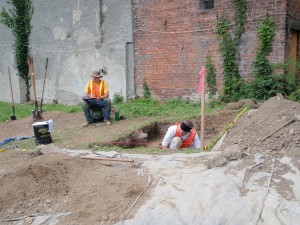 Broad Street, 2012. Three teen boys made their way up Broad Street. Jay said good-bye to his friends at Fourth Avenue and continued up the street, past the new homes at the corner of Third. They had stopped by the archaeological dig on Alexander Street again today. They had watched for a while and talked some more with the archaeologists. It was definitely cool, Jay thought. It wasn’t like the TV shows about digging up old stuff and selling it. These archaeologists were going to study what they found, write a report, and try to find a museum to keep the stuff they were finding. The head archaeologist didn’t like the TV shows. He said they were “ruining our precious heritage.” Whatever. This was different though. Watching and talking back and forth, Jay could see how the archaeologists could “read” the past through different soil layers, where the deeper soil contained the older artifacts. Things were still pretty much in order, depending on when people threw them away. The archaeologists kept measuring the depth to 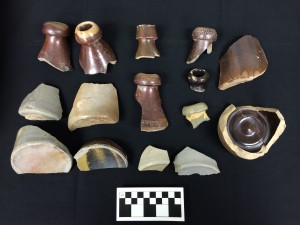 Part of the profusion of stoneware beer bottle fragments from 15 Alexander Street.

make sure of just how deep everything was buried. The archaeologists’ trowels slowly dug away the dirt and cleaned off the artifacts: everything appeared just about where it was when it was thrown on the ground in the 1800s. Back then,people off the boat from Germany lived in the South End, and the archaeologists were uncovering what they had left behind: lots of white oyster shells, bones from food, and plenty of pieces of brown ceramic bottles. They were going to learn how people from Germany lived in Albany back in the 1800s. Definitely cool. 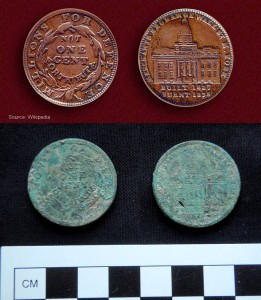 This 1837 Merchant’s Exchange Hard Times token (bottom) was found in the clay spoil layer below the Dasch family midden at 15 Alexander Street. An uncorroded example is provided for comparison (top).

15 Alexander Street, 1852. John Dasch, Sr., and his wife Catharine stood before their building lot in the growing German neighborhood of Albany’s South End. John contemplated the sparse ground cover of plantains and other weeds growing in the clay spoil that covered the lot. He spoke to her in German: “In our homeland we had trouble, and found it hard to live. But we have journeyed over the Atlantic, and tried our chances in New York City. Now, together, we finally greet our destiny in Albany. I will build our house with a strong foundation, and erect on it a structure that honors our family, street, and city. And here, where even the weeds struggle, we will thrive.” 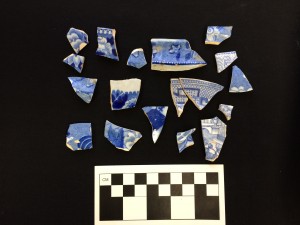 The home construction of John and Catharine Dasch represents a local trend in Albany’s South End in which new homes were built by the individuals who owned and occupied them. John Dasch was a moulder who worked a short distance away at ironworks located east of South Pearl Street. Albany was a center for the molding and manufacturing of formed iron products (particularly stoves). The Dasch’s sometimes had a renter, and for a period of time, the second household under this roof was that of their daughter Mary Ann and her husband, Jacob Cook.

70 Broad Street, 1857. The spades of John Gutmann’s laborers cut a trench for the new foundation, shoveling aside the dark brown topsoil, scattering the pieces of old dishes: some were printed blue, some were printed red, some had been plates with blue or green feathery edges. Others had gaily colored, painted floral designs, while some had brick-textured red bodies and flowing, yellow decoration under clear glaze. The work-men’s shovels bit into the clayey subsoil, throwing it on top of the pile. 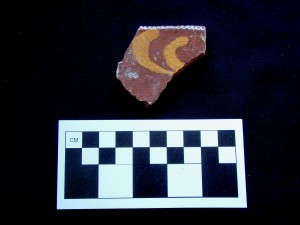 John Gutmann, born in Prussia, bought 70 Broad Street in 1856. This vignette illustrates a hypothetical event: new construction under his direction to replace or modify the early 19th century housing on the property. Guttman became a long-term owner of 70 Broad Street and his use of the property for apartment rental presents a different living situation than the nearby Dasch property. At 70 Broad Street during this period, numerous (often German immigrant) renter households lived under one roof, and there was a rapid turn-over of renters. Archaeological evidence suggests that ceramics associated with these households were, as a group, less costly than those at 15 Alexander Street. Also, with a wide variety of colors, the transfer-printed wares often may have been purchased as individual pieces rather than larger and more expensive matched sets. The documentary and archaeological evidence from these two sites illustrate variety in the experiences and circumstances of immigrants and working class people in Albany’s South End.

129 Fourth Avenue, Albany’s South End, 1880s. Jacob Cook spoke in German to some prospective customers: “My friends, I present to you our new weissbier…it is weissbier, and it is not just good, it is becoming a new tradition right here in Albany. I offer it at an excellent price for a high quality product. Without doubt, it is very good beer. And we sell it in bottles to men who truly love beer. I prefer it myself. I keep it at home to entertain with when important political friends come to visit.”

Jacob Cook, also German-American, lived at 15 Alexander Street. His work as a beer merchant reflects the activity of an entrepreneur in a business of changing technology and regulation. As with many or most people who lived in the South End at the time, his work-place was a short walk from his home. The record of his political activity indicates that he operated within a faction of Albany’s Republican Party.

15 Alexander Street, Albany’s South End, 1880s. Mary Ann Cook carried a bucket of trash down the back stairs, taking it to dump behind the house. Reaching the ground level, she heard the music of her parents’ piano more clearly. The bucket was full of steak bones, beer bottles, and lots of oyster shells. Jacob had entertained his political friends last night and they spent the evening eating, drinking, and talking about how to “fix” Albany. And here was the usual result: steak bones, beer bottles, and lots of oyster shells. Lots and lots of oyster shells. The refuse clattered across the sparsely weedy yard and she turned to ascend the stairs. Mary Ann kept cats to quell the rats attracted by the bones, oyster shells, and broken, dirty dishes and bottles that accumulated in the yard. 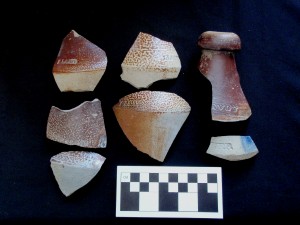 Various historic and archaeological details inform this imagined event. Jacob Cook was a beer merchant. The archaeology at 15 Alexander Street revealed an unusually large assemblage of stoneware beer bottle fragments deposited in a back-yard midden with other artifacts and food remains, such as steak bones, other animal bones, and oyster and clam shells (in which oysters were the strong majority). Jacob was active in politics, and served for a while as a police commissioner. Here it is imagined that he had entertained his political friends at home, and Mary Ann, straining to hear the music of her parental home, was not particularly pleased to clean up afterward.

Mary Ann’s parents had a piano, as it is recorded that they were taxed for its ownership. The animal bones recovered from the midden lacked significant indications of rodent-gnawing, while rat bones were largely lacking from the faunal remains. Might these absences reflect the nocturnal patrols of household felines?

34 Alexander Street, 1880s. As the older John Gutmann reviewed the draft of his will, he spoke to his son John: “We are all growing older, and death has touched this family too often to feel safe in the belief that we– or especially I– shall be here to provide for my sweet grandchildren John Henry and Julia. But the legacy of my buildings on Broad Street can secure their income as they grow up and get their start in life. My will shall set that in motion at the right time, but we must also ensure that we have good tenants, stable families who can afford the rent and want to stay with us. Those buildings have changed a good deal since I started there– I believe for the better. Whenever someone moves out, you must find those good tenants and offer them a home that they will appreciate for years.”

This monologue illustrates part of the changing history of 70 Broad Street. There is a record that this property was probably developed initially by Buckridge Webb about 1809; archaeological evidence supports the view that this lot was occupied in the early 19th century (A longer history of occupation is indicated by the larger archaeological assemblage). During the period when John Gutmann owned the property from1856-1889, the number of households simultaneously occupying the property decreased, while the length of time each household stayed at 70 Broad Street increased. In 1889, John Henry and Julia Gutmann inherited the property and then sold it after reaching adulthood (1903). Eventually 70 Broad Street became the home of the Kearney household, who lived there for several decades, with the owners (husband and wife) John Kearney and Lillian Hoffman sharing their home with Lillian’s adult children for extended periods. 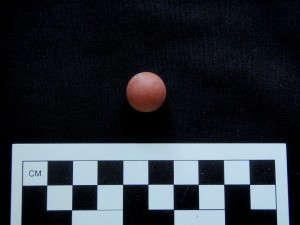 70 Broad Street, 1925. Lillian Hoffman Kearney was busy at work in her kitchen. She was preparing something special, a suckling pig to have with Christmas dinner. As she worked, she thought fondly of her husband James, an Irishman who seemed to thrive on their blended family traditions and her good home cooking. James was her second husband and her cherished partner in a new life. It is almost a miracle, she thought, that we now have this good house with room for the family. Her children, young adults, had been dispersed into foster homes for years when they were younger. With James’ help, she had gathered her family back together, and her children could live here with them as they made their starts in the world.

Read Part 1 of this series.