Many of the sites that archaeologists discover in New York State are referred to as Archaic sites:  sites occupied during the Archaic period from about 3,000-10,000 radiocarbon years ago (or, calibrated, approximately 3,300 to 11,500 calendar years ago).  Many of these sites are small and have relatively few artifacts, especially compared to Late Woodland (500-1,000 year old) village sites.  A prevailing view of the Archaic period is that these sites were occupied by small, simply organized groups of people for very short periods of time.  Archaic period archaeology has often focused on subjects such as general aspects of settlement patterns and chronology, in part because of the meager material remains at many Archaic sites, and in part because of the view that social organization was relatively simple and these small societies were relatively isolated in vast regions with low population density.

Advances in chronology are a relatively recent frontier in Archaic period research in New York, as there is an increasing awareness of the Early and Middle Archaic period cultures (6,000-10,000 radiocarbon years before present/ BP).  Robert Funk (2004) provided much of this awareness, calling attention to the “missing 2,000 years” at the beginning of this time frame, and documenting it in the upper Susquehanna valley (Funk 1993).

Contract archaeologists are contributing to the growing perspective of a larger and more continuous occupation of the eastern New York area during these periods.  Increasing familiarity with Early and Middle Archaic period projectile point types has been a fundamental advance.  Radiocarbon dating also provides an important tool.  For example, Curtin Archaeological Consulting, Inc. documented an Early Archaic pit feature in the Town of Wilton in Saratoga County with a C-14 date of 8760 +/- 40 BP, as well as an intriguing episode of 9th millennium BP Schoharie Creek floodplain-building at a multi-component site in the Village of Schoharie.  I suspect (with support from data recovery projects conducted from Coxsackie to Queensbury) that many of the small sites with a general lack of temporally diagnostic artifacts (so-called “lithic scatters”) are Archaic sites, and that many of these are unrecognized Early and Middle Archaic sites.

These glimpses of substantial Early and Middle Archaic periods underscore the importance of understanding a long history, a history long enough for substantial cultural and social change within societies that started out small, but were growing.  And in contrast to the interpretation of an Archaic period limited to small sites occupied by small groups of people, numerous Late Archaic period sites (especially circa 4000 BP) are large.  Several of the large Archaic sites were some of the earliest studied (by William A. Ritchie, circa 1925-1940).  One interpretation of them has been that they are large because they are accumulations of the remains of countless occupations by small groups.  Ritchie on the other hand, referred to these sites as villages in the 1930s-1940s.

Were they villages?  I suggest that this question identifies another frontier in the study of the Archaic period in New York State.  Given that some of the best Archaic sites to study as villages–  Lamoka Lake, Brewerton, Frontenac Island, and Geneva–  were extensively (and destructively) excavated long ago, much of the investigation of possible Archaic villages will require the reinterpretation of old data.  These investigations will inquire “how were Archaic societies organized?” 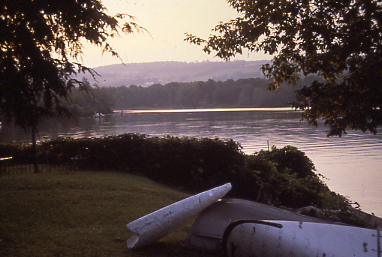 Lamoka Lake at the outlet of the channel

In pursuing this question, it is important to realize that these sites may not have been just villages.  In discussing northern mortuary sites under the rubric of “Landscapes of Historic Practice”, Archaic archaeology expert Kenneth Sassaman (2010) compels us to think about social organization around ritual performance and obligations, and the likelihood that certain Archaic sites were places where ritual performance formed a basis for the social integration of regional populations, including culturally diverse populations involved in processes of coalescence and ethnogenesis.  While I won’t argue that sites centering Landscapes of Historic Practice necessarily are village sites, I see them as providing a basis for village formation (perhaps seasonally, perhaps for longer periods) at Brewerton and Frontenac Island.  To be frank (and brief) I think of Archaic village development as something separate from, probably different than, and historically unrelated to Late Woodland village development.  This sense of rising complexity (and the implication of an eventual collapse and reorganization) of Archaic societies seems a radical departure from existing models of the prehistoric past in New York State.  I hope that greater attention to Archaic period archaeology will test this hypothesis.

Last summer I explored the idea of Archaic villages and significant Landscapes of Historic Practice with reference to the Robinson and Oberlander No. 1 sites at Brewerton.  These sites that sit across the Oneida River from each other appear to be largely contemporaneous, but material culture differences suggest that they may represent different communities of practice, and different sub-regional alliances.  Also, variations between these sites in terms of mortuary programs and arguably high value artifacts suggest that they may have been hierarchically structured in relation to each other, with the Oberlander No. 1 site representing the more dominant community (or possibly a more dominant set of alliances). 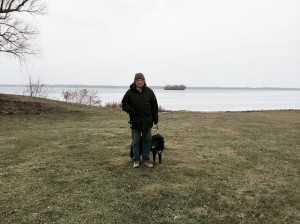 As this summer winds into fall, I will offer two articles on the Frontenac Island site, focusing on how a more detailed historic perspective can help to reveal interactions between diverse regional populations in rich, ritual contexts.  The analysis provided in these posts is based on the succinct yet detailed presentation of data by Ritchie (1945).  My interpretations of data differ in many respects from Ritchie’s, but benefit from developments in archaeology over the last several decades. 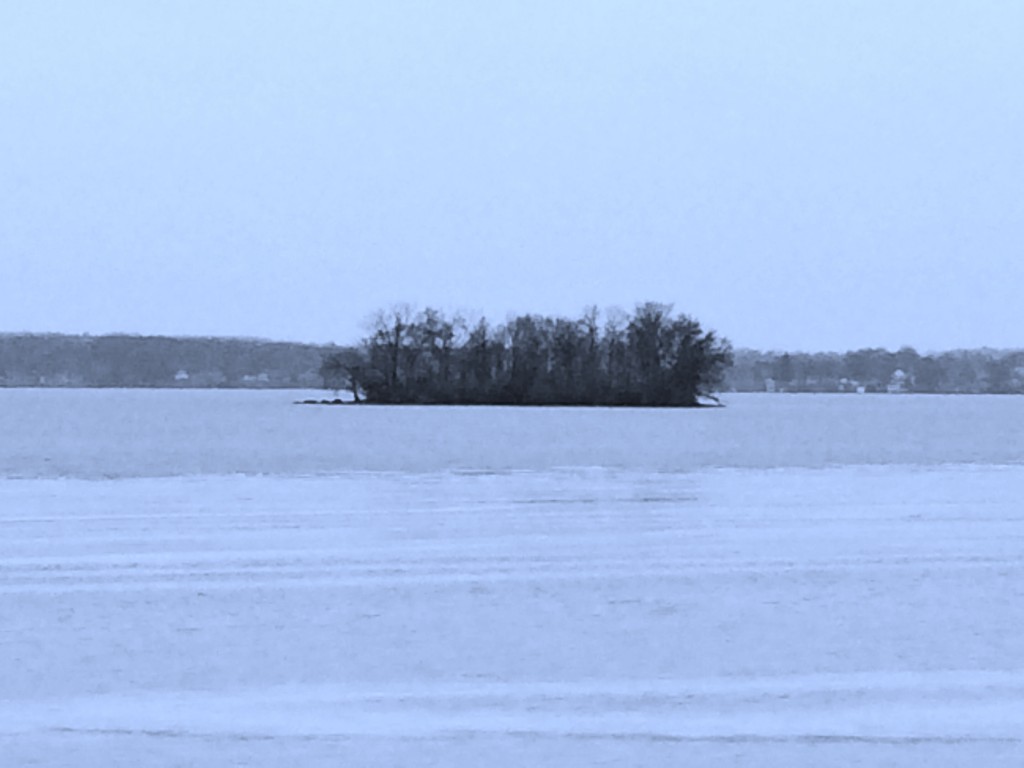 A view of Frontenac Island on a cold winter day

Frontenac Island is a resistant tip of Silurian rock stratigraphy rising just above the water in the northern part of Cayuga Lake (one of the beautiful Finger Lakes in central New York).  It is unique as a limestone island in this region.  The alkalinity of the limestone has preserved human remains, faunal remains, and bone and shell artifacts like no other site in the region has.  Saved in the 19th century from complete destruction by stone mining (for railroad construction), Frontenac Island is owned by the Village of Union Springs, which gave Ritchie permission to work there.  The excavations and report that followed yielded an iconic image of an Archaic site that is unparalleled in New York, and which will no doubt continue to shape archaeologists’ views of the Archaic well into the future.  In these essays I ask whether it is reasonable to see Late Archaic societies as small (with a striking lack of internal diversity, or socially complex interaction) when we are confronted by the evidence of sites such as Brewerton and Frontenac Island.