If history is the process of human life experienced, symbolized, and remembered, then Frontenac Island must be one of the oldest and most significant historic places in New York State.  Frontenac Island, in Cayuga Lake at Union Springs, New York is the last of the four great Archaic period sites excavated by William A. Ritchie between 1925 and 1940 (the others being Lamoka Lake, and the Robinson, and Oberlander No. 1 sites at Brewerton).

Two Streams of Culture
Early in his interpretation of the Frontenac Island site, Ritchie (1944, 1945) came to the conclusion that the archaeological evidence represented cultural contact between the two great streams of Northeastern Archaic culture that he had recognized previously in his investigation of central New York Archaic sites.  Ritchie believed that communities of these two traditions–  Lamoka and Laurentian–  merged into one at Frontenac Island.  The Frontenac Island artifact assemblage had diverse elements of the material culture of both traditions.  Sometimes these were found in close, physical associations, in contexts such as the grave offerings placed with individual burials.

Frontenac Island was an Archaic period burial place, and arguably a place of monumental significance within the Archaic social landscape.  Ritchie excavated 159 human burials there in his 1939-1940 expedition.  Radiocarbon dating and stratigraphic sequence suggest that human burials began more than 5,000 years ago, while multiple grave-sites have been radiocarbon-dated to approximately 3,800 years ago.  Some of the Frontenac Island graves contained artifacts of both Lamoka and Laurentian cultural traditions placed as offerings during funeral rituals.

Some of the grave offerings were marine shell beads, or often, ornaments cut out of conch or whelk shell.  Also, the recovery of several copper implements in the site’s midden expands information about copper exchange networks that also involved Laurentian Archaic sites such as Robinson and Oberlander No. 1.  Frontenac Island, with two streams of culture, also appears to be a place where the copper and marine shell exchange networks met. 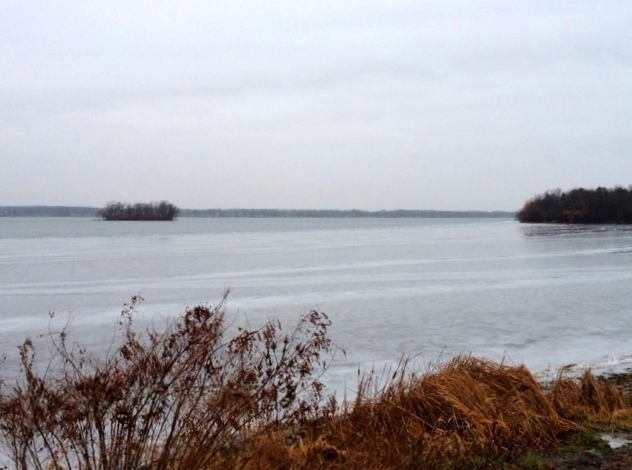 Frontenac Island sits just off the east shore of Cayuga Lake.  A short distance to the north, the Cayuga Lake outlet connects to a network of water-travel routes.

Met, that is, if the shell and copper exchange networks were contemporary with each other.  Frontenac Island has a long history, and sometimes new kinds of material culture were introduced, as when Lamoka material culture was added to Laurentian after about 4,500 years ago.  At the Brewerton, New York Laurentian sites, copper artifacts seem to be an old element of the Laurentian tradition, while marine shell was not found.  So perhaps at Frontenac Island marine shell (also recovered at Lamoka Lake) was used more recently than copper.

In addition to the artifacts, Ritchie saw variation in burial type, with numerous flexed burials such as occurred at Lamoka Lake, and numerous Laurentian-like extended burials, such as he had found at the Oberlander No. 1 site in Brewerton.

Moreover, the craniometric measurements (cephalic indices) that Ritchie made of the skulls indicated the presence of both longheaded and roundheaded individuals, as well as a third group with measurements in-between.  Ritchie regarded the middle (mesocephalic) group as the descendants of longhead (Lamoka) and roundhead (Laurentian) intermarriage.  It is possible, based upon the frequencies of each “type” of skull, that Ritchie inadvertently divided a relatively normal distribution of head-shape measurements into three groups.  I find the cranial information a weak part of Ritchie’s argument, although when I review his report, I see his points about the different burial practices and occasional combination of Lamoka and Laurentian artifacts in some of the grave offerings.

Biological relationships based upon skeletal evidence were studied again in the 1970s (Pfeiffer 1979), with interesting results showing some similarity between human remains from Frontenac Island and other Great Lakes region sites, (although skeletal remains from Lamoka Lake and Brewerton were not included in the study).  The Cole Gravel Pit site in the Genesee valley, with a Lamoka-like material culture, was included in Pfeiffer’s (1979) study and appears to be rather dissimilar to Frontenac Island and the Great Lakes region sites.

Ritchie’s discoveries at Frontenac Island not only yielded evidence of the numerous human burials, but also 13 dog burials, plus the intentional burial of a bald eagle.  Often, dogs were buried with people.  In addition to burials, there was a variety of hearths and pits; a stone platform composed of fire cracked rock (thought to be for roasting food); and several clusters, caches, or constructed architectural features of smooth, round cobbles that had been gathered from the shore-line.  Referring to these as “stone heaps”, Ritchie thought that these clusters of rocks were stockpiles for stone-boiling.  He considered their proximity to burials coincidental.  He noted however, that these stone features were unique to the site.  I suggest the alternative that the round cobble features were symbolic in some way of burial places, or of elements of mythology associated with Frontenac Island.  They may have been constructed as people ritually acted out a particular interpretation of the earth-diving motif of the old and regionally important creation myth (cf. Fox 2004).

The excavation also produced a large variety of artifacts of the sort that would support village life (when found in the midden), or accompany the honored dead into the afterlife (when found in graves).  An additional excavation conducted by Ritchie in 1953 yielded an assemblage of animal bones that indicate a variety of meat and fish, which may signify broad subsistence practices (Ritchie 1969); or at least in part, the remains of feasts conducted when people gathered for mortuary or other communal rituals.  Deer were heavily consumed.  Fish and small animals are present, but were probably more important than they are frequent in the recovered faunal assemblage (recovered that is without screening or flotation).

The Role of Migration Revived
Recently, Kenneth Sassaman (2010) has brought greater attention to migration as a process involved with Archaic period cultural history in the Eastern Woodlands region.  In addition, he has considered the possibility (indeed, likelihood) of the coalescence of neighboring communities (often natives and immigrants) in the genesis of new societies.  Noting Ritchie’s earlier theory of the merging of Lamoka and Laurentian communities, Sassaman looks at Frontenac Island as a new society formed from the coalescence of Lamoka immigrants and Laurentian natives; and an instance of interaction between two groups he refers to as Ancestry I and Ancestry II, whose different roots may extend ultimately to Paleoindian times, and whose contact experiences (he argues) recurred in different times and places across eastern North America.

Sassaman examines in particular the apparent blending at Frontenac Island of seemingly distinct fishing technologies and practices, such as Lamoka line-fishing with bone fishhooks (which he argues was inherited from a southern, Shell Mound Archaic tradition), and fish-spearing with bone or antler harpoons, considered a distinctively Laurentian (and northern) practice.  In addition, there is another possible set of parallel fishing technologies involving use of large assemblages of notched pebble netsinkers, a Lamoka tradition; and the use of polished or rough stone plummets, a Laurentian tradition (although fewer in number than pebble netsinkers, plummets often were highly crafted).  Plummets, harpoons, fishhooks, and another line-fishing implement, the bone gorge, were sometimes included in varying combinations as grave offerings at Frontenac Island.

Mortuary Traditions and Historic Places
Elsewhere in his examination of the Archaic, Sassaman (2010:78) refers to Northern Mortuary Traditions involving “emergent rituals of regional integration”.  Often in these traditions, culturally diverse populations would come together at distinctive locations upon the landscape; or minimally, at places imbued with a history meaningful in the sense that historical interpretation provided a basis for articulating differing identities and cultural practices.  These sites were physical and symbolic settings for building social organizations larger than local communities.

I view Frontenac Island as this kind of place:  a distinctive natural setting that, through use and historical reference, centered and integrated a large, culturally diverse landscape (in Sassaman’s words, a Landscape of Historic Practice).

This is the first in a series of posts focusing on how a more detailed historic perspective can help to reveal interactions between diverse regional populations in rich, ritual contexts. You can read the introduction to the series here.

If you enjoyed this post, please consider leaving a comment or subscribing to the RSS feed to have future articles delivered to your feed reader.
... other posts by Edward V. Curtin