“Nasty Rods of Rust and Dirt”

Anyone who has participated in an archaeological excavation learns very fast that one of the most common artifacts found are nails.  This is true no matter what type of site is excavated, be it a colonial military settlement, a rural farmstead context, or an urban site.  Such ubiquity can often have the unintended consequence of making nails seem like “boring” artifacts that do not warrant much analytical attention, and unlike ceramic or glass sherds, the “nasty rods of rust and dirt” that nails become after long periods in the ground are simply not fun artifacts to study.  Despite these precautions, nails are an important data source for archaeologists and a brief review of some of their more important characteristics as relate to archaeological analysis is in order. 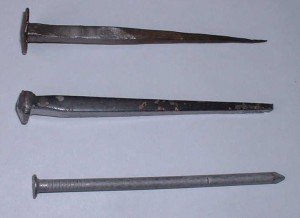 In certain cases nails can offer the best means to date an archaeological site.  Unlike glass and ceramics, which may have been purchased or obtained at various times during a site’s occupation, construction materials such as nails should date very closely to the initial construction date of a site’s structures.  This is only true, of course, if specific attributes of nails have chronological significance.  Broadly speaking, nails can be divided temporally based on the technology of their manufacture, with hand-wrought nails dating the earliest, machine-cut nails next, and wire nails last.  Associated calendar dates for these nail types vary, but generally speaking wrought nails date prior to the late 18th century, early machine-cut nails post-date 1790, and significant production within the US of wire nails began in the mid-1880s.  Of course the use of any one nail type overlapped that of another; wrought nails, for example, continued in use after the introduction of early machine-cut nails because the latter were cross-grained (the metal grain ran perpendicular to the nail shank) and thus not suitable for clinching.

Distinguishing excavated nails on the basis of the three main types usually only requires visual inspection.  Because they were hand made, wrought nails display considerable variability in their morphology compared to later nails.  Wrought nail shanks are square in outline, with each side tapering to a point.  A common wrought nail is referred to as a “rosehead” because of the shape of the hammered facets on the head when viewed from above.  Machine-cut nail shanks are rectangular in outline, with two sides parallel and two sides tapering to a point.  Early machine-cut nails were hand-headed with the grain of the metal running perpendicular to the shank.  Wire nails are the easiest to identify given the obviously round shape to the shank and head.  In terms of typology, machine-made nails can be classified into the greatest number of chronologically significant subtypes based on such attributes as: direction of grain, how the nail head was manufactured, the use of iron or steel, and how the nails were cut from the original nail plates.

Archaeologists have done some very interesting analyses with nail data.  Stanley South, for example, has defined the Frontier or Architectural Artifact Pattern on the basis of the high ratio of nails to ceramics found in frontier military settlements.  South based the initial study on sites dating to the French and Indian War, arguing that such sites demonstrate short occupations with a considerable amount of construction activities as compared non-frontier, domestic sites.  More recently, William Adams has compiled published American nail production data for the years 1880 to 1954 to derive a year-by-year ratio of cut and wire nail production.  From these data archaeologists can compare cut and wire nail ratios from excavated contexts to help derive better chronological control.

Though rusty fragments of metal, nails can provide a wealth of data and research possibilities.  The following references are useful sources for those interested in learning more about the archaeological analysis of nails:

This article was originally published in the Spring 2004 edition of the Fort George Advice,  The Newsletter of the Lake George Battlefield Park (Fort George) Alliance.

0saves
Save
If you enjoyed this post, please consider leaving a comment or subscribing to the RSS feed to have future articles delivered to your feed reader.
... other posts by Andrew Farry