Upon occasion, my work takes me to the New York State Museum to consult with scientists or to use the archaeological collections.  I made one such trip on December 2, 2010 in order to study the artifacts from the Vosburg site, an Archaic period (3,000-10,000 years old) site located in Guilderland, New York.  I did this in relation to archaeological impact reduction measures required due to development in the area.  The work I was doing was mandated by the State of New York and the U.S, Army, Corps of Engineers because of their responsibilities to minimize adverse effects upon important historic resources when wetland disturbance permits are issued.  The development project was economically significant to both the Town and the developer, and has also resulted in the long-term protection of the Vosburg site and a good deal of open space. 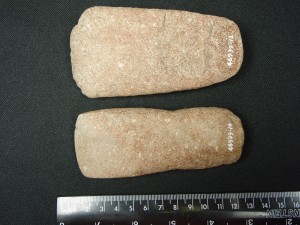 My appointment was with the archaeology Collections Manager, Andrea Lain.  For efficiency’s sake, I also planned to meet with Archaeology Curator Jonathan Lothrop regarding another project (known as Solar Field) where my archaeological survey team had found some possible (13,000 year old) Paleoindian artifacts.  Andrea provided me with room to conduct my analysis and rolled out carts containing the Sundler collection from the Vosburg site, as well as other items that could have a bearing on my study.  Jon examined the artifacts I brought to show him, and he and I eventually moved into the archaeology range to compare the Solar Field artifacts to Paleoindian artifacts from the West Athens Hill site.

The study of the Vosburg site artifacts helped to provide a more complete understanding of ancient Native American settlement and land use within the mandated study area, establishing a much longer and more eventful Indian history of the area than had been known previously.

well-documented type collection, assuring accurate reporting on the Solar Field project.  These activities of my visit–  using the Sundler collection as a varied source of data for applied research, and using the West Athens Hill collection (by way of Jon Lothrop’s expertise) as a source for type specimens for comparative purposes–  are particular examples of some of the fundamental reasons why, for over 150+ years, history, anthropology, and natural history museums have been created and sustained.  Moreover, professional staff who are well-versed in the substance and meaning of the collections are essential to realize the museum mission.  For example, the 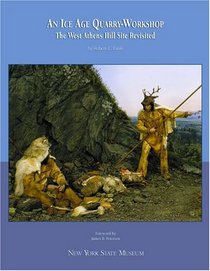 Archaeology Curator’s knowledge and strategy made possible the chain of thoughts and decisions that beneficially led to the West Athens Hill collection, aiding the Solar Field project, and serendipitously preparing me to more effectively approach my own role in advising future economic development projects.

While at the State Museum, I also had the opportunity to speak with Historical Archaeology Curator Charles Orser about an important collection from the 18th century Lake George battlefield site; bioarchaeologist Lisa Anderson about her research on the Frontenac Island site (one of the key Archaic period sites in New York State); and visiting researcher Wayne Lenig concerning his comprehensive analysis of Mohawk tribal sites, very extensively involving New York State Museum collections from the Mohawk valley. 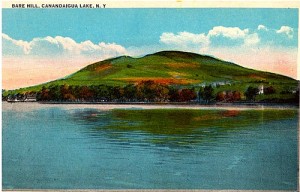 to offices, I recalled other projects involving New York State Museum archaeology collections:  Lisa Anderson’s analysis of the Vine Valley site at Bare Hill on Canadaigua Lake, which helps modern-day people to understand the creation of native history by the Seneca during the pre-contact period; Christopher Lindner’s study of shell beads from the Barton site (Washington County) as an aid to understanding bead production during the Early Woodland period some 2,500 years ago; and Liz Chilton’s analysis of Mary Butler’s collection from the Goat Island Rockshelter (Dutchess County).

Mary Butler was one of a very small group of women archaeologists who worked in the United States during the early 20th century.  Butler’s 1939-1940 Hudson Valley Archaeological Survey was headquartered at Vassar College; the survey and excavations were supported by the Carnegie Corporation.  As a Masters thesis project, Liz was able to put Butler’s work into a significant site report benefiting from modern day concepts of chronology, cultural context, and artifact analysis.  In Liz’s words, her study involving Butler’s collection brought “New Light from Old Legacies.”

While the use of the circa 1939 Butler collection or the circa 1922 Vine Valley collection may seem extraordinary, since such significant new information was obtained from collections made so long ago, most of the time archaeologists and other scientists and historians working with museum research collections would see this discovery of new information as normal.  The information value of the collections is not exhausted at any particular moment, and as professional perspectives change over time, the value of the collections as sources for significant information seems overall to increase rather than decrease.  It is even possible that increased study of older collections in the future would allow archaeologists to specifically target needs for new field data, allowing future excavations to be smaller, saving scarce research funds, and furthering archaeological site conservation.

Going from one room to another during my visit, I passed Bob Funk’s old office, where he worked when he was the State Archaeologist.  As I mentioned last week, the position of New York’s current State Archaeologist, Christina Rieth, is jeopardized by the next round of state employee layoffs.  As I recall the mission of my December trip to the State Museum, I note with unhappiness that the layoffs of five State Museum scientists, including Christina Rieth, Jonathan Lothrop, and Charles Orser are impending.  According to news reports in Albany this morning, budget discussions between Governor Cuomo and the union that represents the scientists (the Public Employees Federation or PEF) remain stalled.  Thus, it is still the case that the Chancellor of the Board of Regents would need to rescind the State Museum layoffs in order to prevent them from going into effect.  I urge you to write to Chancellor Tisch if you have not yet done so.  Her contact information and some points of discussion offered by the New York State Archaeological Association are listed below: