One Day in the Work of an Archaeologist

My work varies from day-to-day depending upon whether I am in the office or in the field, or what exactly I need to do.  Nonetheless, there are some things I try to do regularly.  Following the advice of the great management consultant Steven Covey, I view my work as addressing a combination of things that are either important and urgent, or important but not urgent.  The long term goal is to make urgent important things fewer by doing important-not urgent things more proactively.  This means that some things need to be done on a regular basis, including the things that prepare you for–  or sustain you through–  the hands-on aspects of your job.

Thus it was that I started Friday, March 23, 2012 by doing one little thing I try to do every day–taking a few minutes first thing in the morning to focus on being relaxed.  A few relaxed minutes before things get hectic helps to be more responsive (and less reactive) to what needs to be done later.

Since I oversee a small archaeological consulting firm, it is also important for me to keeping current in the fields of archaeology and business, and this is another almost-daily activity.   On Friday, I took another step toward currency early in the morning by reading a chapter in After the Ice:  A Global Human History 20,000-5,000 BC by archaeologist Steven Mithen.

Reading this book is part of my current goal of broadening my understanding of ancient hunting and gathering societies and early farming communities on a world-wide basis in order to assist my understanding of the archaeology of eastern North America.  It’s a way of gaining perspective.  In the spirit of working on important-not urgent, I try to read for about an hour every day if possible.  Other books I have been reading over the winter include The Little Big Things by Tom Peters, a sort of manifesto for understanding the nature of doing business during the Great Recession.  I am also starting to take a good look at Doing More with Less, by Bruce Piasecki, another

book to come out of the recession (but, like The Little Big Things, a book with an enduring message for the “recovery” and beyond).

Checking my email from home, I found I had a message from Governor Cuomo.  A while back I inadvertently got on the Governor’s mailing list, and so his messages arrive rather frequently, and I don’t usually reply.  But Friday’s message announced a Women’s History exhibit in the Hall of Governors, so I took a brief moment to give the Governor some positive feedback.  How could this not be important for someone interested in history?

Putting the reading and email aside, I drove to the office.  In the car, I looked ahead to a couple of posts to write in the near future, and reviewed my intentions and specific plans for a day of office work.  Friday in the office would require at least one important phone call, but most of the day would involve research and inferences regarding mapped and electronically stored archaeological information (i.e., I would be doing a lot of hands-on archaeology, but I wouldn’t actually be looking at any artifacts—at least not on Friday, March 23).

In the office, I conferred with Kerry about our work, and then shifted to the first task at hand.  This job involved consulting by phone with a colleague in the State Historic Preservation Office (SHPO) about the spatial extent of a project that had the potential to affect archaeological resources.  This was a conversation that was essential to determining how the continuing consideration of the archaeological review process would occur.  In terms of urgency and importance, this conversation definitely was important, but not a crisis management situation, because I try to allow time for this project every week, and in this case determined to follow through on the issue at hand within a two-day rather than two-hour time frame.

The next job of the day was a review of artifact occurrence across a map of another proposed construction project to determine whether the home site of an early pioneer could be avoided by realigning a road.  The final answer is yet to come because it will require consultation and review by others, but after about an hour of looking at data and thinking the situation through, the possibility of archaeological site avoidance seemed feasible.  While people often imagine archaeologists excavating and making discoveries (and I often imagine myself this way), helping others to avoid archaeological impacts is a major part of the job of an archaeological consultant.

I spent the rest of the afternoon working on the analysis of data from the archaeological project in Wilton, New York mentioned in Fieldnotes on February 17, 2012.  This work is being done as a requirement of a New York State Department of Environmental Conservation approval of a construction project.  Curtin Archaeological’s continuing goal in this analysis is excellence in archaeological investigation.  I have heard that archaeologists used to say that about 30% of an archaeological project was spent in the field and 70% was spent in the lab.  I would venture to say that given today’s concerns with varied and detailed analyses (in archaeology and every other science, CSI and Bonesfans), the time spent in the lab and at the computer often requires more than 70% of the Principal Investigator’s time in an archaeological data recovery project.  I spent much of Friday afternoon 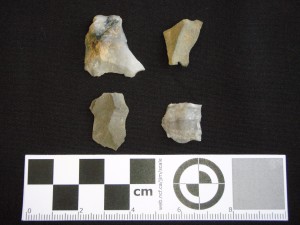 Some chert varieties from the Wilton project site

reviewing where all of the prehistoric artifacts had been found, and finished by examining how different types of artifactual stone (Normanskill chert, Fort Ann chert, quartz, quartzite, slate, chalcedony, and various, miscellaneous flinty materials) occurred in different percentages in different soil strata.  The point is that the different stone materials are associated with different regions of New York and New England, and changes in their prevalence at different depths may indicate how the site was used by people from different regions at different times.  The result of this analysis proved exciting, and after Kerry and I considered how it is going so far, I left the office with a great feeling of satisfaction (a feeling not guaranteed every day).  I will discuss these analysis results in Fieldnotes in the not-too-distant future.

Before arriving at home, I ended the day with some exercise, another important-not urgent activity (mostly walking) I try to do for a half-hour several days a week.  Important-not urgent things are regularly scheduled to avoid urgent crises:  scheduled in the case of exercise to avoid stress and other health problems.  I strongly recommend regular exercise, as do many others, such as Tom Peters: turns out exercise is a potent, anti-recession Little Big Thing.