The Bicentennial of the War of 1812

This month marks the 200th anniversary of the beginning of the War of 1812. In a recent All Things Considered broadcast I heard this war described as more or less a footnote to history in American social studies classes, but a major component of history education in Canada, as it is seen there as a significant event in the formation of national identity.

Although this war is too-little noted in the U.S., New York State’s landscape is rich in places associated with the War of 1812. This abundance of 1812 history is due to the fact that much of the war was fought along the U.S-Canada border. In those days much of the U.S. border separated Canada from New York at the northern end of Lake Champlain, along the St. Lawrence and Niagara Rivers, and across Lakes Ontario and Erie.

From an American perspective, in the dawning years of the 19th century an uneasy relationship developed between the British Empire and the United States over a number of things, such as the kidnapping and forced service of American citizens by the British navy, and trade restrictions viewed as unfair in the United States. Relations between the two nations deteriorated over a number of years. On June 1, 1812, President James Madison began the process of fact finding and reports to congress that built toward the declaration of war– which soon passed Congress– and the U.S. went to war with Britain on June 18, 1812.

This might not have happened today, or even in the late 19th century, when people could communicate quickly by transatlantic telegraph. Unbeknownst to the Americans, the British had decided to ease up on trade restrictions due to a change in leadership and perspective in the British government. But the news of this change needed to cross the Atlantic by sailing ship, and it arrived after the Americans had started the war. Of course, we can’t rewind history and replay it with a different script. We can’t know the difference “what if…” could make.

For the first two years of the War of 1812, Great Britain was distracted by warfare in Europe, and did little of consequence to end the cross-border campaigns and naval maneuvering. During this period, New York State provided the base for much of the Americans’ operations and the struggle to control the Great Lakes (as at the 1813 Battle of Sackets Harbor). However, by the middle of 1814 the British became more engaged in the war, which had been a crisis for the Canadians but of secondary importance to the empire. From late summer into the winter, the British launched three offensives intended to crush the Americans, one at Plattsburgh, New York; one in the Mid-Atlantic region; and one in Louisiana.

Plan of the Battle of Sackett’s Harbor, from Benson J. Lossing’s Field Book of the War of 1812

“…I have the honor to convey to you the flags of his Brittanic majesty’s late squadron, captured on the 11th…”- Thomas McDonough, Commandant of the American fleet at the Battle of Plattsburgh

The British attempt to invade by land and water from the north was successfully met and thwarted by the American forces under McDonough and General Alexander Macomb, September 11, 1814. The American victory at Plattsburgh was instrumental to forging the Ghent peace treaty in December, 1814.

“…the rocket’s red glare, the bombs bursting in air, gave proof through the night that our flag was still there.”- Francis Scott Key, eyewitness to the British attack on Fort McHenry, September 13-14, 1814. 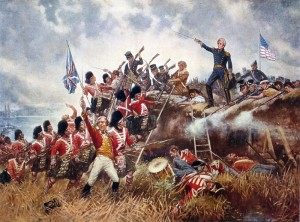 “Old Hick’ry said we can take ‘em by surprise if we didn’t fire our muskets ‘til we looked ‘em in the eyes…”- Jimmy Driftwood, 20th century songwriter, popularizing the Battle of New Orleans.

In the January 8, 1815 Battle of New Orleans, future U.S. president Andrew Jackson defeated the invading British force in the last battle of the War of 1812. Not much different would have happened if the British had won the Battle of New Orleans, because on December 24, 1814, U.S and British representatives signed the Treaty of Ghent, ending the war. The treaty was ratified in Great Britain on December 27, 1814, and in the United States in February, 1815. There was no issue to delay ratification in the United States. It just took a long time for the treaty to come over by boat from Britain.

If our early 19th century diplomatic corps could have telephoned or even telegraphed the Christmas Eve, 1814 news back home, the Battle of New Orleans would not have been fought. But, if the British could have called or sent a telegram concerning trade policy in 1812, maybe the war wouldn’t have started in the first place. Perhaps the truly significant thing to contemplate is that except for minor friction from time to time, this is a peace that has held for almost 200 years. There aren’t many peaces like that around.

New York Sites
New York State has a great many sites associated with the War of 1812, ranging from small, local historic sites, to larger sites with a definite heritage tourism draw, to extensive sites that were quite important during the war, but are not so well-known now. 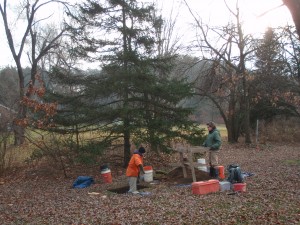 For example, the Town of Malta in Saratoga County has a Parade Ground connected to the war. In the 1770s the Parade Ground was set aside for public use by Michael Dunning, an early settler of Malta, and used for military drills during the American Revolution. Succeeding generations of Dunnings and their neighbors used the Parade Ground during the War of 1812, and it was used once again for military training during the Civil War. The Parade Ground is still visible today in the broad open space fronting Dunning Street east of Route 9 in Malta.

At the afore-mentioned Sackets Harbor on Lake Ontario is the Sackets Harbor Battlefield State Park, where the struggle to control the lake and the nearby St. Lawrence valley is interpreted for visitors.

The City of Plattsburgh: Much of the land-battle in the Battle of Plattsburgh was fought within the modern city limits. The vicinity between the Saranac River and Lake Champlain is noteworthy because of the locations of Forts Brown, Moreau, and Scott (defended by the Americans). Striking out on your own or with friends for an archaeo-tourist experience, Plattsburgh’s multiple historic markers provide a guide to locations important in the 1814 battle. Also, archaeologist Dr. Timothy Abel recently has been investigating the site of a slightly earlier American installation, Pike’s Cantonment (1812-1813), where he collects important information while training field school students.

Worth a Look:
Peter S. Palmer’s venerable History of Lake Champlain is a good source of information on the War of 1812 in the Plattsburgh area. It was written some two generations after the events described. My copy is the fourth edition, issued by Purple Mountain Press, Fleischmanns, New York in 1992. Maps added in the fourth edition help to visualize the action.