Over the weekend of April 15-17, Kerry Nelson and I attended the joint meeting of the New York Archaeological Council (NYAC) and the New York State Archaeological Association (NYSAA), along with about 150 friends and colleagues.  For NYAC, it was the spring meeting, and there was a program on educational outreach to the public.  For NYSAA it was the annual meeting, when the state-wide membership comes together to conduct business and hold a conference highlighting research.  The meeting was hosted by the Van Epps-Hartley Chapter of the NYSAA, and was held at the Holiday Inn in Johnstown, New York.  Today I will discuss some of the main events, and during the next week or two I will highlight some specific topics of interest to the conference. I will also provide a brief report from the Robert E. Funk Memorial Archaeology Foundation, which gave reports to each organization.

The NYAC program presented on Friday afternoon was titled “Archaeology and Education:  Reaching Lay Audiences of All Ages.”  The settings for this outreach includes (1) week-long, applied learning sessions for children, conducted by Hartgen Archeological Associates as one aspect of a broader environmental education program at the Schoharie River Center; (2) an adult education (non-credit) certificate program offered by Schenectady County Community College; and (3) professional development workshops for teachers of Grades 2-8 provided by the New York State Museum.  This, too, focuses on a week-long program involving instruction, fieldwork, and interpretation.

NYAC Board Member Matt Kirk led a discussion following the presentations on educational outreach programs, noting various successes and challenges.  To be brief, one of the major challenges of these programs is collection curation, which will need to be addressed in situations where the program sponsor is not a museum.  Perhaps the greatest benefit or strong point is the outreach itself, which brings archaeology as an experience to more people, and can create a sense of stewardship of archaeological sites and collections within communities.  These effects may be multiplied many times over when teachers are involved, because they actively bring archaeological knowledge and perspectives to school curricula.  State Archaeologist Christina Rieth reported that the State Museum program receives very positive feedback in followup comments. 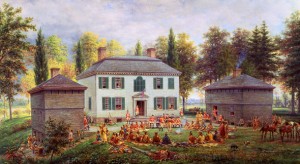 A tour of Johnson Hall, the 1760s-1770s home of Sir William Johnson was given on Friday afternoon.  Johnson Hall is a State Historic Site operated by the New York State Office of Parks, Recreation and Historic Preservation.

The Saturday morning-early afternoon session was on prehistory, and mostly focused on the Hudson and Mohawk drainages.  I will say more about some of these papers later this week.  One of the high points, the presentation on the New York Paleoindian Database Project, involved a project that is statewide in scope, but often focuses on the Hudson valley because, as authors Jon Lothrop and Meredith Younge showed with a great set of slides, that Paleoindians migrating into New England after deglaciation needed to pass through eastern New York.  Here, I can only provide the tease that this paper presented some great data on this topic.

The Saturday afternoon session was devoted to papers and presentations commemorating the life and career(s) of the great Gordon DeAngelo, who passed away during the Fall, 2010.  Gordon’s wife, Barbara DeAngelo, recalled moments of Gordon’s life and read a poem he wrote as a young man recently struck by polio.  Many friends and colleagues also gave presentations, including Peter Pratt, Ellie McDowell-Loudan, Paul Huey, Mary Ivey, Greg Sohrweide, Doug Rainbow, Louise Basa, Carolyn Weatherwax, Monte Bennett, and David Starbuck.  For those readers who didn’t know him, Gordon was a wonderful man, an avid avocational archaeologist, and also a landscape architect for the New York State Department of Transportation.  His role in DOT, as Mary Ivey shared, often included providing the perspective needed to work archaeology into the transportation planning process.  He was a skilled surveyor, and a great expert on archaeology, history and artifact identification.  Considering that Gordon was active in archaeology throughout the second half of the 20th century, Monte Bennett’s choice of actual slides (rather than Powerpoint) very effectively evoked the era when Gordon made much of his immense contribution to archaeology.  The session ended with a recording of a song Gordon wrote about the trials and joys of archaeology. 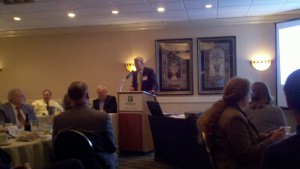 on(1) his dissertation research on Iroquois ceramics, and the possibility of finding in his results an indicator of the timing of the formation of the Iroquois confederacy; and (2) his long-term investigation of the Eaton site near Buffalo.  Remarkably, as Bill has become immersed in understanding the vast data from the Eaton site, he has learned how to better understand palisade construction by delving into the meaning of utilized flake variation.

The Sunday morning program was split between historical archaeology and Iroquoian archaeology.  Two historical archaeology papers are particularly noteworthy because both deal with institutional settings on Staten Island.  These are Sherene Baugher’s paper on the Sailors’ Snug Harbor Almshouse, and Sara F. Mascia and Cece Saunders paper titled  “Mass Burial at the Quarantine Marine Hospital of Staten Island.”  (These papers were great, and I have to admit that listening to the unusual events that occurred in these places, I was struck that their social contexts could be fictionalized into good settings for a Douglas Preston-Lincoln Child novel.  Preston-Child novels always involve things going immensely wrong in spooky places, usually in or around New York City, and feature a heroic rescue at the last minute by the main character, FBI agent Pendergast, typically assisted by members of the police, press, and archaeological community).

The conference ended with a session called Iroquoian Studies.  These papers dealt most often with the protohistoric and historic periods, although Jack Rossen in addition drew heavily on the prehistoric/pre-contact Levanna site.  Jim Bradley and Kurt Jordan dealt extensively with wampum, and to be brief, posed  major questions regarding the timing and social context of when and how wampum came to be.  Wayne Lenig’s paper added to this discussion, while covering the proto-historic period in the Mohawk valley broadly.  Ralph Rataul discussed the issue of St. Lawrence Iroquois influx into the Mohawk valley during the 16th century, and provided some possible ceramic evidence of this from the Barker site.

Following the papers, Wayne Lenig kindly led a tour of the late 17th century Caughnawaga village site, and the nearby Mohawk-Caughnawaga Museum.