On Saturday morning, April 16, several of the papers presented at the annual meeting of the New York State Archaeological Association focused on the Archaic period in eastern New York State.  Adam Luscier led the session off with a paper on the Dunes Site, which was excavated in advance of construction of the Luther Forest Technology Campus (a.k.a. Global Foundries) in the Towns of Malta and Stillwater, 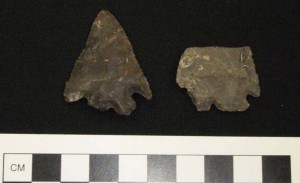 Saratoga County.  The Dune site is an intriguing, small, Vosburg phase Late Archaic site located in the dune fields between Saratoga and Round Lakes in the upper Hudson drainage.  It was discovered as a result of archaeological surveys conducted as part of Cultural Resource Management (CRM) review.  In addition to summarizing the Dune site, Adam’s paper also considered larger aspects of Late Archaic settlement pattern in the Luther Forest-Saratoga Lake-Fish Creek area.

A little later, Scott Horecky revisited the lower Hudson oyster middens at Kettle Rock and Dogan Point, offering a current perspective on these sites along with a review of the ideas of the 20th century archaeologist Louis A. Brennan.  The presence of Scott’s paper in this program significantly balanced the geographic bias toward the upper Hudson drainage found in several other papers, and provided important information on the very distinctive lower Hudson shell mound complex.

Scott’s paper was followed by Tom Weinman’s enlightening presentation on five sites located along Coxsackie Creek in Greene County, New York.  The present writer was impressed by the importance of the information provided by these sites, including stratified sequences that illustrate the temporal position of Genesee points (Batten Kill phase), and the abundance of evidence pertaining to the River phase.  Some of the information that Tom has gleaned over the years concerning Coxsackie has been published previously in The Bulletin:  Journal of the New York State Archaeological Association (These articles typically were co-authored with his brother Paul and sometimes with former New York State Archaeologist Robert E. Funk).  Information from the sites along Coxsackie Creek was synthesized for the 2011 NYSAA conference and presented in a single paper with a very comfortable feel.

Later in the session, Ed Curtin provided a broad paper on the Archaic in eastern New York, starting with the growing body of diverse evidence of Early and Middle Archaic occupation, and then briefly discussing the subjects of landscape, organization, identity, history, and florescence.  Curtin’s paper acknowledged borrowing or developing concepts offered previously by Kenneth E. Sassaman, Robert E. Funk, and Daniel F. Cassedy for the Eastern Archaic; and Ian Hodder for ideas involving the realization and role of history in pre-literate societies.  The presentation examined recently analyzed information from a variety of sites including the Vosburg type-site and small sites within its landscape; and explored concepts such as circular community plans, histories of forest clearing and alteration, and some possible 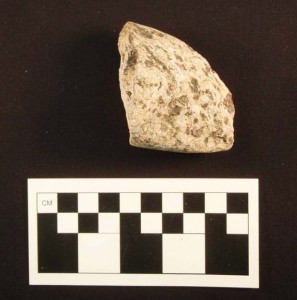 Presentations in this session by Jamie Marie Meinsen on the Perry site, and Joseph E. Diamond, Thomas Amorosi, and David Perry on the Wolfersteig site provided information on multi-component sites where occupation originated during the Archaic.  Of interest to students of the Early Archaic, a possible Charleston Corner-Notched point was found at the Perry site.  Of interest to students of the Late Archaic florescence, occupation of the Wolfersteig site began during the Sylvan Lake phase.

The final paper dealing with the Archaic period was presented by Jaclyn Nadeau, whose Ph.D. research compares lithic debitage assemblages from a variety of well-documented Archaic and Woodland components in order to track the transition to sedentism in eastern New York State.  Jaclyn presented some exciting results on this subject, which will not be mentioned with any specificity here in order not to let the cat out of the bag prematurely.  However, this research is moving along well, and the reader should look forward with great anticipation to the completion of this project. 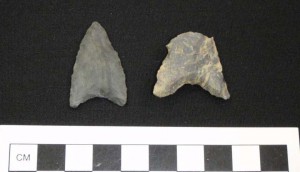