More on the Indian Fort Road Site, Just Acquired by the Archaeological Conservancy 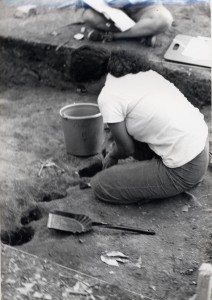 I had the wonderful opportunity to visit the Indian Road Fort site with my
Binghamton University field school students in 1980 when the site was being
investigated by David Jones, then a professor at Cornell University.  At the time, my students were learning archaeological survey techniques and testing Archaic period sites in the nearby Town of Catharine, also in New York’s Finger Lakes region.  We had come on the heels of the exciting news that Professor Jones and his students had found something no one had seen previously in an Iroquois earthwork: the use of interlaced horizontal timbers to strengthen the fortification, keeping the mounded soil from spreading away from the base of the site’s palisade.  The earthwork itself and the palisade had been constructed together as an integrated feature (also including adjoining ditches) on the perimeter of the village site.

I have two photos from that visit, and share them here. One shows a student working in the narrow cross-section trench that David Jones had placed across the earthwork. The student is digging out the palisades’ post molds, since they contain artifacts and “ecofacts” (i.e., environmental information).  The other photo shows students working in the presumed village area of the site, in a careful and exacting process of removing the plowzone by hand in an attempt to discover longhouse walls or interior features such as hearths or sleeping platforms (which would be

Students search for features below the plowzone

marked by post molds similar to but perhaps smaller than those seen in the first photo).  The large, contiguous excavation units bounded by the strings shown in the second photo are conducive to discovering information about the size and internal partitioning of Iroquois longhouses.  At this stage of excavation, however, what we see is the undulating surface where the soil filling the plow scars is being removed from the subsoil.

For anyone interested in more about this site, I leave you with a reference to a short report on the Indian Fort Road site: