On Friday, April 11 I traveled down I-88 to the Spring, 2014 meetings of the New York Archaeological Council (NYAC) and the New York State Archaeological Association (NYSAA).  I am always nostalgic on these trips south to communities such as Oneonta, Binghamton and Owego.  Speeding past Hudson Lake or crossing the Susquehanna River east of Oneonta, I am particularly mindful as the car rumbles over the archaeological sites below the highway. I worked on some of these sites before they built the highway.

On this trip, having just read Bloody Mohawk, Richard Berleth’s great book on New York’s colonial people and wars, I am aware that I-88 follows the route along Schenevus and Cobleskill Creeks that Joseph Brant’s war parties used to reach the Cobleskill and the Schoharie settlements from points west (mixed parties of Iroquois, Tories, and British soldiers used this route and another just to the south following Charlotte and Panther Creeks).  The mind does wander; Berleth’s book, with a chapter on the Palatine Germans, provides some context for my on-going analysis of the house site of the Palatine-descended Adam Shaffer in Cobleskill.  Several years before Shaffer was born, his family fought against Brant’s 1778 raid upon Cobleskill.  I-88 can certainly evoke history; this past weekend it was the road many took to the statewide meetings of New York’s archaeologists.

The NYSAA annual program of archaeological papers began on the morning of April 12th with a series on the Paleoindian and Archaic periods.  The first paper by Jon Lothrop, Jim Bradley, Meredith Younge, and Susan Winchell-Sweeney examined Paleoindian occupations in central New York.  This presentation based upon the New York Paleoindian Database Project outlined the Paleoindian chronological sequence beginning with Clovis-like Gainey points and continuing through later fluted and Plano-like unfluted, lanceolate points (which occasionally are notched, although, as Jon noted, not as boldly as the beautiful example shown in the presentation).  The central New York area within the former basin of glacial Lake Iroquois (now along the Seneca and Oneida Rivers) is studded with extensive wetlands and small lakes.  It contains a notable concentration of Paleoindian projectile points of all periods, and continued to be a focus of Native American settlement and land-use long afterward.

The second paper in this session was authored by Joe Diamond and Tom Amorosi.  This work reporting on the Huyler Rockshelter is based upon the excavations of members of the Mid-Hudson Chapter, NYSAA from ca. 1932 intermittently into the 1980s.  The Huyler Rockshelter is multi-component, including significant Archaic and Woodland components (The Middle Archaic period is represented by a Neville phase component).  One of the noteworthy findings in the rockshelter is the occurrence of a faunal assemblage from well below surface that contains oysters, suggesting the hypothesis that the Hudson in this vicinity, at some point during the Archaic, may have been saline enough to support oyster populations and involve humans in oyster collection.

The final paper in this session was by Sam Kuderle.  It described the excavation and analysis of the John Moore Farm site located near the confluence of the Chenango and Susquehanna Rivers in Binghamton.  This site contains evidence of Late Archaic and Transitional period campsites, including 16 cultural features and fragments of steatite pots.  The full analysis looked beyond the John Moore site itself, employing a GIS-assisted landscape model to ascertain that this site has optimal environmental variables associated with human occupation.  The paper also considers how this section of the Susquehanna drainage was involved with populations to the south in terms of trade and interaction.  Neutron Activation Analysis was used to associate the steatite from the John Moore Farm site with sources in the mid-Atlantic region.

At the beginning of the afternoon session Renee Walker, Cynthia Klink, and Nicole Weigel offered two papers on the Pine Lake site located along Charlotte Creek near Oneonta.  The Pine Lake site is a series of floodplain and nearby ridge locations.  Intensive occupation occurred 3,000-4,000 years ago; features include hearths, pits, and postmolds.  The diverse artifact assemblage indicates subsistence activities such as hunting, seed and nut processing, and fishing.  The possible meanings of projectile point diversity provide another focus of the Pine Lake investigation.  Pine Lake appears to be a very important Archaic site.  The long series of investigations at Pine Lake by SUNY Oneonta and Hartwick College–  reaching back into the 1970s–  is benefitting from the renewed attention of the recent joint Oneonta-Hartwick field schools (held at Pine Lake every two years).  It is now possible to synthesize understandings that draw upon the older information in addition to the data being obtained currently. 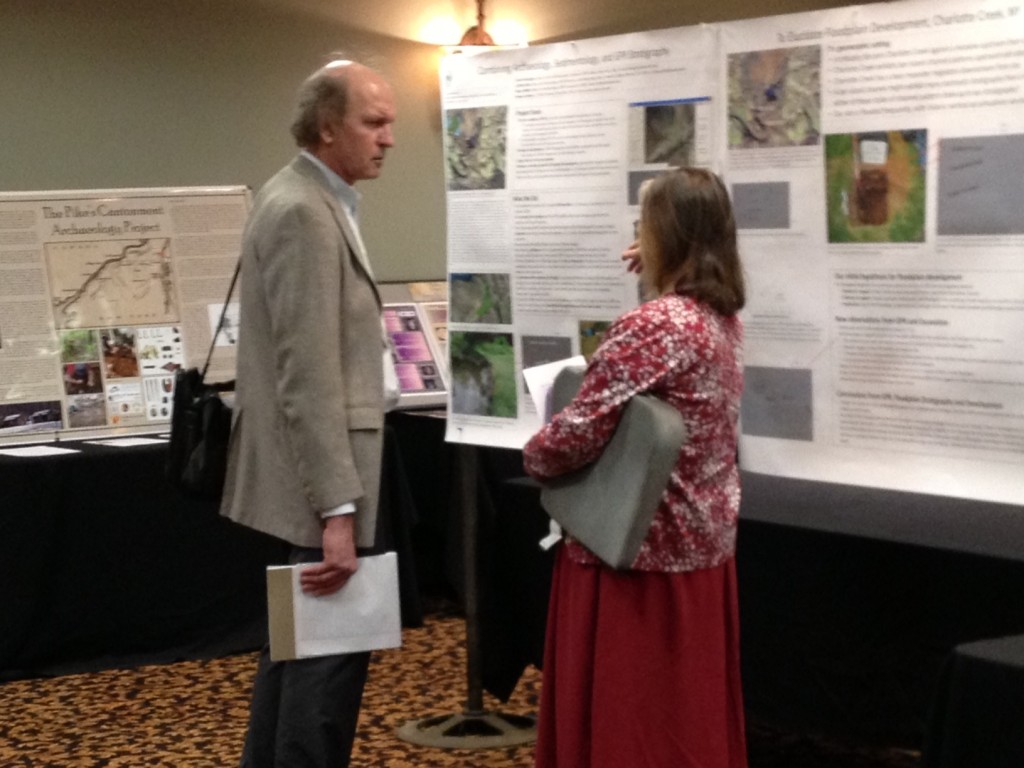 The great variety of information from Pine Lake was explored further in a series of excellent posters by these authors as well as students.  Additional poster authors include Leslie Hasbargen, Emmon Johnson, Kasey Heiser, Randoulth Palmer, Holley Reynolds, Amanda Phelps, and Marielle Genovesi.   Poster topics dealt with stratigraphy and floodplain development, archaeological features, aspects of the Archaic period at PineLake (including rare stone artifact types), experimental use-wear analysis, and the field school experience.  The extensive presentation of the Pine Lake project was distinctly refreshing to the NYSAA meeting, providing a good model for expanding NYSAA programs in the future, and bringing important information to the attention of others working in New York State archaeology.