In western culture the passing of October into November has long been regarded as a spooky time.  Insufficiently tempered with the Christian commemoration of saints, Halloween was thought of as a time when a door opens between this world and the one where ghosts and malevolent spirits linger.  In the ancient Irish calendar, November 1 was the first day of winter, and in historic times Europeans found the winter a good time to tell ghost stories.  For the historic Iroquois people of upstate New York, this late fall-early winter period was a time for harvesting deer from the forest, and then retreating to the longhouse for warmth, food, family, friendship, and story-telling. 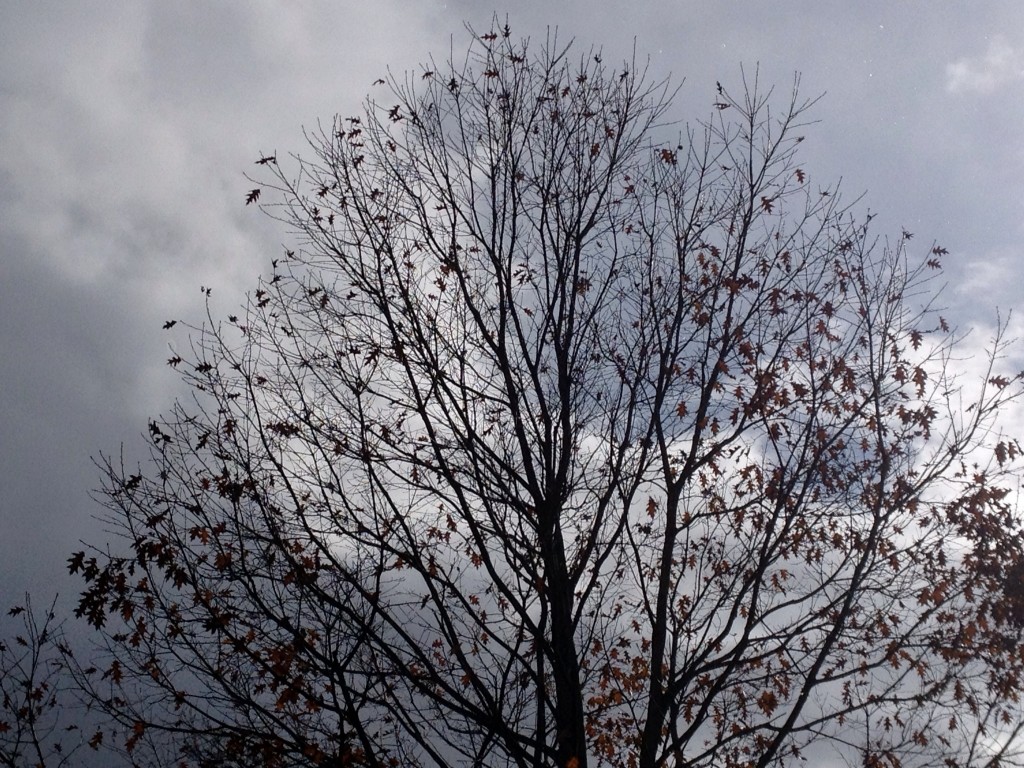 A long time ago, when the world was a very different place, the Iroquois of the Seneca tribe lived in great clearings that they made in the forests south of Lake Ontario.  Their longhouses were clustered in villages protected by strong stockades built to keep out any evil that might emerge from the woods.  In the summer the sun smiled upon the fields of corn, beans and squash that the women grew in the clearing between the stockade wall and the forest’s edge.  In the fall people told the story of the hunters who pursued the great bear in the sky, and how when the hunters killed the sky bear, his blood flowing to earth, colored the leaves of the trees red.  As winter came on, people ventured into the forest to hunt deer for food, hides, and the bones they made into tools when the snow was deep and people stayed by the fires in the longhouses.

But going into the forest to hunt was dangerous.  Bears and panthers lived in the woods, and when meeting a man or woman in the forest, it was difficult to know whether this was a human being or an evil spirit in a person’s form.  Despite this, people went into the forest to hunt every fall when it got cold and the snow threatened to fall.  A few people even lived in lodges in the woods.  However, one problem with people who lived in the woods was that the world was beset by evil caused by witches and wizards, even cannibals.  Dwellings in the woods were good places for them to work their dark acts without detection.

For example, the great Hiawatha, who later helped the Peacemaker convey the word of the Great Peace of the Longhouse, once was a horrid, ill-kempt cannibal who lived alone in a lodge in the woods.  Finding him there, the Peacemaker climbed the roof and peered through the smoke-hole.  At that moment, Hiawatha put a pot of water on the hearth to cook a meal.  Looking into the pot, Hiawatha saw the Peacemaker’s reflection in the water and thought it was his own.  It was the image of a good man with a rational mind:  a man who could think straight, listen well, communicate, and find agreement with others.  Thinking this was how he now was, Hiawatha was converted from his evil ways and became the Peacemaker’s companion and spokesman.  But that is a different story.

One year late in the fall, when the leaves were mostly down, a man and woman put their young daughter into her cradleboard and packing food and blankets, went into the woods to hunt.  They journeyed to the hunting ground where a friendly, helpful old man lived, hosting hunters and other visitors.  However, there was a problem at the old man’s lodge because some of the visitors disappeared or mysteriously died.  Nonetheless, it was a warm, welcoming place to stay in this hunting ground.  And so the couple and child went there.

The snow fell early during their trip, and the swirling wind piled it up.  The couple and child arrived at the old man’s lodge at night after struggling through drifts in the moonlight.  The husband called for the old man, but there was no answer.  Entering the lodge, they left the door open so the moon would light the interior.  Their eyes became accustomed to the dim light and then they noticed a platform against the opposite wall.  It had a long bark box on it.  Crossing the floor and peering into the bark box, they found the old man.  He apparently had built the box to crawl into and die.  Now he reposed like a man sleeping, but he had turned into a frightening skeleton!

The man and woman were cold and hungry, and decided to build a fire in the lodge, eat, and sleep before leaving in the morning.  After supper the fire died low while the man and woman slept on two sides of the fire place.  The baby cuddled with her mother.  In this haunted atmosphere the woman dreamed of ghosts, wizards, and witches.  Waking from her troubled sleep, the woman thought she heard a sound, like an owl crunching a mouse.  She looked around.  The firelight was low, but she could see a figure crouched near her husband.  It was the old man’s skeleton chewing her husband’s neck and face!

The woman was terrified, but quickly planned her escape.  Pretending to speak to her husband she said “Our daughter is thirsty.  I will take her down to the stream and get her a little drink.”  And she gathered the girl in a blanket and quickly went out the door.

Now the woman fled through the woods, holding the little girl close.  Soon she heard a loud howl from the lodge.  The vampire skeleton cried “The woman has deceived me!” and she could hear its running feet stomping through the snow and cracking dead wood.

The vampire skeleton shouted “Hoo! Hoo! Hoo” and closed the distance.  The woman was terrified but still fought to escape.  She tore off her robe and hung it to look like a person.  And then she ran on as fast as she could.  Again, the vampire skeleton stopped, tore up the garment looking for blood, searched for the bodies, and cried “The woman has deceived me!”  She heard it call “Hoo! Hoo! Hoo!” and break branches as it ran through the woods.

The woman and daughter were almost caught, but dawn lightened the sky and the woman saw that there was a village stockade straight ahead.  She burst into the clearing calling loudly for help.  The men of the village came out of the stockade with their clubs, saved the woman and baby, wrapped them in warm blankets, and told them that they were brave.  The vampire skeleton, blood on its teeth, glowered from the forest’s edge with burning-red eye sockets.  Then it turned and left, following its bony footprints through the snow.

After hearing the woman’s story, the chief said that people were wrong about the helpful old man in the forest lodge.  He had been an evil wizard, and dying, had become the vampire skeleton.  This was a great threat that they needed to end.  The chief instructed the men to dance in order to keep evil away, so they danced from morning until dusk.  When night fell they gathered their clubs and followed the winding, moonlit forest path to the house of the vampire skeleton.

They entered the lodge and found the vampire skeleton asleep in the bark box.  They lit a fire in the hearth.  Then the chief addressed the vampire skeleton formally:  “We have come to discuss with you the problem that evil is overcoming good in this world.  We need to act to restore the proper balance.”  Then some of the men closed the box with a great sheet of bark and tied it shut.

The men piled firewood around the bark box and set it afire.  They stood outside the lodge while the fire blazed, soon enflaming the entire structure.  The fire and smoke grew higher.  The men could hear the vampire skeleton crash the box to the floor and shout in excitement “Hoo! Hoo! Hoo!”, “Hoo! Hoo! Hoo!”  The flames roared and towered.

After a while, the lodge began to collapse as the fire died down.  The men felt joy that they had stopped the threat of the vampire skeleton.  Then, as the timbers and bark of the lodge parted with a loud whoosh!, a great owl flew out and disappeared into the woods.

Forever after this the Seneca refused to put the dead in boxes above ground, but buried them in the earth to keep them from rising and bothering the living.

This is a Seneca story that has been told and retold.  No doubt details have changed with the telling (as they have with this telling).  In the old days it would be a good thing to draw this tale out, prolonging story-time in front of the fire on a winter’s night.  The tellings of the story I read before recounting it are listed in the references below:

Sources for The Vampire Skeleton:

For more on the hunt of the Sky Bear (a tale told in the stars of the Big Dipper), see “Iroquois Star Lore:  What Does It Mean?”  In At the Font of the Marvelous by Anthony Wonderley (2009, Syracuse University Press).

For more on the story of Hiawatha and the Peacemaker, see The White Roots of Peace by Paul A. W. Wallace (1946, University of Pennsylvania Press).