When It’s Not about Turkey and Football: Review of The Mourning Road to Thanksgiving by Larry Spotted Crow Mann

Neempau:  “Well that’s fine, Sis, but why don’t you at least tell your kids the truth?  They don’t know anything about the true history of our people.”

Keenah:  “Tell them what, Neempau?  What truth?  That the white people have tried to exterminate us since they got off the boat?  How they almost killed us off with their diseases, slavery and laws saying that we’re not even human? Huh?  Then what?  Have them drop out of school and march on Washington to take our country back?”

Neempau:  “Yes, that would be a good start.”

Keenah:  “Oh Neempau, just what are you really trying to do big Brother?  You really think after a few centuries of Thanksgiving you’re going to change it? The world is not like you think it is.”

Whoa!   What is this conflict over Thanksgiving about?

Holiday-stress experts say not to discuss politics or religion when family gathers for Thanksgiving, but that’s not the way it is for Neempau, a Nipmuc Indian from the Worcester, Massachusetts area.  And after a decade away from home, he’s bringing a rather extreme message to his sister’s holiday celebration:  He wants to get rid of Thanksgiving.  And he wants Keenah and her family–  husband George, daughter Silvia, and son Robert to help.  And furthermore, he’s enlisting his willing, go-with-the-flow, pot-smoking wannabe actor cousin Wavy.  Wavy doesn’t think they’ll get rid of this feel-good national holiday, but is willing to drive Neempau around to circulate petitions.  How will a couple of thousand names on petitions get Thanksgiving repealed?  Maybe it won’t, but maybe they can at least get the Nipmucs to stop celebrating it!

As many note outside of the context of this book, Thanksgiving and other holidays can be stressful.  People may come together who rarely see each other, and even in close families there may be personality conflicts and sibling rivalries.  Perhaps someone drinks too much; people may say things they shouldn’t.  Conversations may drift into politics and religion, and unless everyone already thinks the same thing, there may be sharp points of disagreement.  But there is the chance for consciousness-raising.  I’m not necessarily talking about my family or yours, but you know what I mean.  When Neempau enters Keenah’s home for Thanksgiving, there is definitely some holiday related stress.  And the idea of the holiday itself is the pot in which contention boils, although other issues of Neempau’s, long bubbling, rise fast to the surface whenever the hot topic of Thanksgiving cools down. 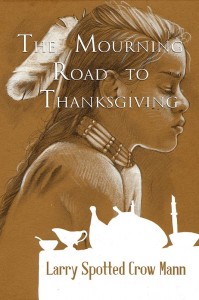 The Mourning Road to Thanksgiving is about a particular vexation for American Indians, a vexation that impinges upon New England Indians in a very special, historic way.  Thanksgiving for many Native Americans may be a symbol of the conflict and deleterious effect upon their ancestors, culture and land that began with the landing of the Pilgrims at Plymouth Rock.  Keenah, whose parents were Indian activists of the 1970s, put it succinctly in the passage above:  “they almost killed us off with their diseases, slavery, and laws.”  For New England Indians, the tragedy unfolded as the English colonists’ power grew.  The Pequot massacre of 1637 is an awful memory (the English and some Indian allies destroyed the Pequots in a particularly brutal attack, and sold many survivors into slavery).  King Phillip’s War of the 1670s is another bad memory.  This was one of the bloodiest wars ever fought on American soil, and the Nipmucs were one of the largest, most powerful tribes fighting the English.  The Nipmucs provided great military strategy and many warriors in this conflict, and they suffered greatly at its end.

The book title no doubt refers to the National Day of Mourning declared by Native American activists as an alternative to the Thanksgiving celebration.  As the archaeologists James Deetz and Patricia Scott Deetz relate in The Times of Their Lives:  “In 1970, Thanksgiving was declared a National Day of Mourning by Native Americans, and Plymouth was chosen as the location where it would be observed.”  Sometimes attendance has exceeded 5,000.  The drumming, singing and others aspects of the occasion overshadow other events in Plymouth, the community most symbolic of Thanksgiving.  The late James Deetz worked at Plymouth Plantation at the beginning of this annual event, and was equally an expert in New England and Virginia archaeology.  Noting that early European-Native relations were better and alliances stronger and more beneficial in New England than Virginia, the Deetzes suggest that Jamestown might have been a better place to stage the National Day of Mourning, except for the strength of the story of the Pilgrims and the First Thanksgiving.  Recently, a story has circulated that is a seemingly accurate revision of history.  It says that Indians were not really invited to the first Thanksgiving, but arrived because the Pilgrims were celebrating by firing guns.  Chief Massasoit and warriors of the Pokanoket tribe arrived quickly bearing arms because they had formed an alliance with the Pilgrims who they thought were under attack.  Learning the truth, they killed some deer and joined the feast.  This story is better documented than the story we learn in school, and to me a bit more interesting.  It is also interesting to explore when history is history and when it is myth.  In this case the Pilgrim myth, as the Deetzes describe it.

Aware of all this (the Pequot War, King Phillip’s War, the National Day of Mourning, and the questionable first Thanksgiving), the would-be iconoclast Neempau has reached the point where he finds it necessary to stop Thanksgiving (which in his eyes is disrespectful, awful, and based on ignorance).  He travels to the greater Worcester, Massachusetts area to launch his attack on this worst of holidays (except possibly for Columbus Day).  The story of Neempau’s crusade against Thanksgiving is poignant, touching, and sad at times, such as when he suffers as a boy at the hands of his teacher for refusing to put on a paper Indian headdress during his classroom’s Thanksgiving play.  It is also funny (I won’t give much away here), and to me, Neempau is a Scrooge-like figure in a tale that sometimes veers toward a Thanksgiving version of A Christmas Carol.  What I mean by this is that Neempau is an opinionated, misanthropic character who is unkind to many people he meets; people who, like numerous minor characters in A Christmas Carol remain true to their own more friendly characters and in touch with the holiday season.

The issues of race and racism run through this story, from an early encounter between Neempau and a drunk African-American man on a bus (which I thought unfortunately presented the African-American character in a stereotyped way with questionable use of dialect).  Through Neempau, Larry Mann raises the readers’ consciousness about anti-Indian racism and the problem of the rest of America knowing Indians through stereotypes and inaccurate history.  We also find that Neempau becomes particularly hostile to some whites who are interested in or trying to be involved in Indian culture and ceremonies.  The issue of non-Indians seeking Indians as objects of study is addressed, again through Neempau’s sensitized eyes.  Neempau himself has issues with Native acculturation that are blurred with circumstances of varying skin color and physical appearance among Indians.  This sort of internal race issue is something that non-Indians might not anticipate or otherwise contemplate.  More expectably, the issue of anti-Indian racism is also part of this story, and arises with a frightening tingle when Neempau, Wavy, and George (on an outing calculated to help them bond after Neempau’s long absence) encounter some racist, violent white men with a definite vengeful streak.

It seems to me that across America, non-Indians who live in or adjacent to Indian communities are more aware of anti-Indian racism than are non-Indians who live elsewhere, to whom this issue may be unknown or rarely considered.  There are many tribes of American Indians with different histories, experiences, outlooks, and voices.  Given this, even a concept of Indian-ness is problematic.  It is important that a book such as The Mourning Road to Thanksgiving can bring up ideas such as:   there are many Indian nations; that racism is a problem for Indians as well as others; and that for each of us, as we become aware of such issues and understanding develops, we (particularly non-Indians) are better able to consider the circumstances of Native America, and of tribes like the Nipmucs and people like Neempau and Keenah.  A book like this helps us to enter those discussions of politics (or religion) better able to consider the various sides of issues than to try to prove our point.

Rather far along in this novel, Neempau, Keenah, George, Silvia, and Robert attend the Nipmuc Sunrise Ceremonial, an annual ritual that coincides with Thanksgiving (i.e., non-Indian Thanksgiving).  The medicine man Martin Attuck, Sr.–  Wavy’s father–  also known as Healing Otter officiates at the ceremony.  As Neempau is waiting in line for spiritual cleansing and blessing from Healing Otter, he is angered by the presence of non-Indians helping with the ceremony.  He is as set in his lack of acceptance and kindness as Scrooge ever was.  But he is greeted with affection by Healing Otter, who soon gives thanks to the Creator in a morning prayer in the Nipmuc way.

Then Healing Otter told a story with a lesson, and the lesson was “Sometimes, my people, the hardest thing to do is to say we are wrong or made a mistake.”  Without giving anything away, I leave this review with a thought for consideration.  Is this a bit of foreshadowing?  Is there a circumstance yet to come in which Neempau, as converted to a new outlook as Ebenezer Scrooge, will bring a greater love into his heart?

The Mourning Road to Thanksgiving (195 pages) was published by Word Branch Publishing, Marble, North Carolina in 2014.

Some other books that touch on the historical context of Thanksgiving or on the spirituality, history, and culture of New England tribes include: