Posted by Edward V. Curtin on December 5, 2011 in Archaeology, Paleoecology | ∞ 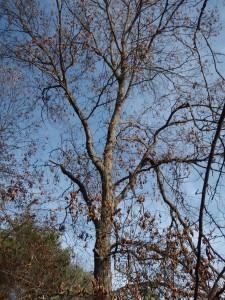 A tall hickory near the Vosburg site, November, 2009

in eastern North America has been summarized in the short Fieldnotes article, “Shaping the Forest with Fire–  A Very Old Native American Practice” (October 13, 2011).  Various studies in Tennessee, Kentucky, and Massachusetts indicate that by about 3,000-4,000 years ago, during the Late Archaic period, forest clearing was extensive and repeated enough for evidence to appear in paleobotanical and archaeological records, such as pollen from pond and bog sediments, and charcoal remaining from fuel wood in ancient Indian campfires.  These data inform us about the lengthy historical background of Late Prehistoric and Contact period human ecology.

The Phase 3 data recovery operations provided important radiocarbon dates and archaeobotanical information concerning forest composition change in this long-inhabited part of the Hudson River drainage.  Some of this information would even seem to have a bearing on the nature of the fragile Pine Bush ecology located on sandier soils immediately to the north.  Curtin Archaeological obtained this information by excavating the remains of several hearths and shallow pits at sites with the wonderful alpha-numeric names Site S11, Site RA-1/Locus 1, and Site 4/6.  I have nicknamed them with the more easily distinguishable monikers Wild Carrot, Bluff Top, and Goldenrod, respectively (Curtin 2011).

The Bluff Top site is the earliest of these, with a radiocarbon date of 4880 +/- 40 years Before Present, or BP (2930 +/- 40 BC).  This date is from a hearth in which oak, pine and elm were used for fuel wood.   A small pit feature nearby may have an earlier botanical assemblage, since it contained no evidence of burning within the pit, but had particles of charcoal that arguably were already present in the soil when the site was occupied and the pit was excavated.  The charcoal in the pit included only hardwoods such as maple and hickory.  The pit also contained a bannerstone in the process of manufacture, suggesting that the pit itself is about the same age as the radiocarbon date from the hearth.  If a sequence is involved, it may indicate the burning of hardwoods, possibly during forest clearing before the campsite was established.  Possibly later, about 4880 years BP, the hearth was created and pine and elm were burned in addition to oak.  The significance is that pine is an early re-colonizer of cleared land, while elm occupies moist, often streamside habitats that normally are relatively immune from forest burning. 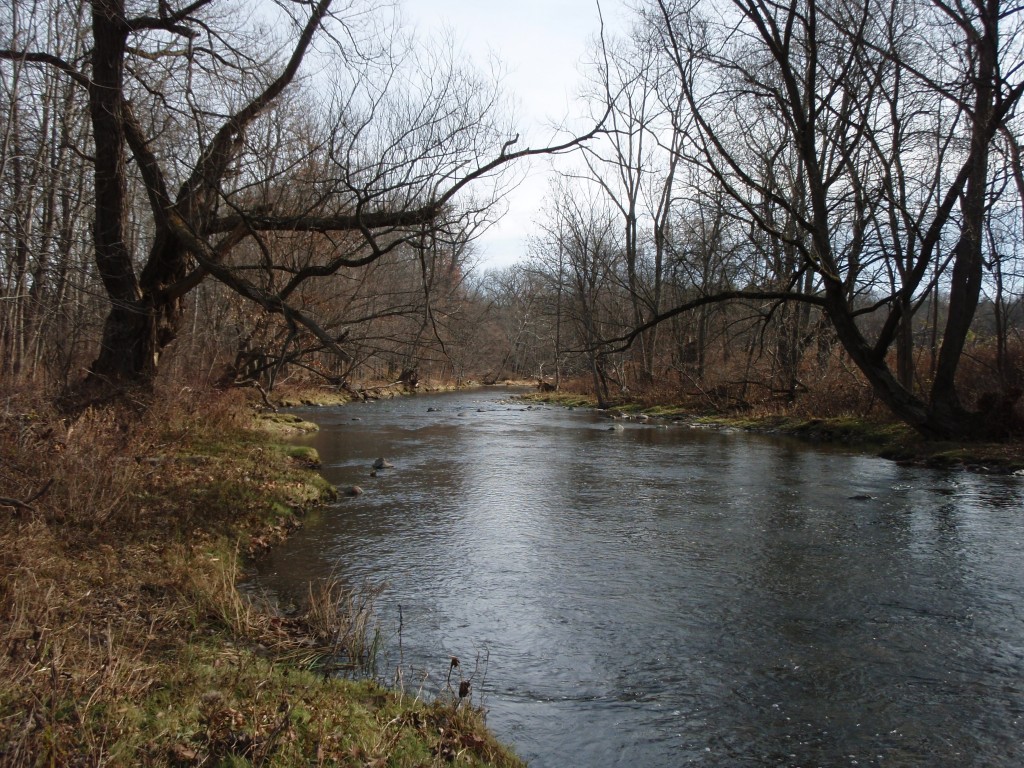 At the Wild Carrot site, radiocarbon dated somewhat later at 4040 +/- 60 BP (2090 +/- 60 BC), the fuel wood used was pine and elm, seeming to show some consistency with respect to a local habitat shaped by burning, clearing, and early stage reforestation. 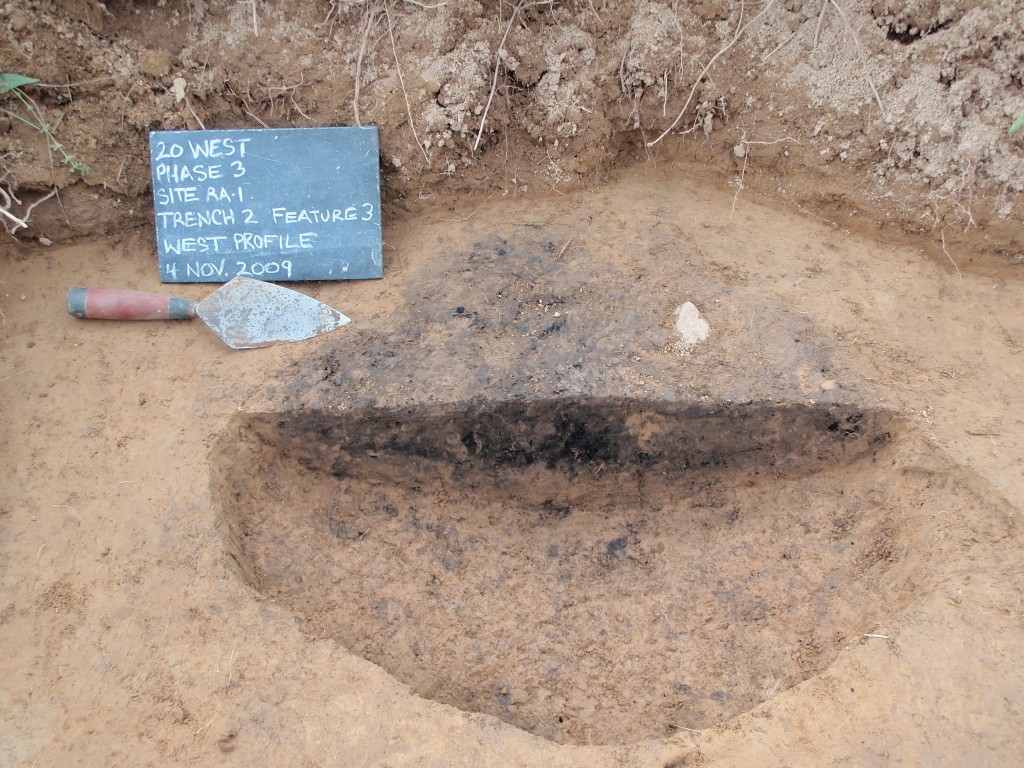 The Goldenrod site contained a hearth dated much later at 640 +/- 50 BC (AD 1310 +/- 50), in which the fuel wood consisted only of pine.  A reasonable hypothesis at this point is that from the Late Archaic period on, the landscape around the Vosburg site was partly cleared and partly re-forested with pine.  This apparently happened recurrently, or even regularly within the approximately 4000 year time frame covered by the radiocarbon dating.  The pine stands were the consequence of the regrowth of woods in previously cleared land, and may have been maintained by retarding other growth through the cyclical application of fire. This evidence may represent a shifting mosaic of cleared land and pine woods in the local area.  With respect to trees other than pine, elm’s habitat preference indicates that it grew along the Normans Kill or along poorly drained swales, places where damp conditions would have limited the spread of controlled fires set by Native American ancestors.  Some continuing availability of mast resources during the Late Archaic is indicated by the presence of oak in the fuel wood at the Bluff Top site, and in the presence of walnut-family shell fragments at the Wild Carrot site.

It is fair to ask how common was pine fuel at other northeastern sites? Shouldn’t some pine be expected in these samples?  Does the pine really indicate a humanly-altered local habitat?  This subject and related debates are touched upon in the August 12, 2011 Fieldnotes post, which discusses the likelihood that increased frequency of pine in the vicinity of Iroquois village sites indicates the reforestation of agricultural clearings.  In addition Asch Sidell (2008), providing a broad archaeobotanical survey of the Northeast, finds pine dominance of fuel wood samples in limited circumstances, and in her view, likely associated with new growth in abandoned clearings.

Some other, comparative information from the upper Hudson-lower Mohawk River region is available for discussion here.   As with the botanical information from the Vosburg Site Archaeological District, these data have been provided by archaeobotanical consultant Justine Woodard McKnight.  This information comes from several Phase 3 data recovery projects conducted by Curtin Archaeological in Hemstreet Park on the upper Hudson River; the Trailside site near Lake George; the Beck Farm site located in the interior part of Clifton Park, north of the Mohawk River and west of the Hudson; and a site referred to as 23B.1 in the Greene Business and Technology Park, Coxsackie.  There are a total of 12 additional samples from these sites.  The time frame covered is from the Late Archaic period 4050+/-40 radiocarbon years BP (2100 BC) to the Late Woodland period, 780+/-60 radiocarbon years BP (AD 1170).

Only 1 of the 12 additional samples contained pine charcoal.  This sample was from a deep pit at the Beck Farm site, which was radiocarbon dated 1710+/-40 BP (AD 240).  The pine in this pit feature was associated with white oak and other (unidentified) deciduous species.

One other sample contained charcoal from unidentified coniferous species; this could possibly be a second instance of pine.  The sample is from Hemstreet Park and is estimated to be 4,000-5,000 years old, based upon associated artifacts. The coniferous sample was associated with hickory, red oak, and unidentified deciduous species.  The diversity here suggests a mixed northern hardwood forest, not a new growth pine woods.

The other samples contained varying combinations of hickory, maple, and white oak, as well as unidentified deciduous trees.  Although this is a sample of only 12 archaeological features, it is consistent with Asch Sidell’s (2008) larger sample, and suggests that the area around the Vosburg site presents a case of recurrent or long-term human alteration of the Northeastern forest.  How unusual a case this is remains to be determined through the study of other areas in the Northeast.  The inferred forest alteration would seem to include clearing, but also may have included cyclical, controlled burns to clear out undergrowth and encourage biodiversity along forest edge areas. 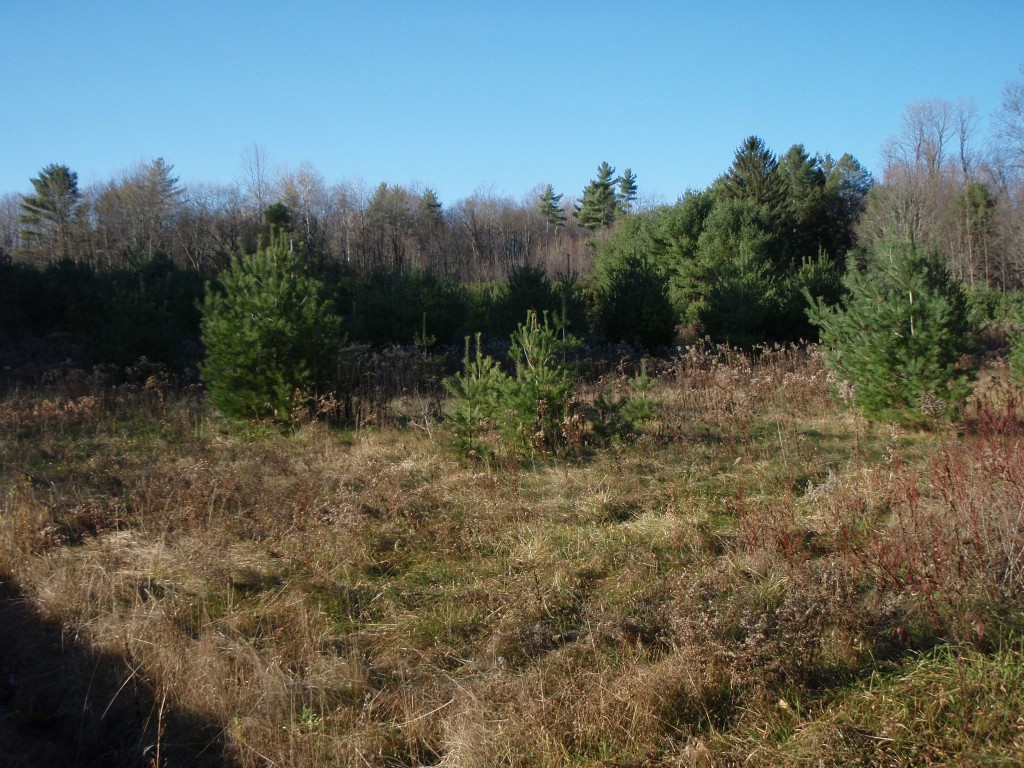 This analysis focuses on the possible significance of pine in some of the samples, and does not consider the possible significance of the other trees represented.  However, the presence of some of the other species in these samples may also indicate human effects on the forest.  Pyne (1997) is a very interesting and readable general source on this subject, while Asch Sidell (2008) and Delcourt et al (1998) provide very informative specialist analyses.