On Saturday April 28, 2012, several papers on Archaic period topics were among the presentations in the symposium honoring the late Al Dekin at the annual meeting of the New York State Archaeological Association (NYSAA).  This meeting was held at the Clarion Hotel, Poughkeepsie, New York, and was sponsored by the Incorporated Orange County Chapter of the NYSAA.  Papers that reported on research into the Archaic period (ca. 3,000-10,000 years Before Present, or BP) included:

These papers are part of a planned volume on archaeological and historical studies of landscape, technology, and scale that will be edited in honor of Al Dekin.  Appropriately, much of the data used derives from cultural resource management planning, survey, and data recovery projects, public archaeology, and field training.  My special interest is in the Archaic period and so I provide a brief preview here of the papers touching on the Archaic.

Dan Cassedy’s paper helps to refine the chronology of the Proto-Laurentian South Hill phase (some 5,000-6,000 years BP),  as well as the human use of the local Mohawk River floodplain, providing previously unpublished empirical data for comparison to Robert E. Funk’s concept of an eastern New York, Proto-Laurentian platform for the development of Late Archaic cultures. 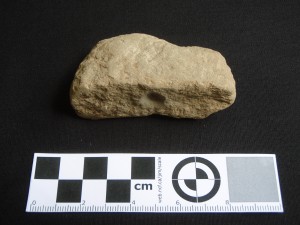 Bannerstone in process from a Late Archaic site in the Vosburg Site Archaeological District, Guilderland, NY

My paper looks at Late Archaic (ca. 3,800-5,000 BP) societies at several spatial scales, examining local landscape use outside of settlements and campsites; the relationship between settlements and their immediately surrounding landscapes; the interactions between neighboring communities; and the definition of regions through the mediation of social diversity around important places.

Nina Versaggi’s and Samuel Kuderle’s paper views a long temporal perspective of the Schenevus/upper Susquehanna drainage that includes both Archaic and Woodland sites, identifying the differently scaled environmental attributes or physical features that seem to have influenced hunter-gatherer perception and use of the landscape.

The range of this year’s NYSAA meeting papers presented on the Archaic–  in combination with last year’s (reported in Fieldnotes, April 21, 2011)–  provides strong examples of how Archaic period studies in the Northeastern United States are yielding important new information as well as significant new interpretations.