On April 16, 2010, during the annual meeting of the New York State Archaeological Association (NYSAA), Denis Foley presented a paper on medieval Irish sea-faring that I found very interesting, since I recently had done some reading on the subject of North Atlantic exploration.

During the middle of the just-passed, long, cold, snowy winter, I was looking for something to read that fit the mood.  As I stared at my bookshelf, an old volume called Northern Mists practically leapt into my hand.  Northern Mists…Brrr.  Reading this, I thought, would probably help me to laugh at the cold.

Northern Mists, by the great American geographer Carl O. Sauer, is the story of 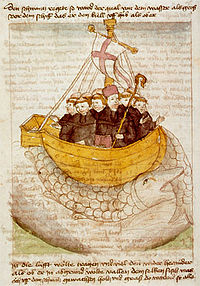 Atlantic (mostly North Atlantic) exploration before and contemporary with Columbus.  Published in 1968, it is somewhat dated, but covers much of the broad outline of what is known.   It covers the Portuguese, the Cabot brothers, the

Basques, the Norse Greenland colony, the Vinland voyages, and eventually, the legends of St. Brendan, the Isles of the Blessed, and Ireland the Great, a country that the Norse believed to lie in the western Atlantic near Vinland.   Sauer emphasizes that Greater Ireland is mentioned in Norse sagas as a place that many people knew about and could easily discuss as if it actually existed.

Still, the deeper past tends to hold on to its mysteries as we wade through possible evidence of what actually occurred.  One of the things that I learned from reading Sauer is that most of the documents that exist on the Vinland and Irish voyages are not historical in the way that many later documents are, but exist as evidence in a liminal position between orally communicated  folklore and contemporaneous recording of events.  As evidence, the Irish and Viking tales took many years, often hundreds of years, to record in documents.

Having just finished reading Sauer’s accounts of pre-Columbian exploration, I looked forward with great anticipation to hearing Denis’ presentation.  Since there was much more to say about this subject than could be compressed into 20 minutes,

Denis focused on the complex, multidisciplinary methodology needed to investigate this subject.  This complexity is especially necessary because the subject of medieval Irish sea-faring doesn’t reflect a short moment in time–  such as a single voyage–  but a tradition of maritime experience that began deep in prehistory, when Celtic people sailed (or rowed) to Ireland, and developed over time through the age of St. Brendan (ca. 6th century) to the apparent Irish colonizing of places such as the Faroe Islands and Iceland in the 8th and 9th centuries.  The variety of information needed to understand the context and process of medieval Irish sea-faring, as Denis showed us quite well, includes understanding pagan Irish mythology, the social context and structure of the early Irish Christian church (and no doubt its state of flux with respect to Druidic traditions and Roman Catholicism), early medieval Irish boat-building and sailing capability, current reinterpretation of pertinent medieval documents, and historic and contemporary Irish folklore about the sea, voyaging, and the voyagers.

The ultimate question is how far did the Irish sail during early medieval times?  This 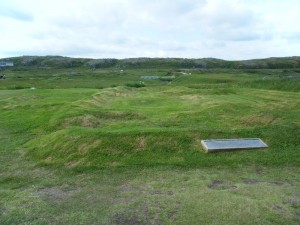 is a question that can make a room full of American archaeologists shift nervously in their seats (although some who were in the room are old enough to remember, pre-L’Anse aux Meadows, when questions about Norse voyaging to the Americas could also make archaeologists squirm a little bit.  Not that everyone was squirming and shifting at the NYSAA meeting).  Corroborating evidence of pre-Viking occupation of the Faroes and Iceland is of the slimmest sort, although short occupations by small groups may leave a largely invisible archaeological record.  No archaeological survey in Labrador, Quebec, Massachusetts, Long Island, the Hudson valley or other regions of eastern North America has ever found confirmed evidence of ancient Irish contact with America.  Several decades ago, the unsupported claims of books such as Barry Fell’s America B.C. seriously detracted from the subject of early Irish exploration as a serious concern.  Nonetheless, early Irish sea-faring into the North Atlantic is a serious subject, and Norse claims that the Irish occupied Iceland before them seem credible in the contexts in which they were presented, and support earlier Irish writing (The Norse saga of the Viking colonization of Iceland reports finding artifactual evidence that the Irish had been there, but had left).

What I like most about Denis Foley’s research design is that he has set up a methodology that has the potential to do two important things at the same time:  (1) clarify the nature of key questions (at what point is folk-lore of primary interest, and how, if at all, can we treat the early documentary record as history?); and (2) lead to greater understanding of the actual nature of early Irish sea-faring.  Obviously, should a medieval Irish site be found on the east coast of North America, it would be really big news, and surprising news for sure.  However, if we could better understand the context in which such a site could exist, its discovery (should it happen), would be a significant punctuation mark (perhaps an exclamation point) to the larger story of the maritime world of the early medieval Irish.  If no such site is ever found, it would be important to understand whether such things as the ship technology or cultural practices of the era presented significant constraints to long distance voyaging by the Irish.